Search
Cart 0
Menu
Bubba, he's existed for generations in small towns where there's little to do but "drive down to the lake and turn back around." 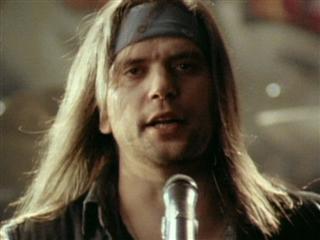 The following article originally appeared in the March/April 1989 edition of American Songwriter. Click here to purchase this issue.

I got a job but it ain’t nearly enough
A twenty thousand dollar pickup truck
Belongs to me and the bank and some funny talkin’ man from Iran
I left the service, got a G.I. loan
I got married, bought myself a home
Now I hang around this one-horse town and do the best that I can.

With these words, Bubba was born. More correctly, it was with these words that Bubba was consciously given an identity. He’s existed for generations in small towns where there’s little to do but “drive down to the lake and turn back around.”

Bubba may not be worldly, but he isn’t stupid, and it’s important to Steve Earle for people to realize that. Why should Steve care? Because Bubba’s a close buddy of his. He’s taken the heat for the controversial singer/songwriter more than once, when lines like “some funny talkin’ man from Iran,” and “you can’t get far on thirty-seven dollars and a Jap guitar,” resulted in accusations of bigotry.

“Giving Bubba a name and a face,” Earle explains, “started with me having to defend charges of jingoism, because of songs I’ve written. If you write in the first person, like I do, you have to develop characters. Otherwise the songs become very one-dimensional.”

The fact that critical listeners hurled such accusations at Earle is a testament to the realism of his characters. Speaking in the first person, Steve-as-Bubba was so convincing that Steve appeared to be his characters rather than simply being their mouthpiece.

Earle is the first to admit that Bubba’s opinions are somewhat uninformed, but he prefers not to settle for an easy stereotype when it comes to describing Bubba and his ilk.

“When Northerners call us rednecks,” he says, “I get irritated. People make quick stereotypes about other people without understanding why they think the way they do. Writing conversationally, I have to know what sounds right for a given character. Bubba was born out of trying to get inside a character and understand why they make the statements they make,” says Earle.

Earle perhaps described Bubba best in an interview for Music Row magazine, while discussing the character’s importance as a songwriting tool.

“Bubba works for a living. His world is thirty minutes of TV news that he watches when he’s very tired, and he doesn’t understand why everything that’s happening is happening to him. So he lashes out at the first thing that’s convenient. Bubba’s probably a little prejudiced and narrow-minded about some things, but not everybody has time to drink wine and talk about politics,” Earle says in defense of Bubba’s limited perceptions.

While Steve has proven his ability to breathe life into his characters on the page, they didn’t just appear from up a nowhere road. They came in part from Earle’s astute observation of people he’s known. If he seems defensive about Bubba’s short-comings, it isn’t solely to protect the products of his imagination. It’s also out of respect for the real individuals who have contributed significant portions to the rural hero of exit zero.

While Steve’s well-worn hitching thumb pointed him toward a lot of characters in his time, Bubba’s most significant influences nonetheless come from the stomping grounds of Earle’s youth –Jacksonville, Texas.

“If Bubba’s from anywhere, he’s from Jacksonville, a deep South culture,” Earle affirms. “Jacksonville has a population of about 10,000 –too small for anything to happen, but just big enough to hold you all your life,” says Earle, summing up one of the major themes in his writing.

“The people my dad grew up with there [in Jacksonville] are rednecks, but they’re real smart. You can’t imagine what they’d be like if they’d been born in a bigger town.”

One man Earle acknowledges as “a big part of Bubba” is his father’s friend, Bill Willis.

“He was a pipeliner, and he always managed to get laid off three days before deer hunting season. My dad used to say Bill Willis was his hero. Bill had a lot of control over his life. He had a little land, raised a few cattle, always had a nice truck…he made ends meet without a real job.

“He and my dad hunted in a place south of Jacksonville called The Big Thicket. It was dense, like a rain forest. There were a lot of great storytellers out there, like Body George,” Steve recalls. “He came from a poor, poor family –literally lived in a shack. By the time I was old enough to hunt, he was too old, so he just sat around and lied a lot. He used to swear there was a man in The Big Thicket that lived in the pine tops and ambushed deer with a knife. Later, when I got involved in folk music, I saw the parallels to that kind of storytelling.

“That’s the kind of storytelling I’m best at –straight-ahead narrative. It was much easier to write “Copperhead Road” than “My Old Friend the Blues,” Steve admits, affirming the seemingly universal writer’s fear of revealing too much of one’s own self.

It wasn’t just a reluctance to lay open his own soul that gave Earle difficulty during his fledgling days as a songwriter –it was also the realization that “being middle class, I didn’t have a damn thing to say.”

Taking his cue from Bob Dylan, who hid his own background behind an enigmatic persona patterned after folk legend Woody Guthrie, Earle set out to create an alter-ego of sorts.

“In order to have something to write about, I’m guilty of intentionally creating some of the tension in my life,” Earle says candidly. “My accent was picked up from hitchhiking around the South.”

With a knapsack full of experiences and potential characters derived from his travels–both past and present–Earle need not dig into his personal life for song ideas unless he wants to, as he did on the seemingly autobiographical “Hillbilly Highway” and “Guitar Town.”

“Highway” traces three generations and tells the story of how his father escaped what had formerly been his family’s small-town legacy, giving Steve a shot at a formal education. Ironically, Steve turned it down in an attempt to de-program his middle-class mentality, preferring to get his education on the road. Not surprising, coming from a man whose strongest personal statement to date might well be contained in “I Ain’t Ever Satisfied.”

“That song was written for medicinal purposes,” says Earle in typically dry fashion. “I had written songs about other people for Exit 0, but it was missing me, so I felt I had to do that.”

Earle’s presence in “Satisfied” however, doesn’t make itself conspicuous –the song could easily be a typical Earle character study, suggesting that there’s a bit of Steve Earle in most, if not all, the individuals which people his detailed, real-life lyrics.

While it’s unmistakable Bubba whose newfound freedom in “The Week Of Living Dangerously” begins with him tossing his kid’s car seat in a nearby dumpster, it isn’t that big a stretch to imagine a workaday-filled Earle getting a similar wild hair.

In “Angry Young Man,” only the final verse–in which the son’s protagonist escapes the small town syndrome–separates Steve from Bubba. Meanwhile, more tender songs like “I Love You Too Much” and “You Belong To Me” might lead the listener to assume it couldn’t be hard-headed Bubba. However, Earle insists that “the whole idea of Bubba is that he does have a sensitive side. He was tough, and had football pals, but he was different when he was with me. I really do treat him like someone I know. Bubba can talk to me about things he can’t talk to anyone else about. That’s why he hangs out with me.

“He probably is more sensitive than he admits. In that sense, there isn’t that much difference between us. I’m just more open about it.”

But whether it’s fact or fiction or a combination of the two, Earle’s songs are distinguished by a sense of disciplined craftsmanship that one might not expect from a writer with Earle’s unconventional tendencies.

“I don’t take anything away from craftsmanship,” Earle says. “Nashville is the last Tin Pan Alley. I encourage writers to learn from it, but also to find a way not to get caught up in it, to find their own thing.

“My songs,” Steve continues, “are more powerful and concise because I learned craftsmanship.”

While Earle’s pen is as powerful as ever on his latest Uni LP, Copperhead Road, he admits that he “wasn’t as conscious of Bubba on this album. The characters on Copperhead Road aren’t as everyday. But Bubba’s still alive. John Lee Pettimore (the pot-dealing Vietnam vet who kicks off the disc) is a version of Bubba. “Like Bubba on bad speed,” Earle says with a slightly dark chuckle.

Indeed, all of Earle’s characters are related in one way or another, through their similarities to Earle himself and well as in the traits that he admires in them.

“I’d rather be like them–this is, the real people they’re based on–than like any archetypical intellectual I can think of,” Earle admits. “They’re still having to deal with stuff on a day-to-day basis, living in the real world. I have a lot of respect for that.”