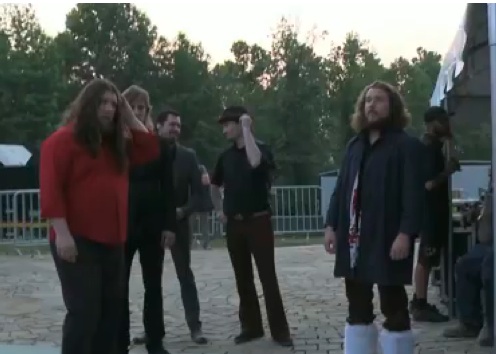 I got to the tenth annual Bonnaroo on Friday, fresh from Nashville’s CMA Fest, where I almost met Kellie Pickler. Time to see some music. But first, a stop at the comedy tent, to take in the 420 Comedy Blaze, and interview the cast of Workaholics.

Here’s a wrap-up: Jay Pharoah can still impersonate Lil Wayne, and Jay-Z (he always talks like he’s in therapy”), but he can do white people as well (his Gerard Butler from 300 is pretty uncanny.) Cheech Marin is a comedy legend, but definitely comes from a different era; his jokes about innapropriate acts with donkeys seemed so old school. And kids love oversized comic Ralphie May, who kept everyone rolling with pot jokes about Jesus.

The amiable, bro-hugging cast of Workaholics were the highlight though. They warmed up the crowd with a sketch, chugged some beer, and proved they could sing as well as rap, busting out a Tenacious D-style number about best friendship. Afterwards, the Comedy Central superstars discussed with us the difference between comedy festivals and music festivals, the bands they were most excited to see, and who was the best MC in the group. We’ve posted the video evidence here.

As hard as it was to leave the air conditioned tent, a day in the sun beckoned. Warren Haynes lit up the Which Stage with his tasty and talented band, who can rock a song six ways to Sunday – soul, rock, raga, what have you. His sax player, Ron Holloway, takes solos like a guitar player would, employing the same notes and attack. This is even more evident when Haynes and Holloway double up on the same line. “We killed it tonight,” Haynes’ keyboardist told the AP.

If you were in the front for the two-hour, high-octane My Morning Jacket concert, you know about the failed assassination attempt; a drugged up, “highly suspicious” and clearly dangerous dude kept trying to crash the stage. Each time he was thwarted by security, but he kept coming back. Finally, he was pinned down and hauled away by a phalanx of guards. The paranoid rock that the Jacket were pumping out as the whole thing went down made for an eerie soundtrack.

The big event show for Friday night was Arcade Fire. It was an exhilarating performance that, in an only-at-Bonnaroo moment, I dozed through much of. My neck was red from communing with Warren in the sun, and I guess I needed to catch those z’s somewhere. But Arcade Fire make excellent music to dream to.

Lil Wayne looked larger than life and full of swagger on the Bonnaroo big screen. He’s the rare rapper that doesn’t have any problems pulling off a live performance. But the music itself was lacking – generic-sounding hip hop that was big on bass and short on hooks and catchy samples. The glorified bar band playing “Louie Louie” in the beer garden next door had more going for them. Maybe next year they can do a collabo. 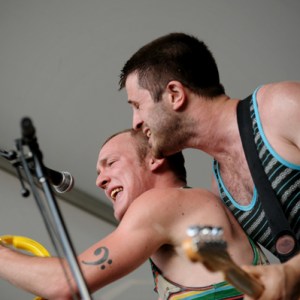