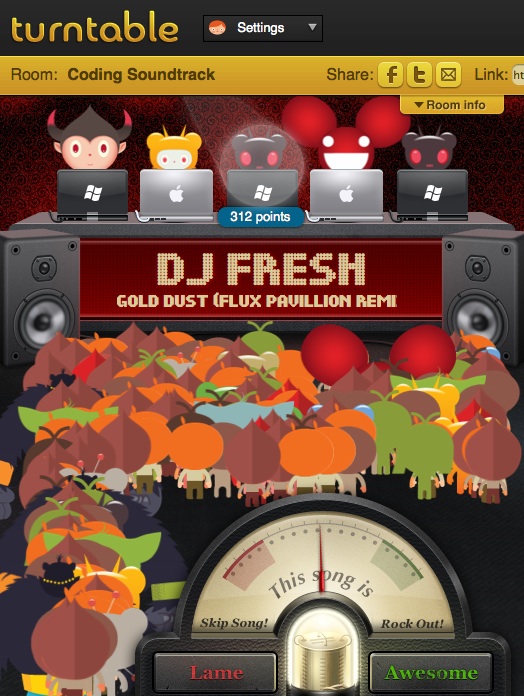 A new social music web service called Turntable.fm has been awash in praise by early adopters and the tech media. Like a lot of really good ideas, it’s simple: play music for your friends in chat rooms.

Currently, the site is still in beta and is invite-only. Users who have a Facebook friend using the service can log-in with Facebook Connect, while other users will need an invite.

Once you’ve gotten in the door, you can enter any number of rooms where there will be up to five DJs playing songs. The songs are provided by MediaNet, a digital content fulfillment service, though users can also upload their own songs.

If you like the song the DJ is playing, you can click “awesome” and your avatar’s head will start bobbing, and the DJ will receive points. When users don’t like a song, they click “lame” and if enough people agree, the song may get skipped. More points mean cooler avatars and more clout. You can also become a fan of a DJ and set up notifications for when that DJ starts playing in a room.

Like Google and Amazon’s music services, Turntable has not yet secured direct licensing deals with record labels, and some people have questioned the legality of the site. Similar to Pandora’s web radio service, Turntable.fm users cannot see what song is cued up next. Users also can’t play songs in a room by themselves, another loophole that helps keep Turntable within the legal gray area of the Digital Millennium Copyright Act.

The role of curation in the age of the all-songs on-demand celestial jukebox seems to be on the tip of everyone’s tongue. Much has also been made of the fact that 2011 seems to be a watershed year for digital music, with Pandora’s IPO, Apple’s iCloud, the impending launch of Spotify in the U.S., and Amazon and Google’s music lockers.

While Apple launched the iTunes add-on Ping, SoundCloud has offered users unique ways to comment within a track, and Spotify will bring more advanced sharing features for U.S. users, social discovery has seemed to be one piece of the music puzzle left unsolved.

The highly addictive and highly interactive Turntable.fm appears may turn out to be the best solution to this yet, though the site is growing fast and there are plenty of bugs that need to be worked out.

On a recent morning this week, there were a little over a thousand people logged in to Turntable. The way people are talking, before you know it that might be a million.