Imagine walking through a large, acoustically booming mall. That initial awareness of its never ending cycle of background songs can lead to any manner of misconceptions about who or what is being played, before the sound becomes clear enough for certainty. Fortunately, for most of those fractured interpretations, the music at hand isn’t meant to serve groundbreaking or emotionally revelatory purposes. And yet, for singer-songwriter M. Ward, it was a mall, of all the places, where he had his first meaningful encounter with the sound of Billie Holiday’s music. However, thanks to the cavernous space, his first listening experience was rendered sonically nebulous but that was also what made it profoundly memorable and unique.

“The combination of (Holiday’s) voice with these strings,” Ward explains. “This just incredible opposition of just immense sadness and beautiful strings was something I’d never heard before and it’s still something that I’ve never heard anything to match that.”

Just barely out of his teen years at the time, it would be understandable to accept the idea that Ward had never once prior heard Holiday’s repertoire up to that point in his life. All the same, when thinking about it, Ward admits the mall encounter likely wasn’t his first ever exposure to Holiday. Nevertheless, the fact that such a sonically distorted experience was the first one Ward notably and positively remembers, makes for quite a demonstration of how Ward’s musical awareness was actively transforming as he was growing up.

That fateful day and fleeting experience in the mall being more than 20 years ago, Ward’s fascination with Holiday’s musicality and repertoire persisted, re-emerging prominently in the early 2000s on his album Post-War, and eventually ending up getting a spotlight of its own through new album, Think of Spring. The record encompasses songs from Holiday’s 1958 iconic LP, Lady in Satin, as well the single, “All The Way,” which was originally sung by Frank Sinatra and captured on tape by Holiday near the end of her life.

While it’s common to find out that a song, voice, and-or record ends up sticking with a person through many years and life changes, that doesn’t mean one’s perception or appreciation of an artist and their work can’t transform in some way over time, just as it had for Ward from his teens through to adulthood, and now as an active musician.

“It was records like Lady in Satin that just revealed the possibilities of what you can do with music and arrangements and vocals and just the recording process,” he says. “(The album) sounded like something was a little bit broken, and I think that was the appeal.”

Looking back on his various life experiences, while there’s a undeniably large amount of change in Ward’s perception around the music of Lady in Satin, he also points out a connective line to his earliest approach to musical creativity and how he recalls that mindset whenever he covers others’ songs.

“Of course, you know, everything is untouchable on (Lady in Satin). But, you know, whenever I cover a song I’m not trying to recreate the majesty (of the original.) I’m experimenting with seeing how something sounds if I boil it down, if I boil all the elements down to just one acoustic guitar and one vocal, which is what I’ve been doing since high school when I first discovered a guitar and a four track. And so that’s the experiment (with Think of Spring).” says Ward.

Still, even taking into account natural shifts in conceptualization that come with time and a solidifying personality – much like the experiential contrast that exists when deciding whether to read books or view their film adaptations first – Ward remains appreciative of where and how Holiday’s art came into his life. This being the case even after finally having given Holiday’s music ample attention, countless replays, and dedicated scrutiny, rather than a fleeting glance while passing a slew of clothing stores.

“I listened to (Lady in Satin) and I’m sure I’ve looked into it, I’m sure, 1000 times. And slowly, all these different elements of the record, started to appear. And the most important ones are, you know, the emotional impact of hearing (Holiday) sing these songs and how (her performance) makes you feel.” Ward says.

That said, Ward is keenly aware of the fact that not everyone experiences art and music the same way. “I came to the realization that I was really the only person among my friends that was being consumed, being eaten alive, by this by (Lady in Satin). And that makes you feel a little like you found something really special.” he says.

Coincidentally, it was this wide spectrum of difference in feelings between himself and others that became the barometer for showing Ward just how deeply his emotions impacted him when listening Lady in Satin. It also showed just how driven he was to absorbing Holiday’s music from all its creative vantage points.

“(The music) gets combined with memories of your own life and there’s the entire right brain side of it (that’s) completely satisfied (when you’re listening).” Ward says. “And then on the other side (are) the more technical left brain things, which (on the album) are (presented through) these incredible chord progressions and these string arrangements, written by this guy, Ray Ellis.”

Think of Spring’s minimalist, acoustic, folk-leaning, and guitar-centric construction provides an enlightening and idiosyncratic connection to Ward’s meaningful memory. In this case, context makes all the difference for Ward’s heavily pivoted interpretations of Holiday’scuts, which might otherwise come across as, at the very least, artistically reserved. Interestingly enough however, unlike Ward’s planned approach of paring down the music of Lady in Satin, the very nature of musical exploration during the time of his connection with Holiday – a decidedly un-digitized affair – plays perhaps an even bigger role in shaping the impact of Think of Spring.

“There were no videos that I could Google or, you know, even artwork (either).” Ward says. “There was just this photo of her and so it kind of focused your imagination on the backstory of how Lady in Satin was made.”

Ultimately, ‘Don’t judge a book by it’s cover’ might be the biggest preface for listeners to remember when considering M. Ward’s genre-bending journey through this slice of Billie Holiday’s work on Think of Spring. Different aspects, from Holiday’s inherent impact and importance as an artist, to the highly distinct quality of her voice, to the timelessness of her repertoire, are significant enough to make the undertaking of Think of Spring appear like a path better left untraveled. However, Ward doesn’t take the challenge for granted.

“I’m still learning about (the music); even though, you know, I’ve consumed it so many times,” he says.

Seeing the album through a lens meant to highlight Ward’s personal journey with Holiday, just the same as he hopes to hear of others’ personal connections with her music, helps makes Think of Spring less prone to scrupulous comparison. It’s more of a musical relationship, described exactly it should be, because it’s made by the person who’s lived, and is still living, through it first hand.

“Any conversations I can have about (Holiday’s) music, I’m really happy to do it,” Ward affirms. “I love hearing all people’s stories about their connection to her music and her voice. To be African American, and a woman, in (the 1940s and 50s,) let alone, having the courage to sing all of these melodies – that are sung sometimes out of tune in the best way – is inspiring. And even though Holiday’s had this incredibly challenging life, you get lifted up with this music. Yeah it’s endlessly inspiring.”

M. Ward’s Latest
Get it on Vinyl, CD, or Digital
Buy from Amazon 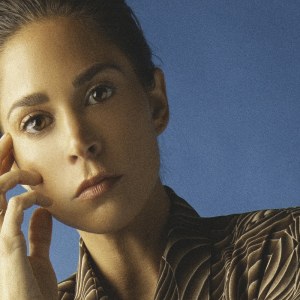