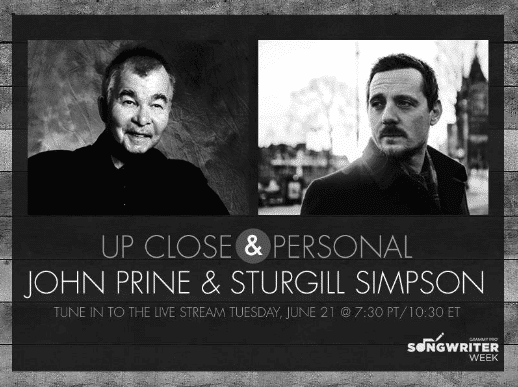 John Prine and Sturgill Simpson teamed up for a rare and intimate night of conversation and song at the Grammy Museum in Los Angeles on June 21, moderated by American Songwriter senior editor Paul Zollo.

As part of GrammyPro’s songwriter week, this was an Up Close & Personal evening in which the two songwriters discussed the origins of their songs and ideas about songwriting, as well as playing some of Prine’s classic songs, including “Speed of the Sound of Loneliness” and “Paradise.” As Simpson is a Kentucky native, and Prine wrote the song about his own family roots in the coalmines of Paradise, Kentucky, “Paradise” was the perfect choice.

During the conversation, Prine also performed portions of famous songs, including “Hello In There,” “Angel from Montgomery,” And “Sabu Visits The Twin Cities Alone.”

“Hello In There,” he said, was written using every chord he knew up to that point. Colored by his time doing a paper route that brought him to an old folks’ home, as well as his own time with his grandparents, it was musically shaped by an unlikely source: “Across The Universe,” by The Beatles. “Something about John Lennon’s voice with all that echo,” Prine said, “made me think of someone far away, like down deep in a well.”

It’s a song that has only ripened with the years in terms of pure poignancy. “Well, that’s because I’ve become one,” Prine said. “My wish all these years was someday to become an old person. And I made it.”

The name of the character in his iconic war-story, “Sam Stone,” he said, came because he needed a rhyme for ‘home.’ The broken radio, however, which recurs in the chorus, was based on a real broken radio he saw everyday.

And although the title of “Angel From Montgomery” most likely sprung from a vision of a woman in Montgomery, Alabama, birthplace of Hank Williams, he also allowed that it might have actually come from constantly passing a large winged gargoyle at the Montgomery Ward’s store in Chicago.

His entire career, he said, was due in no small part to the great championing he received from his friend, the late great Steve Goodman. When Kris Kristofferson told Goodman he wanted to bring him to New York to get a record deal, Goodman said, “You think I’m good? You got to hear my friend John Prine.” That insistence – so rare in a business where self glory usually trumps all other concerns – led to Prine’s signing with Atlantic, where he made his great self-titled debut, containing a chain of masterpieces.

It was a surreal journey for this man who only months before had been delivering the mail in Maywood, Illinois. During his first week in Manhattan, Kris invited him over to Carly Simon’s apartment, where Bob Dylan and others were swapping songs. All were absolutely stunned by the songs Prine sang. That week, during his first performance in New York, Prine was joined onstage by Bob Dylan, who both sang and played harmonica.

Prine described, with much characteristic warmth, that tale and others, as the audience in the venue, and an international audience tuning in to the live webcast from all corners of the globe, delighted in the singular wisdom and whimsy from this legend of songwriting.

Sturgill Simpson, the current cover-subject of American Songwriter, chose not to perform any of his own songs, preferring instead to focus the spotlight on Prine. “It’s his night,” Sturgill said. “I am honored to get to be here with him. I know John, I’ve played music with him. And I am still in absolute awe. ”

This is a short portion of Simpson and Prine rehearsing “Speed of the Sound of Loneliness” in the green room prior to the show, shot by Zollo: 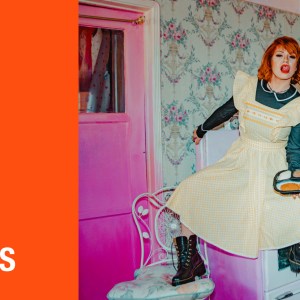 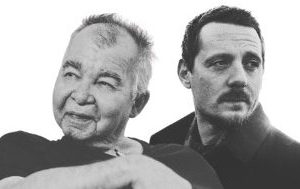