Jimmy Buffett’s brand of easygoing, sun-drenched tropic rock has the ability to transport listeners to a land of sand and surf where the drinks are strong and the worries are few. It’s a leisurely style that would feel unattainable if it weren’t for his blissful, relatable songs of sunburnt sailors and average joes with drinks in their hands.

His music has become a lifestyle, one he has franchised to create an empire of easy living and a good time for all.

A song about a woman being circled by “land sharks,” or men attempting to pick her up, “Fins” is irresistible with its tropical rollick and good time swing.

The casual croon and faraway strums of “Grapefruit – Juicy Fruit” moves like waves for a sway-inducing listen. Easy, breezy, and beach ready, it may blend into the background easily, but it’s a Buffett essential all the same.

You can’t help but bob along to the Calypso-tinged “Volcano.” Recorded in Montserrat, the trop-rocker was nervous about the Soufrière Hills volcano that was located on the island. The song is about an impending eruption and where he’ll land in the aftermath.

A steel drum-glimmering hit, “Boat Drinks” is a song reminiscent of warmer weather. It was reportedly written during a bout of homesickness in chilly Boston. Mentions of hockey games and 20-degree temperatures frost over the tune as Buffett begs for boat drinks.

It’s those changes in latitudes, changes in attitudes / Nothing remains quite the same / With all of our running and all of our cunning / If we couldn’t laugh we would all go insane, is one of Buffett’s more philosophical tunes. It still has that trademark tropical catchiness but also carries notes of seriousness as Buffett reflects on where he’s been.

A song all Parrotheads should know by heart, “Cheeseburger In Paradise” is a Buffett signature. The impassioned ballad about hankering for a cheeseburger was born from something that actually happened to Buffett while on a long boat trip.

The singer is quoted as saying, “The myth of the cheeseburger in paradise goes back to a long trip on my first boat, the Euphoria. We had run into some very rough weather crossing the Mona Passage between Hispanola and Puerto Rico and broke our new bowsprit. The ice in our box had melted, and we were doing the canned-food-and-peanut-butter diet. The vision of a piping hot cheeseburger kept popping into my mind.”

When they finally made it to land on the island of Tortola, he explained they kissed the ground and then headed to the marina restaurant where an American cheeseburger was on the menu.

Yes, I am a pirate, two hundred years too late / The cannons don’t thunder, there’s nothin’ to plunder / I’m an over-forty victim of fate / Arriving too late, sings Buffett is the softly shuffling “A Pirate Looks At Forty.”

The melancholy song is based on a modern-day pirate character the singer met in his youth. It holds a bittersweet nostalgia for a bygone era of swashbuckling and plank walking.

A musician who has toured extensively throughout the years, Buffet wrote “Come Monday” after having spent a long time away from home. He wrote the song for the woman who would soon be his wife, Jane.

Come Monday It’ll be all right, he sings. Come Monday I’ll be holding you tight / I spent four lonely days in a brown L.A. haze / and I just want you back by my side.

A Parrothead anthem, “Margaritaville” illustrates the laid-back lifestyle that Jimmy Buffett and his music have become synonymous with. The song brims with visions of flip-flops, beach chairs, and sunshine, but reveals a darker reality as it comes to a close.

As the choruses progress—each time achieving a bit more clarity—the song reveals a drowning of sorrows and denial over a failed romance. The final chorus plays, Wasted away again in Margaritaville / Searchin’ for my lost shaker of salt / Some people claim that there’s a woman to blame / But I know, it’s my own damn fault.

“Son Of Son Of A Sailor” was inspired by one of Buffett’s biggest influences, his grandfather. An adventure in a song with its airy instrumentation and lonesome harmonica flourishes, it is a bittersweet homage to the men who came before him and informed his music.

A note from Buffet on his website, explained, “I saw a picture of my grandfather after he had come back from a trip to Nova Scotia. He was born there but left when he was a young man and didn’t return until he was 84. He was standing on the dock staring at an old sailing schooner, and the look on his face told the story of where he had come from and where he had been. I have always been very proud of my heritage as a sailor and wrote this for the men who taught me the skills.” 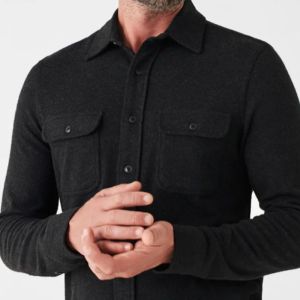