His slicked-back raven hair and a perceptive peer behind darkened shades, Roy Orbison was also a “Man in Black.” Primarily in head-to-toe black clothing, Orbison crooned through country and rockabilly tales of breakups, heartache, and lonely days. From his earliest crack at songwriting—and the first song he ever wrote—”Go Go Go” for his group The Teen Kings in the mid-’50s to his later experiments with sound, incorporating a more doo-wop sway on his first major hit “Only the Lonely (Know the Way I Feel)” in 1960.

Over a 30-plus year career with hits like “Running Scared” and “Crying” in 1961, “In Dreams” in 1963, and his 1964 classic “Oh, Pretty Woman,” every song was distinguishable by his piercing tenor and dramatic falsetto. Orbison earned the nicknames “The Caruso of Rock” and “The Big O” for his near-operative voice. Through his introspective storytelling, Orbison introduced more vulnerability in song—something rarely delivered in rock and roll in those days.

Living through a downturn in his career and personal strife throughout the 1970s, Orbison had a resurgence in 1988 when he co-founded the Traveling Wilburys with Bob Dylan, George Harrison, Tom Petty, and Jeff Lynne before his death on Dec 6, 1988, at the age of 52. His Wilburys contribution “You Got It” was released posthumously in 1989 and became Orbison’s first song to reach the top 10 in nearly 25 years. Orbison only performed that song once on Nov. 19, 1988, at the Diamond Awards Festival in Antwerp, Belgium, 17 days before his death, and played his final concert at Highland Heights in Akron, Ohio on Dec. 4, 1988.

Throughout his career, Orbison wrote a catalog full of his own songs, along with some he shared with other artists—several of which he recorded himself later on.

Here’s a look at seven songs, released in the late ’50s through early 1990s, that Roy Orbison wrote for other artists.

Johnny “Peanuts” Wilson was a member of The Teen Kings with Roy Orbison in 1956. When Peanuts went off on his own as a solo artist, he released a handful of singles, including “Cast Iron Arm,” a rockabilly tale, co-written by Orbison, of a guy defending his girl when another guy tries to make a move on her. Wilson continued on in music as a songwriter himself, penning songs for Loretta Lynn, Conway Twitty, Bobby Vinton, Brenda Lee, Tommy Overstreet, and more.

Before Roy Orbison released the crooner “I’m in a Blue, Blue Mood” off his seventh album, There Is Only One Roy Orbison, Conway Twitty had the first crack at it on his album, Portrait of a Fool, a collection of songs crossing rock, pop, and country.

Buddy Holly recorded a number of Roy Orbison’s songs throughout his short career. On The “Chirping” Crickets, the debut album from the Buddy Holly-ed group The Crickets, and the only album released within Holly’s lifetime, two Orbison tracks were featured, a cover of The Teen Kings’ “An Empty Cup (And a Broken Date),” written by Orbison and Norman Petty, and “You’ve Got Love,” which Orbison didn’t record. Orbison later contributed “Lookin’ for Love” for Bobby Vee and The Crickets, released in 1962.

Country singer Arlene Harden’s most successful release was a cover of Roy Orbison’s 1964 classic “Oh, Pretty Woman,” titled “Lovin’ Man (Oh Pretty Woman).” On her 1970 album, Arlene Harden Sings Roy Orbison, the singer pulled a song from Orbison’s growing catalog that he had yet to release himself called “Precious.” Orbison’s version was later released on the 107-song compilation The Soul of Rock and Roll in 2008.

“See Ruby Falls” was a phrase often painted on barn roofs in the south directing visitors to a waterfall in Chattanooga, Tennessee. Roy Orbison and Johnny Cash wrote the song after seeing a billboard with the phrase directing them to that very waterfall but weaved the lyrics around a girl named Ruby leaving the singer for a more exciting life under the red light downtown. Recorded in 1969, the song appeared on Cash’s 33rd album, Hello, I’m Johnny Cash, and reached No. 4 on the country chart.

Well I new someday, Ruby would be leavin’
That she wasn’t happy livin’ quietly, quietly
‘Cause she would get the bedroom look each mornin’
And I felt Ruby pull away from me

Yeah, so go downtown about nine o’clock this evening
Walk under that red light and down the hall, down the hall
Look for the highest flyin’ girl, that’s Ruby
And if you wait your turn you’ll see Ruby fall

Written by Roy Orbison, Will Jennings, and Rodney Crowell, “When the Blue Hour Comes” was released on Crowell’s fourth album, Street Language, released in 1986. Co-produced by Booker T. Jones, the album features a collection of soul and country tracks, including “Looking for You,” written by Crowell and his then-wife Rosanne Cash, and “She Loves the Jerk” by John Hiatt. “When the Blue Hour Comes” is a song Crowell described as “Percy Sledge meets the Beatles.” Joan Osborne later covered the song in 2006 on her fourth album, Pretty Little Stranger.

In 1992, Crowell released “What Kind of Love” on his seventh album, Life is Messy, which was written by him and Jennings, using a melody Orbison had recorded before his death. The song also features backing vocals from Linda Ronstadt and Don Henley.

Orbison’s name rarely floated in the freestyle music realm with the exception of “As Long as I Can Dream.” Written by Orbison and Diane Warren for the girl group Exposé, “As Long As I Can Dream” was featured on the group’s third self-titled album and also features guitarist Al Pitrelli (Trans-Siberian Orchestra, Megadeth, Alice Cooper). The ballad is one of encouragement during hard times. 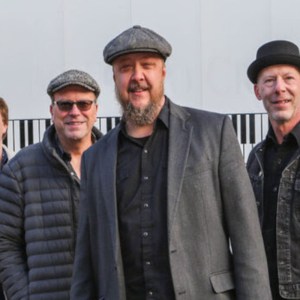