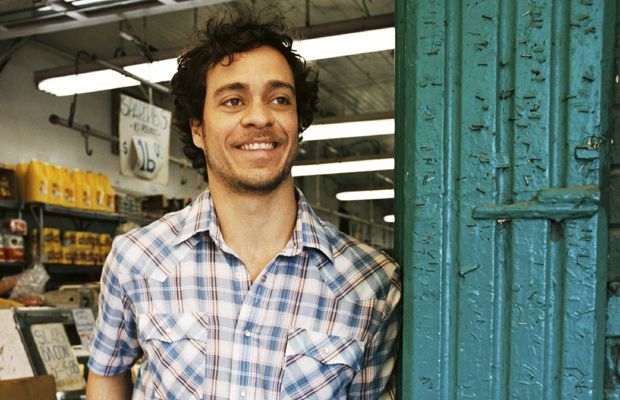 Before the days of singing with Patti Griffin and Alison Krauss, opening for Bob Dylan and Elvis Costello, and having a number one album on the Billboard charts with Mission Bell, Amos Lee spent his time as a second grade teacher and a bartender. His latest record, Mountains of Sorrow, Rivers of Song, is out now. Amos took some time to chat with us about his love of emojis, his three least favorite words, and how annoying shoelaces and airports can be.

Mountains of Sorrow, Rivers of Song is the new record. It’s a real collaborative idea. My touring band and I, and some really special, talented people all gathered in Nashville with Jay Joyce and recorded a group of tunes we all felt worked together.

I loved making both MOSROS and Mission Bell. Had a chance to work with amazing people and musicians, and honestly had a blast doing both. I guess the biggest difference this time around is that I used my touring band and worked with Jay.

How did you end up getting Patty Griffin on the album?

Patty ended up on the record mostly because I love what she does and Jay knows her. Sometimes I just hear voices in my head, and when it’s Patty I can deal with life a little better, so it was amazing to be able to share some song space with her.

How about Alison Krauss?

Alison and I met in Scotland when Jerry Douglas put the Transatlantic Sessions together. She did a version of “Dimming of the Day” that made time stand still. I remember sitting there while she was singing, looking out on this Glen in Scotland thinking that there may never be a more perfect moment to exist. I was really honored that she and Patty took the time to sing with me.

It all started for me with John Prine, Bob Marley, and Joni Mitchell. Mose Allison, Townes, Bill Withers, Gram Parsons, Stevie Wonder. Lucinda, and through her I got into Blaze Foley who I have been listening to a lot of lately. The first story song I ever really remember loving was Copacabana, but after that it was “Loves Gonna Get’cha” by Boogie Down Productions. I grew up listening to mostly hip-hop, so stuff like A Tribe Called Quest, Grand Puba, Gang Starr, Mos Def. The list gets pretty long. Also a big fan of D’angelo, Babyface, Mint Condition, just tons of folks. This would go on for 10 pages if we started to talk about people who I love. Also not to be overlooked are folks from Philly who were real inspirations to me starting out. Cowmuddy, Birdie Busch, Adrien Reju, Kenn Kweder, Ben Arnold, Mutlu, Chris Kasper, The Rev Leroy Montana, Herb, Kevin So. All these folks I played with and still love listening to.

I started writing about 6 months after playing guitar. As soon as I could get between A minor and C major I was in business. Were they good? Who knows? I would like to think so. Are they good now? I would like to think some people find some good in them, but to me they’re all ideas and moments that kind of exist in a bubble. I try not to bust them before they get round. So, I don’t really think about them like good or not good. Just round or not round, and if i bust ’em up too early with an idea of good, they never get a chance.

“Its so hard to be in love/never knowing what the other’s thinking of.”  Those were the two lines I remember from the first thing I remember writing. Just back and forth between C and A minor. I still know it exactly, I don’t recall the rest of it, but that idea was definitely the first thing I ever remember writing. It felt pretty good to get that off of my chest at 18. I need an emoji right now. I’ve become far too dependent on emojis lately. I wonder what Hemingway would have thought of those. Little smiley faces, or angry, brooding lion hunting emojis? Who knows.

The last thing I started? Lots of those.

I think Satchel Paige said it right: “Sometimes I sits and thinks, and sometimes I just sits.” That’s how I write. My couch takes the credit.

I don’t edit a whole lot. I freestyle rap, and whatever happens, I keep. That’s half true.

I think I probably finish 40 percent? I could probably calculate this precisely, but I have probably lost over 1,000 songs over the years to lost books, napkins, 4 track tapes, and computers. How many do I like? 2 percent after I’m done. Within 5 minutes of writing them? I like 100 percent. The liking diminishes pretty rapidly, but I’m OK with it all.

I don’t know what inspires me really. People I guess. I never really thought about anything specifically. What inspires a curve ball? Gravity and velocity, a certain grip, how you see a landing place, where you want something to break. All of that.

If I have to pick one, I would probably say the title track because it’s written to someone that helped me out of a dark place. I will always think of that song and its place of origin in a very strong and centered place.

I’m rarely fond of things in general (insert emoji.) Lyrically, on this album? I don’t know, the word fond to me is a little like the word moist. I can’t think of those in a way that doesn’t gross me out a little. Oh, it says “a fan of.” I misread that, but I’m gonna stick with fond. It makes the answer easier.

It depends on the song. When they come easy, it’s always good. Filter gets better, but the wonder ain’t as pure.

I think I discussed this earlier, but “moist,” “fond,” “burgeoning.” Those words I don’t love. I do like the word “opossum.” Also “gnudi.” “Kerfuffle” is a good one too. I really like “jalopy.”

I had a really amazing moment with a wounded soldier when I played the White House on the Fourth of July. The majority of the crowd seemed rather disinterested, but I played a song I wrote about a solider I met, called “Out of the Cold,” and this young man limped to the front of the stage and stood alone, looking me right in the eyes the entire time I was singing it. He was crying, and at the end he sort of just fell down, and I felt as moved as I have ever felt playing music. The whole point of the schlep of this life is to share some joy and pain – unless you’re like Thoreau or a mountaintop monk. But for me, music helps me do both. We get to share joy and pain and open up our little boxes and let people look in and take what they want.

I used to write a lot more — plays, short stories, essays — but lately pen and paper seem to escape me and I wind up getting distracted by electronics before any ideas settle. I’m just glad guitars exist mostly in the reality realm. I can still escape with an idea or two before I go down a rabbit hole.

Underrated by songwriters or by the public? Kind of two different things. The general public sleeps on a lot of great writers. Maybe you just mean me? Like who do I think that of? I guess if I like them, I don’t think they’re underrated. I guess I wish more people knew about Blaze Foley. 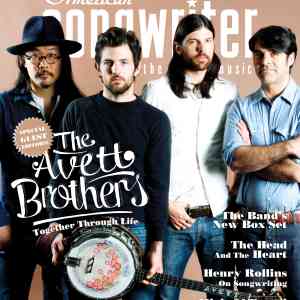 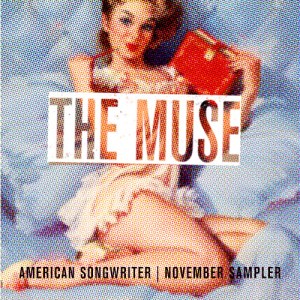