Wesley Stace, aka singer/songwriter John Wesley Harding, shared a previously unseen video today of a 2010 performance with Bruce Springsteen, filmed as part of a longer conversation with US Poet Laureate Robert Pinsky where the three discussed the relationship between poetry and music. In the video, the musicians play acoustic guitars and sing Springsteen’s “Wreck On The Highway,” with Stace taking the bulk of the vocals and Springsteen adding double-stop guitar fills, occasional harmony and lead vocal line.

The event was held ten years ago this month at Fairleigh Dickinson University’s WAMFest (Words and Music) festival and was billed as “Jersey Rain: Robert Pinsky and Bruce Springsteen in Conversation and Performance with John Wesley Harding” The audience primarily consisted of students of the university and numbered less than 400. The festival’s event organize David Daniel, an FDU professor, received permission from Springsteen’s management to release the video.

The two songwriters had previously performed the song, the closing cut from Springsteen’s 1980 The River album, live in 1994 at McCabe’s Guitar Shop in Santa Monica, and Springsteen also had Stace open for him for two nights in 1995 at the Berkeley Community Theater during his Ghost of Tom Joad tour.

Stace offered a detailed essay about the event on his website right after the event’s conclusion in 2010, which he reposted on his Facebook page today. Parts of that recollection are below, along with two videos posted by Daniel.

Both Pinsky, a distinguished poet who takes inspiration from jazz musicians, and Springsteen were born in the same hospital in Long Branch, NJ, though nearly ten years apart. The pair had never met until one hour before the WAMFest event.

“Here is what I wrote about this total one-off event on the website on 7th May 2010.

“It’s been an amazing week of “Words and Music” (WAMfest) events at Fairleigh Dickinson.

On Thursday, in what can only be discussed in the “dream come true” category, two poet laureates (one official, one unofficial), Robert Pinsky and Bruce Springsteen, discussed words, music, New Jersey, getting old, being public figures, and everything else under the sun, not to mention the fact that that also played, sang, read and recited. All houses were packed, all audiences happy. And, most importantly, artists and musicians discussed their work for students who themselves are would-be writers and artists.

Yesterday’s setlist, not including the conversation:

Samurai Song (read by Bruce, accompanying himself on guitar, segueing into…)

Darkness on the Edge of Town (sung by Bruce)

Shirt (read by Robert, accompanied by Bruce on guitar and harmonica, segueing into…)

The River (sung by Bruce)

Explanations (read by Bruce, accompanying himself on guitar, segueing into…)

Born To Run (sung by Bruce)

Antique (read by Robert, accompanied by Wes and Bruce on guitar)

Jersey Rain (read by Robert and Bruce, accompanied by Bruce on guitar, seguing into…)

Promised Land (sung by Bruce, with backing vocals by Wes and Robert)

The Want Bone (read by Robert, accompanied by Wes and Bruce on guitar)

Lines (read by Bruce, accompanying himself on guitar, segueing into…)

Wreck on the Highway (sung by Wes and Bruce)

Many other poems or fragments of poems were read or recited (Walter Savage Landor by Robert, for example) but these were the main performances in order.

By mid-morning, I’d planned my questions (mostly in my hotel room that morning, when I read a bunch of Robert’s fascinating essays from Slate, and found some amazing quotations that linked Bruce and Robert – which, after all, was the reason we’d pursued the pairing in the first place: finding out they were born in the same hospital ten years apart was quite surreal). But I could never have planned what actually happened, and if I’d tried, it wouldn’t have been half so good.

The magic began in the dressing room, when the three of us were gathered, and soundcheck was done (we ran Wreck on the Highway once). We went through the rough order of events. There had been various practical debates about whether songs should be sung sat or standing etc, but once we started talking, everything became very straightforward. I was going to offer them some of the questions so they felt comfortable, but this was hardly required.

I knew that Bruce had agreed to the event because he knew and respected Pinsky’s poetry – we’d talked about Pinsky’s poem “Jersey Rain” – and because it was going to be fun. He turned up with two annotated copies of Pinsky’s verse and made the wonderful suggestion that he might read certain of Pinsky’s poems, accompanying himself on the guitar, before he segued into songs of his own that he felt related to them. Once that masterstroke was incorporated into the masterplan, the set list pretty much fell into place. I’d asked Bruce to play a couple of songs, but when it looked like he was going to give us Darkness on the Edge of Town, The River, Born to Run, Promised Land, Nebraska and a quick duet of Wreck on the Highway (a reprise of our duet from McCabes 6/18/94, which made it onto the reissue of my album Awake), it suddenly looked like the perfect Springsteen six-song set.

Meanwhile, Robert asked us to play behind him as he read his poems Antique and The Want Bone, and we ran these improvisations a couple of times backstage. I don’t do solos (you may have noticed) but luckily I had Bruce around to do the frilly bits – a quicker 12 bar in G, and a slower one in E: it was mathematically interesting to get them to end simultaneously with Robert’s recitations. Bruce and Robert also spontaneously decided to recite the second half of Jersey Rain together, syllable for syllable:

“The Jersey rain, my rain, soaks all as one:

I feel it churning even in fair weather

To craze distinction, dry the same as wet.

In ripples of heat the August drought still feeds

Vapors in the sky that swell to smite the state —

The Jersey rain, my rain, in streams and beads

Of indissoluble grudge and aspiration:

I took this photo just then, and twittered it, with permission of course: http://twitpic.com/1lkvkh

By the time we were at the side of the stage, as David Daniel (head of WAMfest, and who first had the inspired idea of pairing these two “poet laureates”) did his introduction, it was like Bruce and Robert were old friends. And one of the chief joys was the growing realisation during the next two hours that this event, from the moment of its initial conception, was just meant to be: such are the correspondences between the two artists, their oeuvres, their backgrounds and their missions.

As ever, Bruce bowled me over with his enthusiasm and determination to do the best show possible, even leading an E Street Band-like “prayer huddle” before we went onstage. (“Can I get an Amen?”) And once we were on, it was plain sailing for a very exciting, very funny, never awkward and occasionally moving two hours. (Tears came to my eyes during The River, more or less the first Springsteen song I ever heard, when it suddenly hit me that one of my very greatest heroes was sitting a foot to my right singing the shit out of my favourite song. It was, in particular, the unearthly falsetto moan at the end, just after we’d been talking about Pavarotti. Then I decided that I should really pull myself together. I also got a tension headache from concentrating too hard on my guests’ answers – which, once I had diagnosed, I was able to rid myself of simply by relaxing my shoulders. It was all very smooth, including a little Q&A with the audience: “When have the two of you ever been starstruck? Pinsky: “I’m never starstruck.” Springsteen: “I once met a Beatle.”)

My first question was this:

“You were born in the same hospital, ten years apart. Here’s a quote: ‘I grew up in a small town, but the town, Long Branch, NJ, was also very near New York, and a lot of New York people came to the town on vacation. It was a resort, there was a boardwalk, there was a merry-go-round. All of that was beautiful.’ Which one of you said that?”

In fact, they weren’t quite certain who had said it, which was the point of the whole event in the first place. Many wonderful things were discussed, and I’m sure a transcript will emerge at some point.

This was an amazing culmination to the 2010 Words and Music Festival: great artists, poets, songwriters, doing what they do best. We should do the show again somewhere, and perhaps we will.

WAMfest will return in 2011. We may not be able to top yesterday. (My suggestion was Bob Dylan and T.S. Eliot.)” 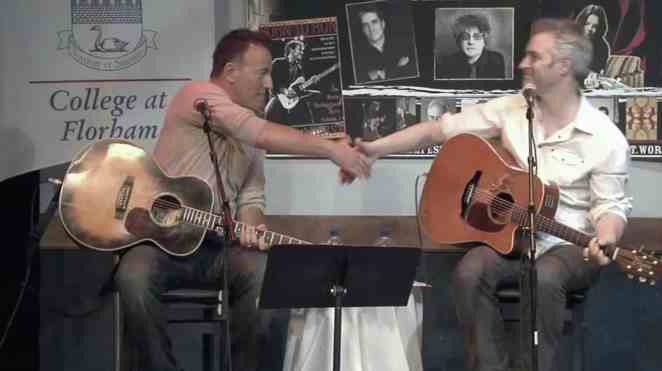 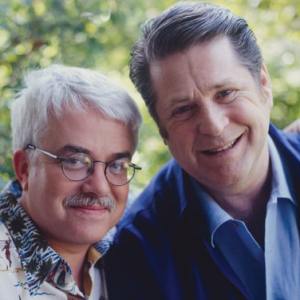 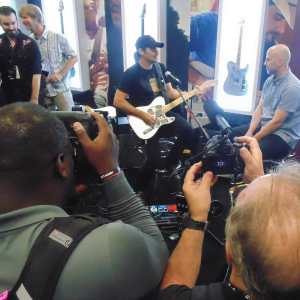