One of our favorite performances from the Grammys (and we’re still rewatching it) was when BTS took the stage to sing their second English single, “Butter.”

The entire boy band took the stage—Jungkook, V, Park Ji-min, Suga, Jin, RM, and J-Hope—with Jungkook recently recovered from COVID. The group paid homage to the James Bond film Mission: Impossible in their choreography and staging for the performance.

Kicking off their performance, Jungkook was lowered onto the stage while other members of the band were stationed at mission control of sorts. V was then seen chatting with Olivia Rodrigo before taking the stage to dodge laser beams with the band.

BTS’s “Butter” was nominated for the Best Pop Duo/Group Performance, but ultimately lost to “Kiss Me More” by Doja Cat and SZA.

After the announcement was made, the ARMY (BTS’ loyal fanbase), was bitter, to say the least. The viral hashtag #scammys was circulating on Twitter by BTS fans expressing their disappointment with The Recording Academy.

Despite the few upsets of the evening, BTS included, several artists maintained that a Grammy nomination still carries a lot of weight. “We love everyone who won tonight!! I don’t wanna see anyone talking any trash at ALL!! Nothing but love!! Talented musicians won tonight!! We were lucky to be nominated!! And lucky to perform!!” Finneas tweeted. 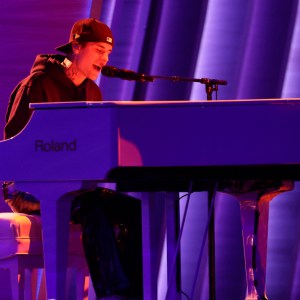