Four former members of Chicago’s cult “cardigan rock” outfit The Walters are now releasing music as Corduroy. Today they premiere a new single, “Squeezing Grapes,” via American Songwriter after teasing fresh tunes in an a cappella clip with John C. Reilly on their Instagram last week (“Keep washing your hands and stay safe out there. New music soon,” read the post, which showed the band harmonizing around a fedora-clad Reilly).

“Squeezing Grapes” opens with a sunny guitar riff before giving way to a gentle, bouncing melody. Michael (MJ) Tirabassi’s vocals are sweet and soft as he delivers a bummer of an opening line: “It’s not enough just to make things work.” Buoyed by groovy drums and bass, the track lulls along with a faint psychedelic bob. It’s a little funkier than any Walters fare, but it doesn’t stray too far from that band’s general mood–balmy and wistful and melancholic.

“There’s something about this place / that makes me want to get out today / but you’re so tired from squeezing grapes / I guess I can wait,” MJ sings in the chorus. The song closes with a breezy instrumental outro.

Asked about the track over email, Corduroy replied with four lines of verse that read like a viticulture-themed cover of “I’m A Little Teapot:” “I’m a little sweet grape, short and stout. / Here is my grape song, there’s no doubt. / When I get all squeezed up, hear me shout. / Please, squeeze me over till raisin comes out.” (It’s hard not to trace this tongue-in-cheek sensibility to The Walters’ Facebook page, which–to this day–lists the following “Award:” “2 consecutive years of being awarded biggest hunks medal of honor.”)

“Squeezing Grapes” is Corduroy’s second single, following their debut track “It Won’t Be Long,” released in December. They’ve confirmed they have an EP in the works, but they haven’t shared any details.

“We’ve been working on a bunch of new music the last two years,” Corduroy tells American Songwriter. “We’re in the process of whittling it down to 6 or 7 songs for an EP. As of now, ‘It Won’t Be Long’ and ‘Squeezing Grapes’ are both going to be on [it].”

Both tracks were written, recorded, and produced in a home studio where Corduroy craft all their songs from start to finish.

“We have our own ‘recording studio’ (bedroom) where we write, record, and produce all our music simultaneously,” explains the band. “For us, the writing and recording processes are very intertwined. Typically we start by recording a basic melody and chord progression and then develop the idea from there. It’s rare that we enter the recording process with a fleshed out song.”

Corduroy is rounded out by Walter Kosner, Danny Wells, and Charlie Ekhaus in addition to MJ. Absent from the group is former Walters frontman Luke Olson, who’s been churning out plenty of new tunes as L. Martin, including a full length album, Everything, with Kyle McEvoy.

“Squeezing Grapes” is out now. 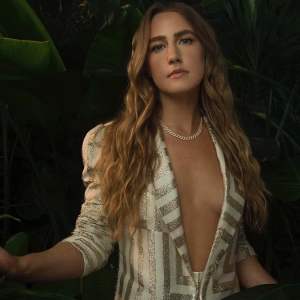