If this isn’t a sign of the times, it’s unclear what is.

Artist Tommy Kha had created an Elvis Presley-inspired self-portrait for the Memphis International Airport that was later removed by the Memphis-Shelby County Airport Authority because of backlash from Elvis fans.

Now, though, the piece is back up following backlash from social media.

Sources say the piece was installed in a newly reopened concourse in mid-February, but airport officials removed it this week due to an unspecified negative reaction from fans.

On Tuesday night (March 22), Fox 13 Memphis reported that the portrait was being reinstalled at the airport amid the backlash to the backlash.

Said Scott Brockman, President & CEO of the Memphis-Shelby County Airport Authority in a statement to Fox 13, “We apologize to Tommy for the effect that this ordeal has had on him.”

“Over the past 24 hours, we have heard from many in our community regarding the temporary removal of Tommy Kha’s artwork in the new concourse. The Airport Authority appreciates the support that the community has shown for Tommy and we have made the decision to reinstall the artwork. We apologize to Tommy for the effect that this ordeal has had on him. As stated yesterday, when the airport created its art program, our goal was to purchase and display artwork that did not include public figures or celebrities but made an exception in this case. The Airport Authority will continue to emphasize local artists, diversity, and inclusion with this art program, and we will explore additional best practices to address how we handle complaints and public feedback about our artwork.”

Kha had initially posted his reaction to the news in an Instagram post, writing: “After some disturbing complaints about my work, it was decided, and without my knowledge, the pictures were removed. I’m the only artist they have removed.”

The portrait portrays Kha, an Elvis fan and impersonator, in a jumpsuit recalling the Hawaiian-motif Presley often enjoyed. Kha and the Memphis Urban Art Commission, which helped get the work in the airport, to begin with, decried its removal.

A statement from the UAC said that Kha who grew up in Whitehaven Tennessee “has spent years doing documentary work about Elvis tribute artists/impersonators, and considers himself a part of that community.”

Brockman, who is the president and CEO of the Memphis-Shelby County Airport Authority, originally said that the MSCAA was “open to the possibility of commissioning new artwork” by Kha. “While we understand that the artist created the piece as a tribute to Elvis, the public reaction has been strong, leading us to revisit that original goal of avoiding the depiction of public figures in our art collection.”

Brockman added, “As a result, the airport determined it was best to temporarily remove the piece while we determine our best path forward.”

See more in this news broadcast from ABC24 in Memphis: 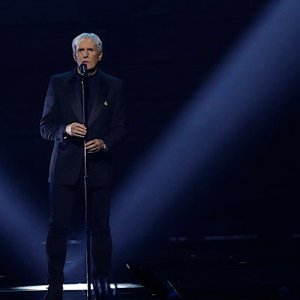