Kraftwerk’s Wolfgang Flür has linked up with U.K. soul and electronic duo Anushka for a new song, “4 AM,” which is out today (June 21).

According to a press statement on the new song, “’4 AM’ utilizes Wolfgang’s storytelling abilities to bring to life his own legendary experiences, in the form of an ode to the Berlin club scene and the freedom of (pre-Brexit) European touring.”

Said Anushka’s Max Wheeler of the collab in a press statement, “We spoke about exchanging some music and I sent some ideas for tracks based around journeys Victoria and I had done across Europe when gigging. When I first heard Pete’s electro drums and Wolfgang’s vocals talking about the Kraftwerk journeys on the Trans Europe Express… it blew my mind.”

Added Wheeler on Twitter on Tuesday morning, “Very proud moment. Here is a track we made with Wolfgang Flür of Kraftwerk. Big up @iwasarobot @AnushkaUK @peterduggal @Victoria_Port @tru_thoughts. Go check in all the usual spots please”

Complementing Flür’s recorded tales of tours gone by on the song, lyricist and vocalist Victoria Port brings the sensibilities of the track to the dance floor. Said Port of her participation in the song, “I was so excited to work with one of the pioneers of electronic music. It feels like a bit of a bucket list moment.”

This one-off special release follows Anushka’s recent album, Yemaya. The LP earned a great deal of recognition from a number of European outlets, including the BBC. 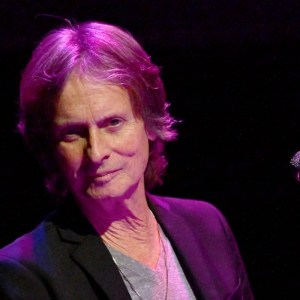