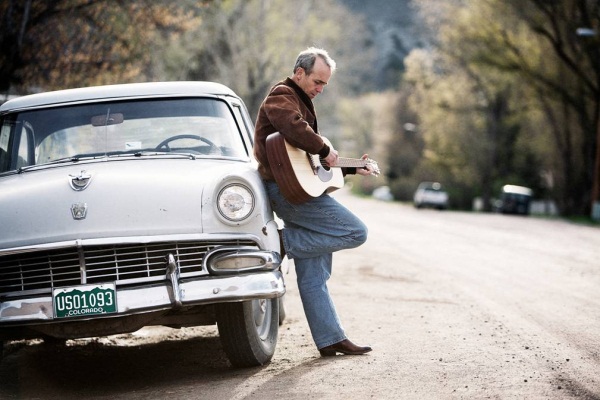 What is Café Los Reyes about?

I do a lot of bicycle racing which gives you these great endorphin rushes. I was thinking of a particular bike ride I did, and for some reason I just thought about Los Reyes, where I had eaten hot pork chili many times. Now that’s a real endorphin rush. I just sort of switched gears in the middle of the song and rewrote it. The image of the Mexican café – there’s a more accessible image there than in bicycle racing, more universally appealing.

You’re inspired by great songwriters, but you’re also inspired by poets like Edgar Allen Poe. How do songwriting and poetry fit together?

When I think of the kind of poetry that we generally read nowadays, from T.S. Eliot and roughly that time period on, it’s less lyrical, it’s less rhythmic. Modern poetry doesn’t follow the lyrical sort of pattern that would typically work well for pop melodies and pop chord progressions. But I do some things with old poetry. The old, more lyrical style of poetry, exemplified by Poe, provides a template for rhythm and meter for a songwriter. If you’ve studied that stuff, it’s all very structured, rhythmically and rhyme-wise. That kind of poetry, classical poetry, I think is a great way for a songwriter to familiarize himself with rhyme and rhythm and how they work together.

You’re a previous Grand Prize winner in our Lyric Contest. How did the trip to Nashville you won change the way you view your songwriting?

It made me a lot more serious about it, and made me focus more on it. I spent a lot more time on the music, but ironically, I spent a lot less time writing the music and more time playing the music, and performing and practicing. Before I won that first contest, I’d never picked up a guitar in my life, only piano. I strictly wrote songs, no performance of any kind, not even for myself to work through the songs.

After I won that guitar [a Martin DX1], I started playing the guitar and took lessons and became pretty passionate about the guitar. I’ve been playing my music around at open mics and cafes and a few bars and house parties around the area. I think I’ve become serious about trying to focus on commercial aspects of the craft and trying to make at least some of the songs have commercial appeal. I like to pursue my own sort of idiosyncratic impulses a lot of the time. Other times, I’ll think, “What will work for other people? What might appeal to people?” I didn’t write for anybody other than myself in the past.

You’ve since performed at open mics and house parties. How important is it for you to have that community around you, whether it’s your songwriting community or just friends and family?

It’s incredibly important to me to have my friends who are into music and my family, to have those people around to bounce ideas off of, share processes with, just to show up and listen to the music, or to have people to call me on the phone and ask to write a lyric for a tune that they’ve got. I’ve gotten to know a number of people that I co-write with, usually writing lyrics for their melodies or chord progressions. It’s really expanded my social sphere to get to know these people and to get involved with them. It’s helped a lot not only with my music and my writing, but it’s helped a lot with life in general, to expand my perspective and meet other people.

You didn’t concentrate on songwriting until later in life. What would you tell other people who find themselves drawn to songwriting later in their years?