If there’s any place in the world one could retain anonymity it would be New York City. Even in an age of constant social “tagging” and being outed on digital platform, NYC is an invisible cloak for any artist who desires a little mystery. Indie rock duo Newspoke, who are rumored former members of Mobb Depp and The Mighty Mighty Bosstones and go by the names M and R, have kept their identities a secret, letting their music speak for them and the listener gather their own visuals of the pair while connecting to their narratives.

On “Would Be Lady,” off the band’s new album Knocking on the Door of Daylight, the M and R reflect on a typical night out in NYC—the dichotomy of being in a packed bar and feeling completely lonely all at the same time.

“New York is packed to the brim with people, but it can be the loneliest place in the world at times,” says vocalist M. “The bar scene can be especially frustrating for any single person. What’s the right way to approach a person to whom you’re attracted? People say ‘act confident,’ so should I be cocky, arrogant, mysterious, playful? Do I smile a little less?  Do I make a joke?”

All the conflicting advice becomes overwhelming, says M, and ultimately leads to nowhere. “In this song, the advice is so overwhelming that I just sat at the back of the bar daydreaming and let this magical ‘what if’ life float on by,” adds M. I pulled my best moves out of a bag / Where I keep all the game that I never had / Fake a Copperfield, confidence is a fad / Pull a pigeon, rabbit out of a hat / But I can’t sprint while she runs 31 straight laps, he sings.

Walking through the city wearing different animated faces—everything from a Statue of Liberty head, top hat, lightbulb, vinyl record, trash can, Jennifer Lopez’s face, and other famed visages—the video is M and R’s ode to NYC.

“It’s been an insane few years, but as you can tell from the scenery, it’s as vibrant as ever,” says M. “We wanted to show a mixture of places, icons, and people that make up this nutty city. The sometimes controversial mix is what can make the city seem a little less lonely sometimes.”

Throughout the seven songs of Knocking on the Door of Daylight, the duo leaves hardships behind them from opening “Clean” and “Friend” through “End of the Show.”

M says, “In spite of the difficulties and frustrations of finding love in the big city, ‘Would Be Lady’ is an attempt to show a bit of humor, hope, and dreaming to help ease the loneliness. 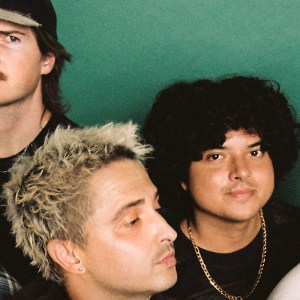