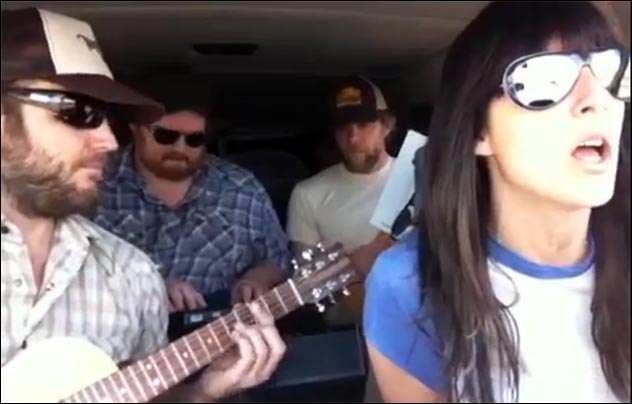 San Francisco musician Nicki Bluhm made a name for herself playing Van Sessions with her band The Gramblers. Between gigs, they’ll set up a video camera and perform one their favorite tunes as they go rolling down the road, with Nicki belting out the vocals from behind the wheel. Their take on Hall and Oates’ “I Can’t Go For That” earned them 1.5 million hits on YouTube.

Recently, Bluhm and the Gramblers recorded a Van Session exclusively for American Songwriter, a cover of The Band’s “Loving You Is Sweeter Than Ever” (watch it here).

We talked to Bluhm about her dream co-write (Dolly Parton), making music with her husband Tim, their excellent album Driftwood and more.

how did the Van Session cover series idea come up?

Our bass player, Steve Adams, always brings a ukulele out on the road. We were driving and he was playing “Tonight You Belong To Me” from the movie The Jerk. We had been working on that one for a while and finally got it dialed. Steve suggested we film and post a video of it for friends and family back home. We did and people really liked it . . . we really liked it. It became our way of entertaining ourselves on long drives while touring . . . things get a little dull in the van, especially with no radio.

is it challenging to pull off? does it get easier?

The beauty of the Van Sessions is we do it when we want and on our own time. We can take as long as we need to woodshed a song. The songs we choose can be challenging because we try to do the songs as close to the original versions as we can with the instruments we have in the van. It’s amazing how complex some of the pop songs we choose really are. We all enjoy the exercise of dissecting a song, getting inside of it and working out the details. Every time we do a Van Session, it is a new experience.

Do you have a favorite?

I really love the Patsy Cline cover “She’s Got You.” I adore Pasty and all of her songs. The lyrics are so moving and painful. She is one of the best at translating emotions in a song. My dad loves Patsy Cline too, that Van Session was dedicated to him.

Whether or not a song is good is up to each listener I think. I started writing in 2006 after I met Tim Bluhm [singer, songwriter, Mother Hips frontman and Nicki’s husband]. He encouraged me to start writing original material.

The first song I ever wrote was “Toby’s Song” which is the title track off my first album.
I was living in San Diego at the time and had just started my relationship with my now husband. I think Tim is one of the best songwriters of my time and I have a lot of respect for him. When I wrote “Toby’s Song,” I was traveling a lot and had to be away from my dog Toby. I remember getting home from a long trip and having him cuddle up with me on the bed, which he never really did (he was more of a floor dog). I thought about the interactions between us and the relationship humans have with dogs. I ended up writing my first song about a dog, yes. I guess it’s only appropriate as I usually enjoy the companionship of an animal over a human!

Tell us about how you write songs.

My favorite place to write is at home, usually when I am alone. I love sitting in the morning light with a cup of coffee and just seeing what comes to me. Those moments are getting fewer and farther between because I’ve been on the road so much this year. It’s harder for me to write on the road but I think the experiences I collect along my journeys will end up inspiring my songs. I am just beginning to understand what life on the road really is, all those songs written about the road resonate with me a lot more these days.

For the most part when I sit down to write a song I come up with a melody first. I usually just let words stream through me as I play the melody until I get a line that I like. Sometimes it comes fast and other times it takes a while. I respect and trust my stream of consciousness and like the idea of writing from the inside out.

I would say about half the songs I write I end up keeping. Sometimes I’ll start a song and record the idea and never go back to it. I know I have something good when Tim comes into the room after I’ve been working on something for a while and says, “That’s cool, what is that?” I love when that happens because it usually means I can get him to help me write a great bridge or come up with a clever line that ends up making the song that much more interesting.

There are four songwriters in the band: me, Tim Bluhm (keys, guitar and vox) Deren Ney (electric guitar) and Dave Mulligan (rhythm guitar and vox). We all contribute songs to the albums we make. I love having multiple songwriters because they all come from a difference source but tend to compliment each other so much. Dave, Deren and I have been very influenced by Tim and his songwriting. What drew me to Tim’s writing was his way of encapsulating a giant concept or emotion into just a few words. I think we all agree that writing about meaningful things in our lives is the stuff.

I’m inspired by so many things: longing for another time or place, feeling hurt, experiencing heartache, finding love. I like writing songs that people can find comfort in. As humans, we all go through love and love lost. I can remember back to certain times in my life when a song really got me through a difficult time because the song was proof that someone else had experienced the level of sorrow I was feeling at the time. It was relieving to know that I was not alone. I wrote a song called “Kill You to Call” that reflects that all too common story of confusions and heartache and finding the balance of mourning and moving on.

I’m on tour right now so I haven’t had a lot of time to write. We’re in the Rocky Mountains and the landscape here is so beautiful. It’s easy to get inspired. We always have instruments in the van so it’s easy enough to pick up a guitar and start strumming. We were driving from Salt Lake City, UT to McCall, ID the other day and I started a little song. It has no name yet, just a melody and a few lines. Hopefully I’ll remember it. It got the guys in the van humming along which is always a good sign.

What’s a song on Driftwood you’re particularly proud of and why?

What I admire most about good songwriters is their ability to say a thousand words in a simple phrase. I am constantly working on crafting songs that are simple but resonate. “Before You Loved Me” from my album Driftwood is one that I am proud of. It is one of those true story songs that felt really therapeutic to write. Writing often helps me cope with situations I don’t necessarily want to talk about but need some outlet for. That song is one of them and I feel grateful that writing can provide that release for me.

What’s a lyric from Driftwood you’re a fan of?

Tim wrote a song called “Wall of Early Morning Light” that is the last track on Driftwood. One of my favorite lines from that song is:

“In my soul I’ve been a miner and I’ve dug in the cold, cold earth. Never once did I look inside myself to see what my spirit was worth.”

It has always resonated with me. He has the ability to make a song feel like a period piece while being completely relevant in your own life and in present times.

Every song is different. I don’t think it gets easier or harder. Every song is a creation in its own right. I do think that songwriting is like a muscle; that the more you write, the better at songwriting you become. It doesn’t mean the songs will get better necessarily, but the muscle becomes stronger. I’m not the most disciplined songwriter though. I think if I tried to write one song a day or even one song a week (like some of my friends) it would do me a lot of good. Writing more in general is one of my ongoing goals.

My grandmother who is now 93 has kept a diary her entire life. She keeps encouraging me to keep a diary or journal. I have started so many journals in my life that are all half full. I am trying to be more committed to journaling but there are moments when I feel the memory would be more meaningful than the actual documentation. I do want to start documenting my life more. It’s a work in progress.

Co-writing with anyone is intimidating. I really prefer to write alone because I am pretty self-conscious about my songs, especially in the beginning. I would probably choose Dolly Parton because she seems so gentle, warm and kind. She also has an amazing ability to turn a phrase, set a mood and conjure up the most amazing imagery. I would also like to see how she plays that guitar with those fingernails! 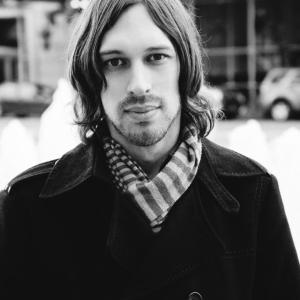