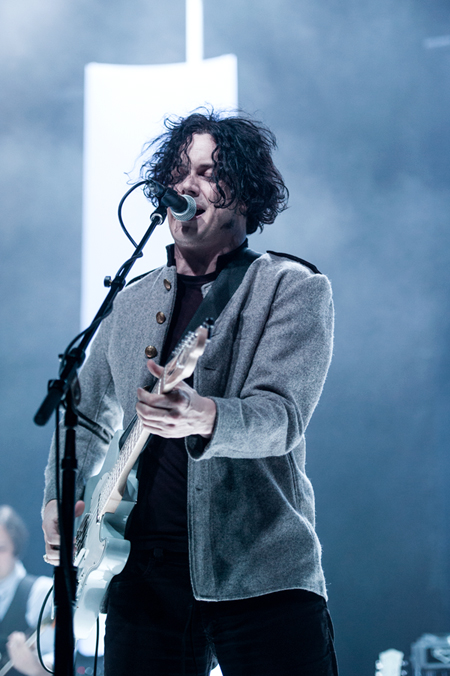 If you’ve ever been to a Number One party, you’d know that it’s a slightly awkward ritual practiced regularly in Nashville, where country stars celebrate their chart-topping songs with executives, other industry folk and a good lot of canapés. “This is my number one party,” Jack White told the audience last night at The Ryman, before launching into a thrashing version of “Trash Tongue Talker.” His album, Blunderbuss, has indeed hit number one and, on this first official night of tour, in the holiest of shrines to music that there ever was, in the city where he lives, loves and loves him back, he was going to celebrate with his boys. His boys, his kids, and around two-thousand of his fellow Nashvillians, stomping and singing along.

The night began with opening act Alabama Shakes, who began appropriately with the slowly-creeping bluesy number “Goin’ to the Party.” Lead singer Brittany Howard, clad in a floral dress and leggings, seemed married to the mic stand –in fact, for a good portion of their set, the entire band projected as stiff, maybe unsure of the proper way to act in the Mother Church. To probably everyone’s surprise they played their hit, “Hold On,” second and the similar reserved demeanor continued through “Hang Loose,” “I Found You,” “Rise to the Sun,” and “Boys & Girls,” which Howard began by telling everyone that she wrote this song because, as a kid, people had told her that she shouldn’t be friends with guys. She was smart not to listen and instead start a band with four of them.

Then, for “Be Mine,” Howard put down her guitar, removed the mic from the stand and started moving across the stage. Here’s where the mood changed. “If they want to fight,” she sang in her signature gospel-howl-growl, “they done started fucking with the wrong heart.” If there is any question to the correct disposition at the church of the Ryman, it’s this: pray your ass off to the lord of music by singing and playing with all you’ve got. For the next three songs, the Shakes did just that, in the way have many times in tiny clubs and bars on this short, steep road to success –which is with force and soul. After they finished with “You Ain’t Alone,” everyone wanted more. Heck, we wanted them to play “Hold On” again, but like that. Instead, they hustled offstage in the orange light.

Jack White, however, started making his mark before he even stepped onstage. A crew of four or so roadies began hustling about, setting up a white keyboard, removing baby blue sheets that had been draped over the instruments, turning a steel guitar. However, these were not just your ordinary roadies: they were White’s, which meant they wore suits, porkpie hats and ties. They moved elegantly and deliberately, like a performance in and of itself. No sloppy guys in dirty t-shirts, wandering about wondering where to put the artist’s beer. Not for White, whose attention to detail trickles down to every last knob, every pick guard. And as he walked on stage to the blazing crystal-blue light with his male band, Los Buzzardos, launching in to the White Stripes classic “Dead Leaves and the Dirty Ground” as the audience (which included Wynonna Judd) took to its feet and stayed there, one thing was clear: the thing he’ll never make too perfect, too polished, too predictable, is his music. This is rock and roll, after all, and he was born to be its preacher.

As the first show of a two-night sold out run, White bought out his boys (presumably he’ll play tonight with his female band, The Peacocks). While each musician was stellar, it was impossible not keep staring at Brooklynite Daru Jones, who pounded his drumset with force, skill and downright style, transforming the Stripes tunes into the booming, dynamic anthems that they always deserved to be.

For the first half of the nearly two-hour show, White would pick and choose from the Stripes, The Dead Weather, The Raconteurs and his solo songs, playing his guitar like it was a wild animal that only he could tame. “It’s good to see you,” White said as the crowd screamed, after playing “Missing Pieces,” “Sixteen Saltines” and “Weep Themselves to Sleep” from Blunderbuss, “and it’s good to be home, too.” Next came “Hotel Yorba,” which White beckoned the audience to sing along to, then “Top Yourself,” “Hypocritical Kiss,” “Black Math” and “Trash Tongue Talker” before he addressed the audience again.

“I don’t know you personally,” he said, “but I don’t think it would be too much of a problem if I played a Hank Williams song.” It sure wasn’t – the audience roared in the place where the walls are papered with Hatch Show prints of the country legend –and he played “You Know That I Know” with the treatment he’s given to William’s contemporaries like Wanda Jackson and Loretta Lynn. Nashville weeps a little every day over the early passing of Hank Sr., and they shed a few more tears over the fact that White never got to produce once of his records. It sure would have been groovy.

After “We’re Going to be Friends,” and before ending the first set with another Stripes song, “Ball and Biscuit,” the band launched into “I Cut Like a Buffalo,” a Dead Weather tune off 2009’s Horehound. On the record, the song brings a nearly dubstep vibe to its grinding blues beat and organ chimes. Live, it absolutely wailed. For all his guitar prowess, White’s tasteful: not every song is accompanied by a show-off-solo, so when he rips, you listen. And on these last two, he did. It shook and rattled the Ryman with such force, such Rockstar quality with a capital R, that even the old mandolins stashed away in display cases in the back of the theater wanted in.

The band took a brief break before returning for their second set –technically an encore, maybe, but still ten songs long. White had removed the grey military jacket he’d started the show in, and returned in a black t-shirt. Playing “My Doorbell,” he looked again like the Jack White we’d gotten to know years ago when he released this song with Meg. Except he didn’t sound like it. White’s matured and evolved so much over the years, but subtly so, finding his indelible sound, pairing himself with players that can bring due justice to his tunes and burning his place into musical legendry.

A few more tracks (including “Blunderbuss,” the Raconteurs’ “Steady, As She Goes” and the Howlin’ Wolf cover “300 Pounds of Joy”) the curtain close was drawing near. He commented on how when it’s nice out you can see just how beautiful Tennessee is (Jack White: he’s just like us, making small talk about the weather), playing an emotional version of “Take Me With You When You Go” then “Carolina Drama,” before ending the night with Leadbelly’s “Goodnight, Irene.” He sang to the audience, and they sang right back at him. “Maybe I’ll see some of you back here tomorrow,” he said before walking offstage through the same corner where you could see distant flashes of two small, curly-haired kids, maybe his own. When he goes home, he’s dad. But that night, he had over two-thousand more children, following his every move with admiring eyes and obedient tongues, getting a first class lesson in one of the most important schools: rock n’roll. 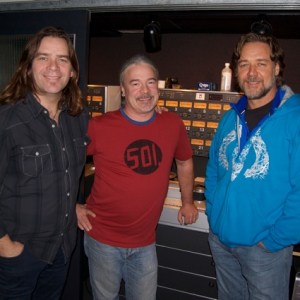