With nine nominations and three wins, Olivia Rodrigo scored at her first-ever iHeartRadio Music award. Her journey over the past year has led to an abundance of awards, and being recognized by iHeartRadio is the latest goal to check off her musical bucket list.

Few artists have matched Rodrigo’s incredible trajectory with her debut album Sour. In less than a year, she went from writing songs for High School Musical: The Musical: The Series to going triple platinum with her hit single “drivers license.”

At the iHeartRadio Music Awards Tuesday night (March 22), Rodrigo took home TikTok Bop of the Year for “good 4 u,” Best New Pop Artist, and most notably, Female Artist of the Year. The star-studded list of nominees also included Ariana Grande, Doja Cat, Dua Lipa, and Rodrigo’s personal idol, Taylor Swift. It is an accomplishment in itself to be nominated alongside so many iconic musicians at just 19 years old.

Better yet, Rodrigo was introduced by another artist known for songs about angsty teenage love affairs: Avril Lavigne. Rodrigo thanked Lavigne personally in her acceptance speech.

“First of all, thank you, Avril. I’m obsessed with you. You’re amazing. Thank you for being here.”

She went on to thank her fans profusely for continuously supporting her music and giving her “the most incredible year of [her] whole life.”

“I wake up every day and I can’t believe I get to do this for my job, and it’s all because of you guys. So thank you so much,” Rodrigo said.

Rodrigo also thanked her fellow female artists and nominees for the award, saying, “Thank you to all the other incredible women here tonight. You are so amazing and I’m in awe of your talent. It’s an honor to be here with you guys. Thank you so much!”

The iHeartRadio Music Awards were just the beginning of an exciting week for Rodrigo. On Friday, March 25, her documentary driving home to u: a SOUR film will be released on Disney+. The film will give fans the opportunity to see the process of creating SOUR and go behind the scenes of Rodrigo’s musical journey.

Check out the trailer for the film below, and see Rodrigo’s tour dates HERE. 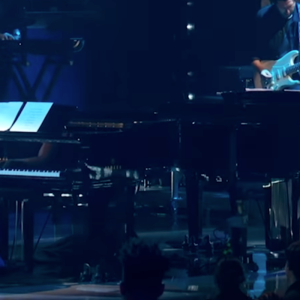