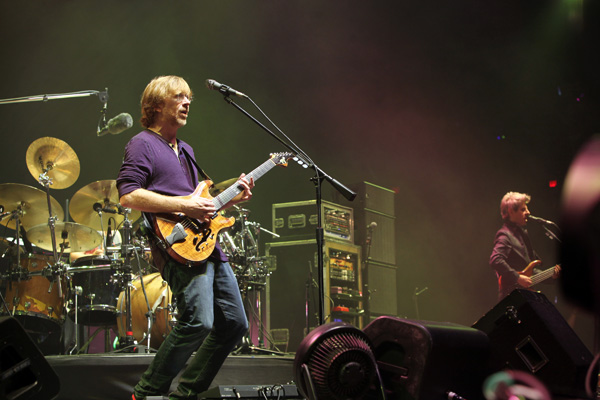 On Halloween night, Phish kicked off a 3-night run of sold out shows at Boardwalk Hall in Atlantic City, New Jersey. The sixth of such concerts since 1994, the Halloween gig has become a tradition for Phish and their cult following.  Constant components of these shows include encouraging their fans to come in costume (and, if they so choose, to participate in a fan-wide costume contest) and handing out Phishbills, which explains the band’s musical selection of the night.  For Phish’s three set-long Halloween shows, the band has traditionally donned a so called “musical costume” for the middle set, performing an entire album that they cite as an influence.  Past musical costumes have included covers of The Beatles’ White Album, Talking Heads’ Remain in Light, and most recently in 2010, Little Feat’s Waiting for Columbus.  Phish fans eagerly anticipate the mystery of the band’s Halloween show.  This year, the band tried something entirely different, playing welve songs off of an as-yet-unrecorded album tentatively titled Wingsuit.

According to the Phishbill, the band met at The Barn, their practice space in Vermont, last October.  This meeting was not intended for album creation: “We walked into The Barn the first day with literally nothing,” says the band through the Phishbill, “just excitement to have the opportunity to spend some rare unschedule time hanging out together with no agenda.” The band still enjoy playing music together, and this is obvious to anyone who has attended a Phish concert.  They effortlessly slide into long jams, looking at one another with smiles and nods and expression of sheer happiness at sharing this joy with their audience.  That their rendez-vous at The Barn would result in the twelve songs played on Halloween was no easy task.  The band went through Gordon’s jam journal to reevaluate their chemistry and decide if they could use any of these jams in new music.  The songs were a team effort, as Phish worked with one another on many of the songs’ compositions for the first time since the mid-1990s.  With their songs rehearsed and ready to record (recording will begin three days after the Atlantic City run ends), the band had one thing left that they felt they needed to do:  play it for their fans.

By playing the band’s new album, Phish not only broke their own mould, but also tested themselves.  It takes a lot of guts to go up on a stage in front of some of your most adoring fans and transform the way they’ve heard another artist’s music.  It takes even more to defy what they expect and play completely new, never-before-heard music.  Phish bared all on Thursday night and knew what they were potentially getting themselves into.  “People often react a little strongly and crazily when they hear us play something new,” Anastasio wrote. “Every time we’ve put out a new Phish album… a certain contingent of fans has felt that the band they know and love is coming to an end.  It’s never true.”

Wingsuit, like Phish’s previous works, runs the gamut of music from bluegrass to soul to reggae to rock.  The album was not only a musical pleasure, but a visual one as well, as the band repositioned themselves into different positions around the stage.  “Monica”, for example, was performed in a tight quartet center-stage that included Fishman on scaled-down drumset and Gordon on an upright bass.  “Amidst the Peals of Laughter” consisted of just Anastasio and McConnell on stage together singing a Jack and Jill-themed chorus.  “Snow”, a quiet, harmony-filled ballad, had the band at stage-left performing acoustically.  One of the highlights of the Wingsuit set was the funky, Fishman rap-driven “Wombat”, which, like Phish’s “Meatstick”, came complete with a choreographed dance, but this one was not by Anastasio and Gordon.  The choreographed moves were done by a lead dancer in a wombat costume and backup dancers performing a boy band-style pop number.  When the song was over, Anastasio brought the wombat back out for a round of applause, and revealed him to be Detective Fish himself, 92-year-old actor Abe Vigoda, who was referenced in the lyrics of the number.  After the set concluded with the band’s heartfelt appreciation to the audience for their support, a brief video played that spoofed The Godfather featuring Abe Vigoda and Mike Gordon as the Godfather, Don Gordoleone.  The video was a reminder that Phish is still the same witty, talented artists that they were before the debut of Wingsuit, and it left the audience wanting more.

Phish’s first set kicked off with a peppy version of “Heavy Things”, followed later by an original  bluegrass song, “Poor Heart.” The set closed with a smooth rendition of “Bathtub Gin,”  which included the band vocalizing along with their respective instrumental parts.  The Wingsuit set freed the band of the stress of revealing the new album, and it was felt through their breezy, fluid jams in the third set.  This final set was six songs long but spanned over an hour.  It included fan favorites and extended versions of “Ghost” and and a nearly 20 minute-long “Carini,” an improvisational highlight. Phish, who usually performs multiple covers per show encored with their only cover of the evening, an upbeat version Bob Dylan’s “Quinn the Eskimo.” Not only was the band free from pressure about the new songs, but also were the audience members, who had held their breath at the anticipation of new Phish music and were reminded by the third set that their favorite band was still the same jam-driven, fun foursome.

On a normal Phish night, one genuinely feels like they have just been a part of something big.  This Halloween show was dramatically different in that the audience  acted as guinea pigs–they were asked to consume the band’s new, raw, clean material  and be a part of an experiment that was, up until distribution of the Phishbill, a complete mystery to them.  Regardless of whatever music they play, Phish doesn’t disappoint.  The love of the music and their fans are consistent throughout whatever they play, be it the traditional or the unexpected.  This Halloween, Phish showed with their Wingsuit set that their new music is definitely not an end but a beginning of a new era of tradition for them. 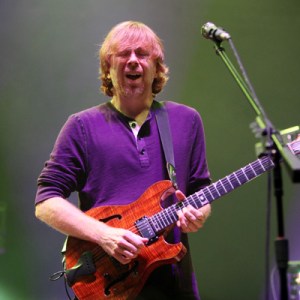 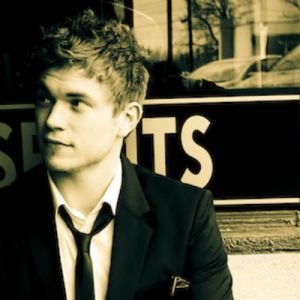