Well, this is absolutely precious.

Sara Evans is back out on the road touring and, this time, she’s brought a very special family member along with her.

RELATED: Sara Evans’ new duet with her children on a Fleetwood Mac classic is pure gold

If the handsome young guitar player in her band looks familiar, it’s because he’s got some good genes—it’s Sara’s son, Avery, the oldest of her three children.

Eighteen year-old Avery can play that guitar and was a wonderful addition to Sara’s kickoff of the “CMT Next Women of Country: All The Love Tour,” which also features RaeLynn and Kalie Shorr. They took the BB King Blues Club in New York City by storm.

Sara’s husband, Jay Barker, was there to support his wife and stepson, and couldn’t help but brag about Avery in a Twitter post.

Amazing show tonight! I cannot believe our son Avery Barker is on tour now. So proud of him. He is gonna be HUGE! Just wait and see! Love them and so proud. Amazing Night! pic.twitter.com/amqFZNyyIE

“Amazing show tonight,” Jay wrote. “I cannot believe our son Avery Barker is on tour now. So proud of him. He is gonna be HUGE! Just wait and see. Love them and so proud.”

You know Mom loves having him out on the road! Sara told “People” in an interview last fall that she would be thrilled if her kids followed in her musical footsteps.

“I think it would make me nervous is they didn’t want to do something weird with their lives,” she said. “If they just wanted to be normal I would be like, ‘What? I’m not gonna be able to relate to you!’”

Besides, they already know all about life on the tour bus.

“They’re addicted to road life. They all grew up on the bus—they learned to walk and talk and potty train—[so] they’re of that same mindset, and, again, they all love music so much, so I just can’t imagine they wouldn’t pursue it will all their heart,” she told “People.”

But don’t think for one second that having a famous mom is going to make anything easier. Sara says it’s important for her kids to learn the value of hard work and making things happen on your own.

“It’s something that you have to teach your children from an early age: to work hard for what they want,” she told “People.”

“Nobody just deserves anything. Nobody’s just entitled to anything. You have to go out and get it.”

It looks like Avery is doing just that, and his sisters are already following in his footsteps. As we reported  last summer, Sara’s daughter Olivia has done the encore during some of her mothers shows, performed with her mom on “Live With Kelly & Ryan” last summer and also provided background vocals on Sara’s single, “Marquee Sign.”

RELATED: Adam Levine’s comments to Sara Evans in a 2008 interview will blow your mind 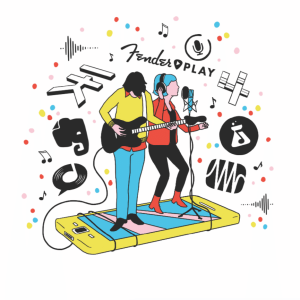