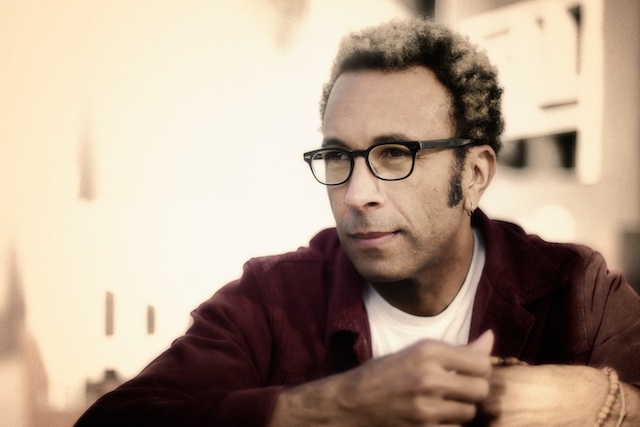 Shawn Amos belongs to a select group of black musicians whose work doesn’t fit neatly into the “urban” market and who grew up listening to various genres, notably rock. Jimi Hendrix being the most obvious exception, most black artists who rock – Garland Jeffreys, Jean Beauvoir and Vinnie James to name a few – are doomed to cult hero status at best. Too “white” for black radio and too “black” for white, they often find themselves in a musical no man’s land. This is a shame, but it says more about the way the music industry loves to categorize people than it does about the quality of these artists’ work.

Amos grew up mainly in Southern California and had a childhood that simultaneously idyllic and tragic. The only son of Wally “Famous” Amos (yes, the cookie maker) and singer Shirlee Ellis, he spent his formative years in a mostly white community and got to experience many aspects of the music business first-hand, at a time when there was a lot of great music out there. In addition to his mother being a singer, Wally Amos was a talent agent before he became “Famous.” But Shawn’s parents had a less-than-rosy marriage, to say the least, and Shirlee suffered from schizoaffective disorder. She committed suicide in 2003 – an event which inspired Amos to record the album Thank You, Shirlee May two years later.

Since then – and even before that – Shawn Amos has worn many hats. In addition to being a singer-songwriter, he’s been a humanitarian, a businessman, an A&R executive (he oversaw Rhino Records’ Rhapsodies in Black: Music and Words from Harlem Renaissance among other projects), a family man and a blogger. Readers are advised to check out his “Cookies & Milk” series for The Huffington Post, which offers a series of eloquent reminiscences about his childhood.

Amos returned to being a singer-songwriter last month with the release of his third album, Harlem. The album was in fact originally recorded years ago but never had a proper release and wound up gathering dust until one of his children happened upon it in 2010. Lyrically, Harlem is another autobiographical disc, dealing with specific aspects of the Amos’ life but also with larger issues of identity, family and racial uncertainty. Musically, it draws mainly from the folkier side of rock as well as from soul, reflecting the singer’s own disparate musical influences. In addition to top-notch originals like “Independence Day” and “Blackface,” the disc features a cover of Neil Young’s classic “Southern Man” – but slowed down and augmented by the sounds of a chain gang. Interestingly, one of the guests on this version of “Southern Man” is none other than Crazy Horse guitarist Frank “Poncho” Sampedro.

I recently had a chance to talk with Shawn Amos during a brief trip he made to Manhattan. Below are excerpts from what was an extremely open and interesting conversation.

Tell me about the about the album Harlem. You originally released it about 10 years ago, right?

I recorded it 10 years ago [but] I can’t even say I formally released it. We pressed a few copies. It was recorded in ’99 or 2000 and that was right before an artist was able to self-release with any sense of impact. iTunes wasn’t up yet, Amazon was beginning to take consignment stuff from indie artists. The whole infrastructure that exists now digitally wasn’t quite in place at the time I did Harlem. So I didn’t really have the meant to get it out there.

And I was insecure about it, frankly. The album was sort of a funky fit back then. I was like this black dude singing about the Harlem Renaissance with banjos. A lot of friends of mine who were in the business were sort of scratching their heads about it. That kind of freaked me out a bit. I didn’t wanna sort of set myself up to be shot down. So I made some copies for some friends and that was sort of it. I moved onto other projects.

It wasn’t until a year ago where my daughter found this record. I gave her a copy of it. She’d come home from school and she started walking around the house singing some of these songs and it was a trip! I listened to the record again for the first time in years and it made a lot more sense now than it did then. Things [have] shifted a bit – you’ve got Ben Harper, Carolina Chocolate Drops. It just seemed like it wasn’t so weird-sounding now.

You cover “Southern Man” [on Harlem]. Was Neil Young an influence growing up?

Huge. I always loved both sides of him. The sort of acoustic, vulnerable side and the Crazy Horse stuff. I always loved “Southern Man.” And I always felt like the darkness of the lyrics… got overshadowed a bit by the rock and roll, riffy nature of it. When people talk about that song, they [usually] imitate the guitar lick. But in my experience, not a lot of people either knew what the song was about or got into the lyric. So I wanted to do a version that put all the emphasis on the lyric. I stripped the hook out of it, stripped the macho thing out of it and… then we put this Alan Lomax chain gang in it. Putting that on top of it – the chain gang sort of replaced the guitar. Not in a tempo sense, just as a new kind of hook. To me, now the song is firmly in the black American South – it’s set in the same world that the rest of the record is set in. The combination of sexual tension and anger comes to the surface.

Who are some of the other people that influenced you musically when you were growing up?

The people who influenced me are sort of a result of that musical schizophrenia that my column represents. One one hand, I really got into classic singer-songwriters like Paul Simon, Rickie Lee Jones, Bob Dylan of course. I really got into lyrics and really saw these songs as short stories and poems.

On the other hand was this aggressive rock that sort of spoke to my being pissed off as a kid. So I was really into The Who. I loved Pete Townshend and still he’s the one idol I kind of hold up there. And that led to punk bands. [But] it stopped short of Led Zeppelin or all out, machismo cock-rock. I didn’t go that far.

And the [third] leg of the stool was black music. You know, Marvin Gaye and Motown stuff and James Brown. That was sort of the only window I had into black culture. I didn’t even associate it as being part of me because at the time, I considered myself more white than anything else. I lived in white neighborhoods, I went to white private schools. I didn’t know a black kid until I was in ninth grade! So for me, that black music was as mystical and other-worldly as it was for a white kid listening to it. And that soul stuff led me back to blues. I started getting into old Howlin’ Wolf and Muddy Waters and Junior Wells. I started making this whole sort of pilgrimage into black music. But meanwhile, I was going to see X and Black Flag and checking out Rickie Lee Jones (laughs). It was a schizophrenic kind of thing. But those are the three camps of music I listened to: classic singer-songwriter stuff with a bit of loud guitar and a whole lotta soul.

Before your Dad became Famous Amos, he was in show business himself. In your blog you say, “L.A. allows you to reinvent yourself.”

He was a big pop culture personality in the ’70s, for sure. And that was a major reinvention for him. Before that he was an agent with William Morris – the first black agent in the business. He booked Simon & Garfunkel and The Animals and Solomon Burke. And from there he went to being a personal manager of actors and musicians. And basically failed! He needed to figure out what to do [next and] he stumbled upon this cookie thing and did it as a hobby and passed ‘em around at client meetings and things like that. So he became known for his cookies and decided – I think [it was] part inspiration, part desperation, part dare – to start this cookie company. And it worked! But it was a chance for him to reinvent himself and escape his past to a degree.

And he and your Mom divorced?

Yeah. I mean, in some ways they were never really together. But they officially divorced when I was seven… She was severely mentally ill and he was severely unfaithful. And the combination of the two didn’t make for a good marriage. I have a few pictures and even fewer memories of us as a family. That was never much on the table.

I admire the fact that you’ve been able to create your own family… It’s really not easy to do, but you’ve done it. And to have done it coming from that background is pretty amazing.

Thanks. I fought for it. I took it right up to the edge of self-destruction a couple of times. It took me awhile to find my wife. And then once I found her, I did everything I could do at first to blow it up. That’s what I knew. I think it was the combination of us being inextricably emotionally tied to one another and her being incredibly strong that helped us to get past my bad behavior. She somehow had the patience and the faith and the foresight to realize that there was a better person than the one that was displaying himself on the surface. And along the way, I realized that I didn’t have to live my parents’ life; I could live my own life. I was recreating my parents’ existence for a long time.

The Thank You Shirlee May record was the first step for me of learning how to make sense of where I came from and beginning to divorce myself from it.

2005. It was a concept record. My mother was a nightclub singer and she performed under the name Shirlee May. She had a recording deal with Mercury Records and she was a rising star. And she met my father when he was an agent with William Morris. I think the combination of him perhaps encouraging her not to pursue that path because he wanted her as a wife, and her mental illness set in. My mother suffered from schizo-affective disorder, which is a pretty severe psychosis. So things sort of derailed her career. By the time I was born… she was very much a broken woman. That’s all I ever knew her as. She committed suicide in 2003. And when she died, I discovered her Shirlee May life, which I [hadn’t] known anything about. I discovered acetates of demos she did and press clippings and all this evidence of the life she’d had as this woman who was healthy and beautiful and strong – everything I never knew. It sort of became part of my grieving and rebuilding process. So I made a record around that. The record was my imaginings of what her life must have been like in the ‘60s. It was very therapeutic for me.