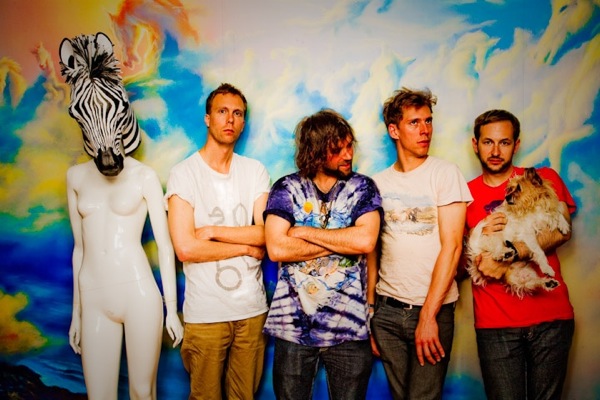 It’s the last night of Suckers’ fall tour leg with Menomena. The Brooklyn band played Atlanta the night before, then stopped for lunch in Chattanooga on the way to Nashville. They seem weary as they load-in at the Mercy Lounge for the show.

But a few hours later on stage, Quinn Walker, one of the band’s two lead singers, is almost unrecognizable from the person who arrived in the van. He’s ebullient, joyous and emotionally bare. Two fans are dancing in the front row and Walker points them out, saying, “You guys are the best. This is the most fun I’ve had the whole time.” When he says it, you have to believe him. When Suckers are at their best, it’s when Walker’s dark heart is front and center.

Suckers formed a few years back, but didn’t really start taking the band seriously until they released an EP in 2009, which was co-produced by Yeasayer’s Anand Wilder. The song “It Gets Your Body Movin'” made its way around the blogs and was a summer hit, so the New York label Frenchkiss signed the band, and released their debut full-length, Wild Smile, this past June. “It Gets Your Body Movin’” still seems like one of their strongest songs, even though Wild Smile moves their sound forward in a number of ways.

Suckers’ sound is a layered, multi-harmonized organism, mixing drummer Brian Aiken’s tribal rhythms, the twin guitars of Austin Fisher and Walker, and bassist Pan’s drum pads-and-bass interplay. They begin composing songs in their rehearsal space in Brooklyn, and rarely do members write outside of this setting, although Fisher concedes that “Roman Candles” and Walker’s “Save Your Love For Me” were written alone.

“We write songs that we can perform live,” says Pan of the band’s organic songwriting process, adding that usually whoever starts singing first helps shape the particular song’s lyrics and melody.

“Black Sheep” is a good example. Fisher originally wrote the song, but upon bringing it to the band, it morphed into the freak-out showcased on Wild Smile. “We wanted a dance-y, up tempo thing,” says drummer Brian Aiken. Walker agreed that the band needed something more up beat and added a schizophrenic guitar intro that turns into fuzzy glam riffs later in the song. Then, about a minute-and-a-half in, something happens. Walker takes over the mic and a barrage of whiny and hoarse vocals topple over the rest of the band before Aiken’s more cool-headed vocals come back in. For the remaining two minutes, the band gives the song a workout. It’s as if there are really four or five songs packed into one, which makes “Black Sheep” an especially fun spectacle to witness in concert.

The band’s show feels loose, though Fisher says the arrangements are pretty set with not a lot of room for improvisation. For the last song, “It Gets Your Body Movin’,” members of openers Tu Fawning and headliners Menomena join them onstage. While the other bands will continue together on tour, Suckers will head to Europe for two weeks with Yeasayer, to play bigger rooms. This last night in Nashville, after a month on the road with friends, there’s an emotional weight on the stage that makes it seems different from just another night. 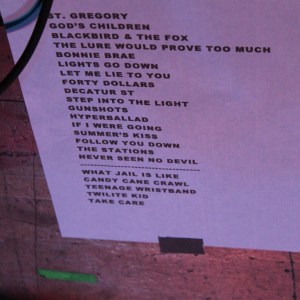