Tracy Lawrence and Clay Walker were two of the biggest country stars of the ’90s and they are also good buddies. However, their friendship started out a little rough after the two were on the road together.

On CMT’s Probably Shouldn’t Tell You This, a show that has country stars telling stories of their wild nights and the fun they had on the road, Lawrence and Walker sat down to talk about the first time they toured together. You see, Lawrence was heading out on the road and Walker had just been starting out. So Lawrence took Walker out with him for his first tour. But we’ll let them tell the story:

“I’d never been on the road and Tracy was crazy,” Walker says. “He claims he’s not now, but anyway.”

“I think we were in like Iowa or one of those states where they grow lots and lots of corn,” Lawrence says. “We decided we were gonna find a way to have some fun.”

“We were driving and we were having some cocktails and doing some shots and just having a good time,” says Walker. “They told me, you know, you have a bunk back here. By the way, don’t think that busses are all glorified. Bunks look like coffins if you’ve ever been in one, by the way. And so I go back and get in the bunk and go to sleep.”

“The whole idea of this was we were going to drive out down this long gravel road,” explains Lawrence of their plan to have fun. “There was a huge cornfield out there. Everybody was in teams of two and we had a garbage bag and we had a flashlight. So the object was the bus driver was going to turn down that gravel road, we were going to jump out in teams, we were gonna run out the cornfield, grab as much corn as we could before the bus driver could go down to the end and turn around and come back. And then we were gonna see how much corn each one of us got. That was our context.”

“The bus stops, I don’t know why it stops,” recalls Clay.

“I remember we got back on the bus and we had bags of corn everywhere,” Lawrence says.

“He and some of the band guys come back there and open the bunk curtain,” Walker shares.

“I remember jerking the curtain back on the bunk and saying, ‘Man, you want some corn?’ remembers Lawrence.

“And I went, ‘I am getting the f off this bus at the next stop. I don’t care if I’ve got to hitch a ride out of here,'” exclaims Walker.

“I think he looked like an owl that had been woken up in the middle of the night. His eyes were about that big,” Lawrence says showing the bigness with his hands.

“Seriously the corn was almost two feet and it was from the front all the way to the back,” Walker says. “The whole back of the bus was full up to corn to the waist.”

“And we stopped at a donut shop that morning and my tour manager went in and talked them out of a block of butter, and we cooked that corn in the microwave,” Lawrences busts out laughing. “It was awesome.”

“It was insane,” Walker adds.

“I think Clay left that experience absolutely terrified of me,” Lawrencs says.

“It took me a couple of years, you know, and then we finally started hanging out again and it’s kind of like that hair of the dog, you went back for one more dose and I keep doing that with him,’ concludes Walker.

As the two closed out the segment, Walker reveals that the friends are talking about a tour together next year (2022). But one thing is clear, Walker will definitely take his own bus this time around.

Check out Lawrence and Walker on Probably Shouldn’t Tell You This below: 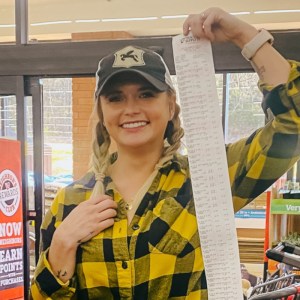