On April 9 the livestream pledging summit Stand Up for Ukraine raised $10.1 billion in grants and loans to support those impacted by the war in Ukraine with the help of special videos and performances by U2, Kacey Musgraves, Bruce Springsteen, Carole King, and more.

“I’m inviting everybody: musicians, actors, athletes, businessmen, politicians, everybody, ” said Zelensky. “Everyone who wants to join this movement and ‘Stand Up for Ukraine.’”

iHeartRadio shared the calls to action and public service announcements and showcased artists who individually posted special performances or recorded calls to action on their social media channels in support of the event, including U2, Bruce Springsteen, Carole King, Kacey Musgraves, and Elton John.

“Millions of Ukrainian families have been displaced from their country and are currently living in the cold without food and shelter. They need our help now,” said John Sykes, president of entertainment enterprises for iHeartMedia, in a statement. “iHeart is asking all of our listeners, employees, and personalities to join some of the world’s biggest musicians and entertainers to use their voices to advocate for the people of Ukraine and call on world leaders to mobilize urgent refugee relief and humanitarian aid as soon as possible.”

In his recorded video, Elton John said, “We are devastated to see the suffering of people in Ukraine as this conflict unfolds. Two decades ago, we pledged to raise awareness and provide support for people living with HIV in Ukraine through [the Elton John AIDS Foundation]. They, and so many more, need our help now more than ever.”

U2’s Bono and the Edge performed an acoustic version of their 2000 hit “Walk On” with updated lyrics inspired by the people of Ukrainian. In an accompanying statement, the band wrote, “The brave people of Ukraine are fighting for their freedom—and for ours—in the face of unspeakable violence and an unjust invasion. More than four million people, mostly women, and children, have had to flee for their lives—a population nearly the size of Ireland.”

Springsteen shared his video message on Instagram with the hashtag #StandUpForUkraine. “Refugees in Ukraine and around the world need our help now,” said Springsteen. “Join all of us on E Street, and Global Citizen, as we stand up for Ukraine and stand up for those displaced globally because everyone deserves safe and humane living conditions.”

Other artists who offered their words and performances included Annie Lennox singing “Here Comes the Rain Again,” Jon Bon Jovi who also performed “We Don’t Run” with additional messages from Sharon and Ozzy Osbourne, Kacey Musgraves, and The Jonas Brothers.

Madonna and her son David Banda also sang a heartfelt version of Elton John’s 1971 hit “Your Song” together on the piano. 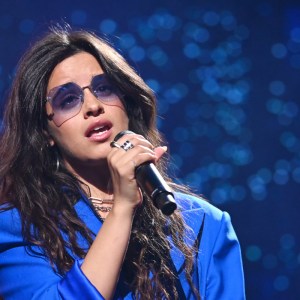 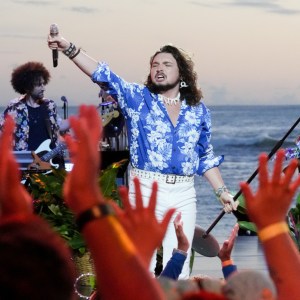