In discussing the nature of truth, Pete Seeger shared a simile he learned from his father. “The truth,” he said, “is a rabbit in a bramble patch. And you can’t lay your hand on it. All you do is circle around and point, and say, ‘It’s in there somewhere.’”

It’s a quote that applies to learning how to write songs. It’s true that there is no one single truth about songwriting you can learn. Nor is there any repeatable method than can be taught, because none exists. But there is a whole lot of wisdom about songwriting, and in that aggregate of ideas (which concur and also conflict), there is a greater truth to discover. There’s much here to light creative fires and set song sparks sparking. And there is the comfort of knowing that although this is solitary and often
arduous work, you’re not alone.

As Rickie Lee Jones says here, you’re creating little universes when writing songs. It is work, she says, that is more important even than you might know.

Here’s your invitation to our bramble patch. That elusive rabbit of songwriting understanding is waiting. You can’t lay your hand on it. But keep circling around. You know it’s in there.

BOB DYLAN: Songwriting? What do I know about songwriting? Start me off somewhere.

CHRISSIE HYNDE: It happens all different ways. It’s more like a jigsaw puzzle and it doesn’t make any sense until you find that last piece. I hate to make it sound so pretentious but it is like that. I know they do have to make sense, though. I know that much. It has to make sense of it doesn’t work. When people say, “What is this song about?” the first thing I’ll think is, oh fuck, they don’t know what the song is about, the song is a failure.

BILLIE JOE ARMSTRONG: Songs come from somewhere deep down inside of you that you didn’t even know existed. It’s kind of like seeing a shrink. There can be a lot of anger or sadness or joy that you had but you didn’t even know you really had. And it can all come out. There’s no school you can go to that will help you learn how to become a songwriter. But you can sit down and do it. Especially with rock & roll. But to put something down that is actually really great, it does go beyond you a little bit. And sometimes it takes patience.

MESHELL NDEGEOCELLO: Once I start on [a song],  I hear it all in my head. Once I find it, it’s there. And all of a sudden I just hear it, all of it. I just try to get it to come through my hands. I enjoy writing. I enjoy writing something that’s terrible,  too. Sometimes I have to write five terrible things to come up with one good one. Everything I start I finish. it may not be the best thing but you want to be able to look back and say, okay, that’s where I was at that time. I never throw away anything. I know Picasso painted a million things all the time. S you just got to go with it

BILLIE EILISH: Sometimes inspiration doesn’t hit you for months on end, and what if it’s four in the morning and suddenly you have an idea for an entire song, or two or three? Or an idea for a movie plot or an idea for a book? Inspiration comes whenever it wants to. If you don’t let it happen, you’re just shooting yourself in the foot. Even if you should be asleep, if it’s late, if you are writing, if you are creating, that’s what matters. Because it only comes when it comes.

JOHN PRINE: The more the listener can contribute to the song, the better; the more they become part of the song, and they fill in the blanks. Rather than tell them everything, you save your details for things that exist. Like what color the ashtray is. How far away the doorway was. So when you’re talking about intangible things, like emotions, the listener can fill in the blanks and you just draw the foundation. I still tend to believe that’s the way to tackle it today.

JAMES TAYLOR: I feel that music exists outside of human consciousness. We manipulate it and arrange it, but it represents laws about the physical universe; an octave is an octave because it’s twice as fast as the octave below it. To practice music at all is to give human consciousness the slip. That’s why it’s so associated with spirituality. To listen to it is to experience another type of reality, and one that must be true, because it’s mathematically true. Music is physics.|

LAMONT DOZIER: [As a songwriter], there are no bad days. There are good days and there are learning days. When things aren’t going right, there’s always something to be learned from the experience. There’s a way to grow and improve. To live up to your full potential, you have to approach writing and life with humble awe. You do damage to your psyche when you say, “I’m having a bad day.” There’s no such thing as a bad day. If you woke up and you’re breathing, you’re having a great day. The days, they fall in place the way you want them. If things don’t go the way you hoped, that’s a learning day. It’s something you learn. But it’s all good.

RANDY NEWMAN: My first advice would be to be tough enough to hang in there. And fight it. A lot of it is stamina and toughness. And don’t let the critic become bigger than the creator. Don’t let it strangle you. Go ahead and write `I saw this girl/she was the best girl in the world…’ Let it go. Put a string of stuff together. Go ahead. And then futz with it. Make something happen. Write something down. Do something. And stay there. Stay there three hours, four hours. And good things will happen.

FINNEAS: A song played solo is almost always more compelling than a produced record. If the song is great. If the song is only good, the production usually is part of its success. But if a song is great, it’s at it’s very best when it is sung and played by one or two people.

PETE SEEGER: I didn’t really start writing songs till I met Woody Guthrie. And I suddenly learned something that was awful important. And that was: Don’t be so all-fired concerned about being original. You hear an old song you like but you’d like to change a little, there’s no great crime in changing a little.

RICKIE LEE JONES: Writing a song, it’s like creating a universe. When we die those little universes will be floating around and people really into this universe we are creating places that people go into and they go into the songs. it’s mysterious. I think making songs up might be much more important than we think. So when I’m gone those will all be here and the place is all their own that’s really incredible I’m excited about that.

JOHN FOGERTY: It has to be your obsession. I know life takes you over. You’re an adult in the world and you have a lot of responsibilities and you get pulled here and there and all over. But at some point, it has to become your obsession again, and you have to decide that you won’t let anything get in the way of it. You want it, you desire it so much, it’s just the most nagging, angsty thing in your psyche. Then you can’t be lazy. Because it’s gonna come knocking on your door and there’s going to be those moments when you are out doing something else, and then something starts scratching on your temple, as it were, and says, “I got this idea for you, John!” You have to go wherever you go, sit down with your guitar or whatever it is you need to have to help you, and your notebook, and get really quiet and only think about that.

So, there are two parts: You have to want it, to the point of obsession. But then you have to work for it, to the point of heartbreak. Because sometimes you do that work and you don’t get there. But then suddenly that veil is lifted, and it comes out of you. And you say, “Oh, is that how this goes?” And from then you can start to do it as you’re driving, or as you’re walking up a hill one day, because your brain keeps working on the little bit that’s been shown to you.

But until you’ve got that, you don’t know what you’re doing. You’re just floundering around in the shallow water.

All quotations from interviews in American Songwriter by Paul Zollo. 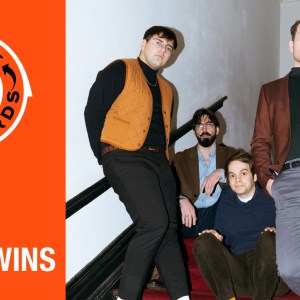