On Sept. 2, the ‘Words + Music’ releases kick off with Laura Jane Grace’s Black Me Out, featuring the story of the Against Me! frontwoman’s rise in music and struggles living as a trans woman, all weaved around some of her personal and political songs. Elvis Costello’s How to Play the Guitar and Y (Sept. 16), is described as “part Masterclass, part madcap guitar manual,” and Alice Cooper follows with Who I Really Am: The Diary of a Hollywood Vampire, a look at the man behind the makeup and more cryptic haunts of the Hollywood Sunset Strip.

Later in the fall, the series will also release Eddie Vedder’s I Am Mine on Oct. 21, which finds the artist reflecting on “art, sensitivity, masculinity, and ascendant pop/rock-super stardom that defined an age,” while Sharon Van Etten’s All I Can (Nov. 4) unveils the stories behind the singer and songwriter’s more personal songs. The seasonal series closed on Dave Matthews and his story centered around “hope and advocacy” and share new renditions of his songs.

“The prolific artists joining our ‘Words and Music’ slate have created some of the most groundbreaking music of our time, inspiring millions of people across the globe,” said Zola Mashariki, head of Audible Studios, in a statement. “We are thrilled to give our audience a front-row seat to the stories and experiences behind the music we all know and love. These projects will provide an intimate glimpse, revealing how beloved music was made and how these artists continue to create, inspire and entertain fans.” 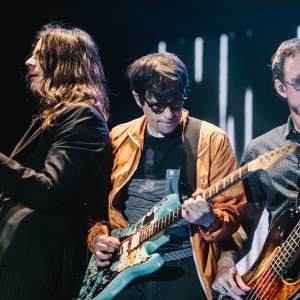