The fabled musical history of Asbury Park receives thorough scrutiny in Asbury Park: Riot, Redemption, Rock & Roll which is now available to stream for free on YouTube through the end of August.

The documentary saw limited release in theaters and streaming platforms in 2019 and tells the story of the “Liverpool of America,” with exclusive interviews and performance footage of Bruce Springsteen, Steve Van Zandt and Southside Johnny interlaced with many local music luminaries.

From its early beginnings in the late 1800’s to its Springsteen-driven Greetings From Asbury Park rise to prominence in the late ’60’s/early ’70s and a simultaneous fall from grace, Asbury Park has always been a town full of, well, unique and scrappy individuals determined to win.

Divided by train tracks in the center, the town was split between a beachside resort hot spot on the East Side catering to well-to-do tourists from nearby big cities, and a neglected but vibrant working-class West Side. Tensions reached a peak in July 1970, leading to an explosive riot, just as the music scene itself was taking shape at The Upstage after-hours club, a melting pot of musical styles that formed the renowned “Jersey Shore Sound.”

Directed by Jersey native Tom Jones, Asbury Park: Riot, Redemption, Rock & Roll was filmed over the course of nearly ten years and even had a first cut debut at the Asbury Park Music and Film Festival in 2017. The big fish missing from that version was Springsteen himself offering his recollections of the glory days.

Surprisingly, he attended the first premiere and played guitar in the concert that followed, a raucous, celebratory jam session that reunited him with his local musician friends, some he hadn’t seen in nearly forty years. The next day, he committed to the project and the entire film was recut.

Springsteen sat for an extensive interview in the long-closed but still intact Upstage, reminiscing about what made the scene so important for his musical development, as well as offering insightful analysis of the cultural divide and tensions simmering. His commentary is as perceptive as you would expect, providing a professorial narrative throughout the documentary.

Steve Van Zandt, David Sancious, Garry Tallent and Southside Johnny supply added star power, and others, like original Springsteen drummer Vini Lopez and bassist Gerry Carboy (Tone with David Sancious), who achieved international success, also provide detailed memories and observations. The best moments, though, are the recollections of the many unheralded musicians who still perform in the area (though some in the film have since passed). Every music scene has its talented working stiffs who live for the music but never achieve instant name recognition. A few of Asbury Park’s legendary local heroes who deserve to see their name in lights are Rick DeSarno, Billy Ryan, Chris Plunkett, Delores Holmes, Gary Cavico, Nicky Addeo, Paul Whistler, Vinny Roslin and Upstage founders Margaret and Tom Potter. They turn the film into an insider’s oral history that could have easily slipped into obscurity.

The redemption part of the film follows the town’s rise from the ashes to its current day renaissance, determined to learn from its past mistakes and embrace inclusion, socially and culturally. It is a hopping town these days, but the segment has a long, promotional-like feel to it. Still, there’s enough joy in seeing young students from the Lakehouse Music Academy rock out with each other. Some of them even get to jam Chuck Berry classics with Springsteen, Van Zandt and the other luminaries at the 2017 premiere. But I’d wager a bet it didn’t matter to them what older person or international rock stars were on stage with them. They’re the rock stars in waiting. 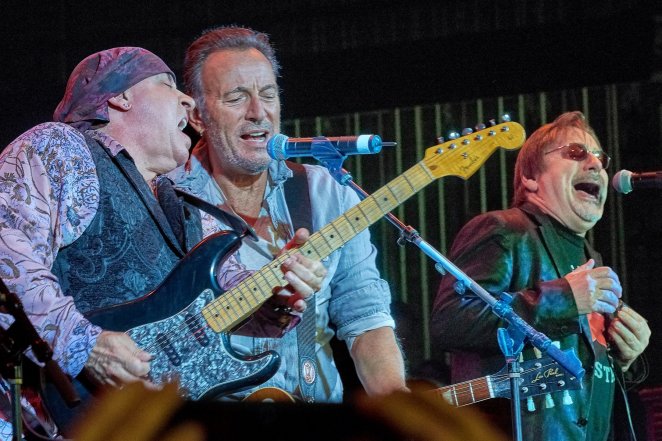