Dave Grohl recently opened up about the extent of his hearing loss. “If you were sitting next to me right here at dinner, I wouldn’t understand a fucking word you were saying to me the whole fucking time,” Grohl told Howard Stern in a recent interview with Foo Fighters drummer Taylor Hawkins. “There’s no way. In a crowded restaurant, that’s the worst.”

Grohl talked about his tinnitus on The Howard Stern Show and clarified that the hearing loss is more severe in his left ear as a result of decades of drumming. “My left ear is worse than my right because of my snare drum and my stage monitor when I play the drums,” shared Grohl. “I tried the ear monitor thing a long time ago and the problem that I have with it is that it removes you from the natural atmosphere of sound.”

He added, “I want to hear the audience in front of me, and I want to be able to turn around and hear Taylor right there and go over here and hear Pat [Smear], and hear Chris [Shiflett]… It messes with your spatial understanding of where you are on stage.”

The Foo Fighters frontman also said that he’s been reading lips for years, and mask-wearing around the pandemic has made communicating more difficult.

“The worst thing about this pandemic shit is people wearing masks,” said Grohl. “I’ve been reading lips for like 20 years. I’m a rock musician. I’m fucking deaf. I can’t hear what you’re saying.”

The hearing loss does impact his life, but Grohl said it hasn’t affected his ability to tune into specific things when recording music and on stage, and credits his sound monitor engineer Ian Beveridge, who has worked with him since Nirvana.

“We’ve been playing shows like this for so long that there’s not much I want to change,” said Grohl. “When we go in to make a record and we’re mixing an album, I can hear the slightest little things. My ears are still tuned in to certain frequencies… in the mix, I can hear the minutiae of every fucking thing that we’ve done to that song.”

Foo Fighters recently recorded an entire album of thrash metal, out Feb. 25, as the fictional band Dream Widow, and released the first single “March of the Insane.” The music is tied to the band’s upcoming horror comedy film Studio 666, and the Foo Fighters revealed that there may be more music on the horizon for the made-up metal band. 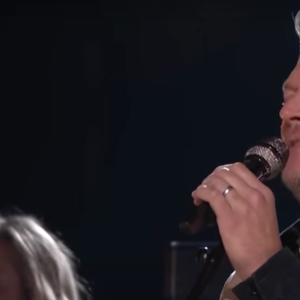