“I didn’t choose to be a songwriter,” says Eric Nally. “Maybe when I was a baby, a song drifted in and enchanted me, or maybe it was with me before I even had a body.”

Trying to pinpoint the exact moment when the art of song entered his being, possibly through some infant virtuosity, there was always a penchant for procuring something from the sounds in his head, then manifesting into his perfect rock band.

“I always had some sense of melody and a burning desire to express it,” he says, “so I started Foxy Shazam.”

Reflecting on the past 15 years with his band, Foxy Shazam’s sixth offering, Burn (EEE OOO AH) marks new era for the theatrical rockers after a nearly six-year hiatus following 2014’s Gonzo. For some time, all went their individual directions with Nally shifting creative gears working with Macklemore and releasing solo material, until Burn started taking shape in early 2019.

“Within a handful of months, we were back exploring new sounds and having fun making music as a group,” says pianist Sky White. “We just didn’t care to share anything after 10 years of constant touring. We were seeking a guiding light in the darkness and came upon Burn.”

During the hiatus, there was never a break from the band. Instead, it was some respite from the industry and touring, and once they reconvened Foxy Shazam operated like clockwork again. “At first, we just took time to enjoy playing together,” says trumpeter Alex Nauth. “Then we started to write, learning each other and the new styles we all had collected from our time apart. Then we took time to craft the songs. We perfected the details and then put it to tape.”

With everything written in 2019, Burn was wrapped up by January 2020, prior to the pandemic. Departing from their Gonzo approach, recording live together in one room with producer Steve Albini, Burn was assembled remotely with White and drummer Teddy Aitkins laying down tracks in Seattle, bassist Trigger Warning and guitarist Loren Turner recording from Kentucky, and Nally and Nauth adding their respective parts at Ryan Lewis’ Mundon Canyon Studios in Washington State.

Even during the pandemic, Foxy Shazam were fired up for Burn with the lockdown and isolation provided the biggest motivator to release their new music to the masses.

“We are staying fearless,” says Nally. “These are the times when we need art the most—gotta step up. I feel like we fit into the free falling circumstances. It takes confidence. Good thing we’ve been a band for 15 years. We take it how it is and turn it in to fuel for the fire baby. Burn Baby Burn! It’s not a free fall. It’s a free dance.”

Though written in 2019, Burn is a resounding echo of the current times, a study of the deeper cells of life, death, isolation, renewal, and hope.

“Conceptually, while writing Burn, we disconnected ourselves from the clock, and it put us in perfect time,” says Nally.

Nauth adds, “Although we had no idea what was coming, something must have been in the wind. The record has only seemed to ring more true as 2020 unfolds.”

During these unprecedented times, says Nauth, is when we truly begin to understand ourselves and our needs, and music is a necessity. “For us, music has always been like drinking water,” he says. “It’s life that must be taken in daily, otherwise you start to feel sick. If anything, the isolation intensified our focus and our need for that. We’ve kept ourselves well hydrated you could say.”

Throughout Burn, Foxy Shazam commandeer their new norm. Burn is a book of anthems, of the times, only Foxy Shazam could conjure up. Ignited from its bombastic opening of “Burn,” Nally chants Start a fire in the mind of a child and the world is gonna burn… Burn baby burn. “When I say burn, I don’t mean to literally go start a fire,” says Nally. “What I’m taking about takes place within.”

“Dreamer,” Burn‘s more tender piano ballad flutters through crescendos, and explores dreams as a refuge from the harsher realities of life, while the climactic “Dreamscape 2020″ circles around another realm of escapism and loss, including Nally’s father, who passed away earlier this year. “Even though we wrote this song before it happened,” says Nally. “I knew that’s what it was about.”

On Burn, Aitkins offers an abstract, syncopated story of averting disconnection on “Into the Wild” and the more harmonious trip of “Never Ever,” both written and sung by the drummer. “We love his words and unchained melody,” says Nally. “He has honesty in his voice that lets you not judge.”

Inspired by the 2007 Sean Penn film Into the Wild, Aitkins autotunes into some warped kinetic space on the track of the same name. “It’s a cry about my ongoing passion to disconnect from this chaotic world and move into what actually matters—friends, family, nature and self,” shares Aitkins. “It’s a song about being connected to reality.”

Shifting from real to obscure reverie, Burn is the perfect cocktail of dramatic rock, something illusory, and pulsating rock. “I think of Burn as a waking dream or dream within a dream scenario,” says White. “Is it possible to be shown such heart-wrenching concepts of loss, death, and destruction with an unusually uplifting light in a serious and truthful way? You are shown all of these glimpses into worlds and not given ground to stand on to anchor yourself. It is already playing out, but is what you or I experiencing currently real?”

Singing under his breath, Nally contributes, “If this is just a dream, I don’t wanna wake up.”

Hope is another element Foxy Shazam wanted to amplify on the album, and there’s also a deeper sensation of honesty they wanted Burn to capture. “Honesty was something that seemed to be desperately trying to escape the songs as we were writing them,” says Hauth. “The songs all felt grounded to the reality of the moment, and we embraced that. There is such darkness in the world that can consume us so easily but hope always finds the places were darkness rests. It’s always finding a way to get through.”

Nally adds, “At first, we let it take us wherever it wants to go. We feel it live in the moment, then we work towards refining it while also preserving where it came from. The most important characteristics of Foxy’s sound has always come before the red button is engaged.”

Always approaching Foxy Shazam organically, this time was no different when the band regrouped in the studio after years apart.

“At first, we just took time to enjoy playing together, then we started to write, learning each other and the new styles we all had collected from our time apart,” says Nauth. “Then we took time to craft the songs. We perfected the details and then put it to tape.”

When writing, White says the band wanted to capture a “loud band playing in a room.” “Every little detail was combed over and experimented with,” says White. “Tones were explored and structures were tested to make sure the musical and lyrical themes played well together.”

At one point, engineer Steven Hogan blasted the volume on some of the tracking. “We tracked the B3 Organ with Leslie so loud.” says White. “It sounded like it was going to explode.”

Also an “entity” within Foxy Shazam since its inception, masked bassist Trigger Warning finally manifested into a more physical form as a member of the band. “He represents ego death,” says Nally. “Let go of the identity. It’s not you.”

Warning says his “form” is based around relationships between separate sections. “These relations range from complete identity of passages on the one hand,” he says, “to the return of a single principle of elaboration or a mere thematic allusion on the other.”

Now that Burn is out, Nally admits it’s hard to even discuss the album since the band is already deep into making their next release.

“I can’t give anything away just yet,” says Nally, “but if you thought the rest of the stuff was good wait till you hear this.” 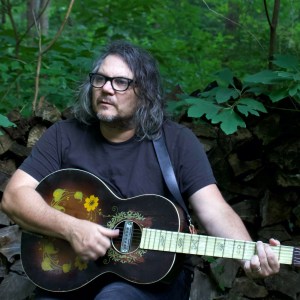 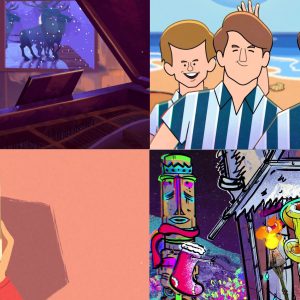