Harry Styles recently stopped by The Late Late Show with James Corden to make a new music video for his song “Daylight,” off of his latest album Harry’s House.

Directed by James Corden, the duo gave themselves a challenge: to make a video in three hours. In their skit, the pair appear on the street talking about the video and timeframe as they look for an apartment to shoot in. “I’ve never directed a music video before, are you trusting me with this?” Corden asks Styles, who hesitantly responds “Yeah.”

Both knock on doors in Brooklyn, New York, and first get turned down by baby boomer-aged residents until four millennial-age women agree to let them use their apartment to shoot. Inside Corden is hiding all the One Direction and Styles artwork, fan paraphernalia, and a Harry Styles “shrine” in one roommate’s bedroom.

“We need to hide all of this because I’m worried you’re a psychopath,” Corden says to one of the girls. “Harry, don’t come in here.”

As the shoot goes on, Corden works on directing the perfect shots, wearing a green screen suit while filming a staged house party with the girls on the roof and even propping a fully-clothed Styles in a bathtub.

“I can’t stress this enough,” says Styles, seated alone in a bathroom. “This was all James’ idea. I was in a Christopher Nolan movie, and this is my dressing room. Should we just scrap it? Is it too late to just do a ‘Carpool Karaoke’?”

Styles is currently on his Love On Tour in North America and recently added more than 30 shows in New York City, Los Angeles, Toronto, Austin and Chicago. 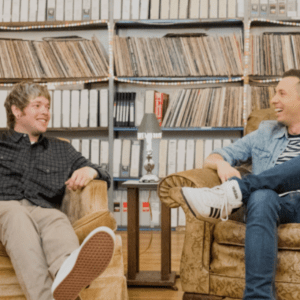