Nicki Minaj has joined the exclusive club of icons like Britney Spears, Beyoncé, and David Bowie after being honored as this year’s MTV’s Video Vanguard recipient.

The Michael Jackson Video Vanguard Award is the most prestigious award in the VMA’s catalog, honoring the lifetime achievements of artists that have made devoted efforts in video creation. On Sunday night (August 28), as has become customary for the honorees of this award, Minaj performed a career-spanning medley of some of her biggest hits, including “All Things Go,” “Roman’s Revenge,” her verse on “Monster,” “Beez In The Trap,” “Chun Li,” Moment 4 Life,” “Super Bass,” “Anaconda” and her most recent single “Super Freaky Girl.”

The award was made that much more special as a group of die-hard Minaj fans presented the award to the rapper onstage. “I never, ever in my life have written a speech, and today I jotted something down on my phone and I gave my phone to Joe and he’s not up here with it because now I don’t remember stuff,” Minaj started.

After finding her phone, the rapper went on to rattle off a list of names that have been integral to her career: namely Lil Wayne, Lauryn Hill, Foxy Brown, Jay-Z, Slick Rick, Doug E. Fresh, Kanye West, Beyonce, Madonna, Mariah Carey, Britney Spears, and Rihanna.

“I have to thank Drizzy for always saying the things I need to hear to get me back in the game,” she said specifically to Drake.

“I wish that Whitney Houston and Michael Jackson were here,” Minaj continued. “I wish that people understood what they meant and what they were going through. I wish people took mental health seriously—even for the people who you think have perfect lives. I wish Pop Smoke and Juice WRLD and Nipsey Hussle were here.”

Elsewhere in the night, Minaj was nominated for Song Of The Summer for her Rick James sampled “Super Freaky Girl” and Best Hip Hop for “Do We Have A Problem.” The accolades keep rolling in for Minaj as just last week, “Super Freaky Girl” became the first song by a solo female rapper to debut at No. 1 since 1998. 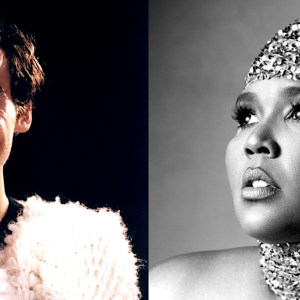