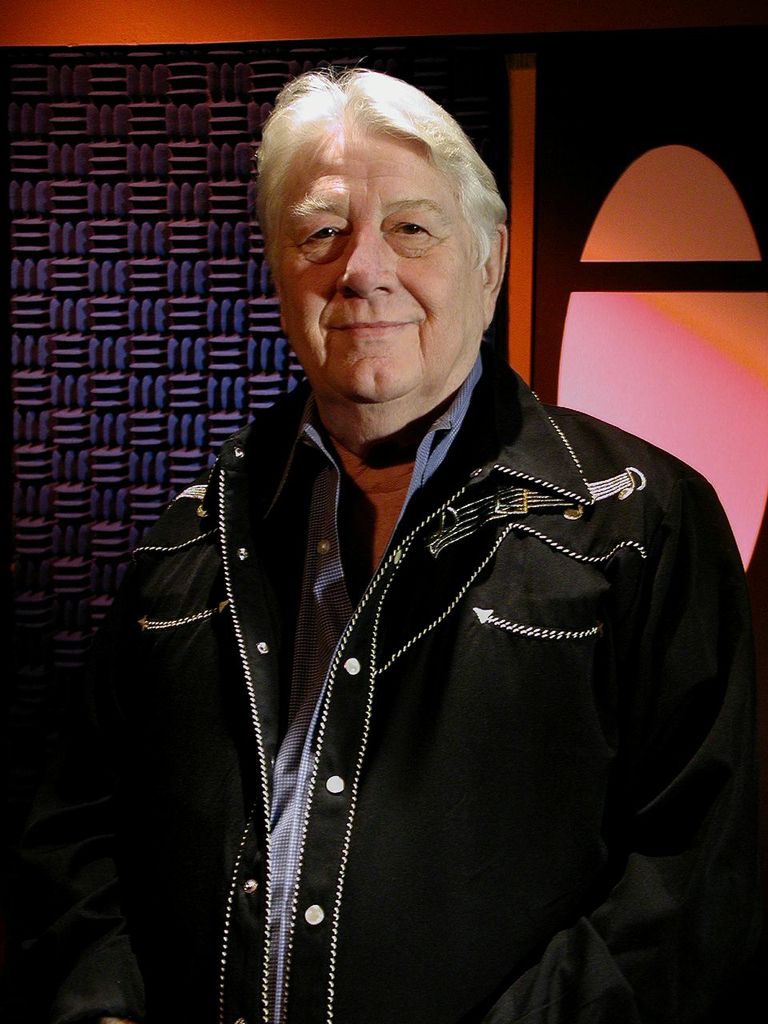 Legendary producer and songwriter Cowboy Jack Clement has passed away at the age of 82. Read Paul Zollo’s meditation on the man from our May/June issue.

He’s a genuine songwriter’s songwriter, in that he writes the kind of songs other songwriters yearn to write, and they record them. A quick look at the list of legends who have cut his songs confirms this: Johnny Cash, John Prine, U2, Kris Kristofferson, Hank Snow, Cliff Richard, Ray Charles, Gram Parsons, George Jones, Dolly Parton, Garth Brooks, Charley Pride, Jim Reeves. And that’s not to mention Elvis, who worked with Jack from the very start.  Songs by Jack include “Miller’s Cave,” “I Know One,” “Just Someone I Used To Know,” “Guess Things Happen That Way” and “It’ll Be Me.” A January Nashville concert tribute to him at the War Memorial Arena showed the full range of his impact, starring as it did Cowboy acolytes Prine, Hiatt, Kristofferson, Bono, T Bone Burnett,  and Dan Auerbach, as well as Michelle Obama and Bill Clinton. The man is beloved.

For he’s more than a songwriter. He’s a catalyst who has always had a keen knack for hooking up with great talent, and bringing out their best. Born in Memphis on April 5, 1931, he studied at Memphis State from 1953 to 1955, during which he played pedal steel, earning the sobriquet “Cowboy.” He made a giant leap by hooking up with Sam Phillips at Memphis’ own Sun Records. Adept not only at the technical aspects of the job, he also had great musical instincts, as proven most overtly when Sam was out of town and a young rocking pianist named Jerry Lee Lewis showed up and Jack wisely recorded him. It was a legendary discovery, and showed that this cowboy knew what he was doing. He recorded “A Whole Lotta Shakin’ Going On,” which propelled the pianist to superstardom, and secured Jack a seat at the console.

“If we’re not having fun then we’re not doing our job.” 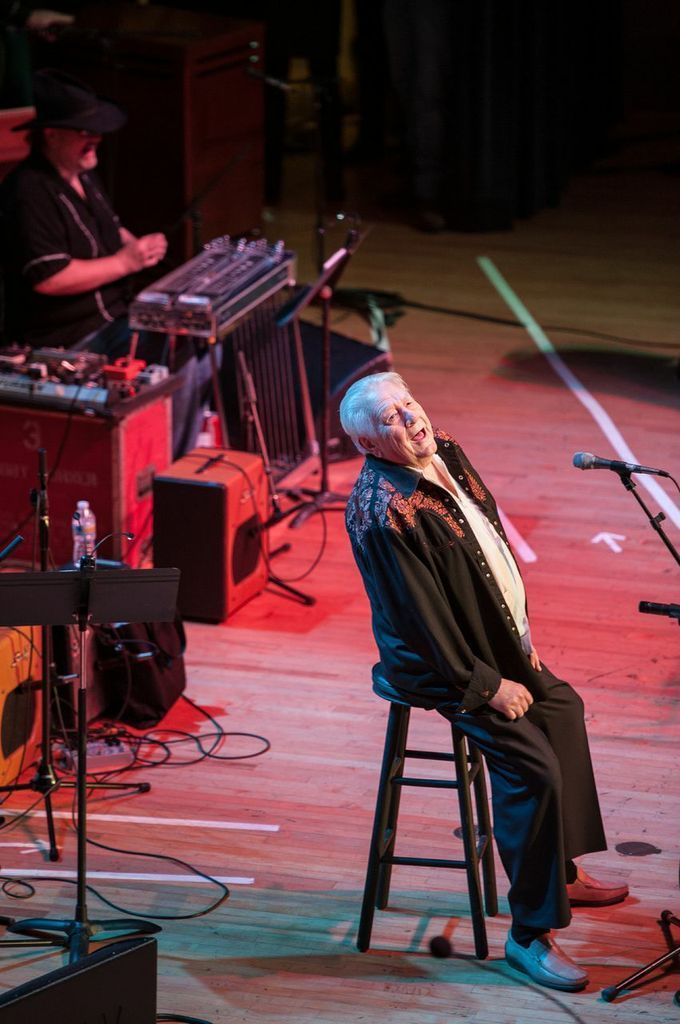 Soon he was doing it all – writing songs, engineering, and even producing. In 1957 he wrote and co-produced (with Phillips) “Ballad Of A Teenage Queen,” which became a #1 Country hit as recorded by Johnny Cash. Although Cowboy wrote it, he wisely was receptive to Cash’s arrangement notions, which led to triumph: “When I wrote ‘Teenage Queen’ in 1957,” he said, “I had in mind a kind of calypso/rhumba, but Johnny recorded it a whole different way. And I’m glad he did.” At only 2:13, it’s a remarkable record, a short movie about a small town girl who goes to Hollywood, ideal for Cash. It lead to a chain of great records, including “Guess Things Happen That Way” as well as the hilariously bluesy “Egg Sucking Dog,” recently featured in VW Jetta commercials. One of Cash’s final sessions was in Jack’s downstairs office, because the singer couldn’t climb the stairs. “He was a wonderful, wonderful man,” Jack said of his absent friend Cash. “I think about him every day.”

In 1956 he engineered one of Sun Studios’ impromptu intersections of greatness when Elvis Presley teamed up with Cash, Jerry Lee Lewis, and Carl Perkins to create what’s become known as “The Million Dollar Quartet,” for which a Broadway musical was created.

Jack went on to write, record and produce great music with one legend after the next, including Charlie Rich, Roy Orbison, John Hartford, Doc Watson, Townes Van Zandt, Don Williams, Waylon Jennings, and even Satchmo himself, Louis Armstrong. And it was Cowboy who broke the longtime country music color barrier when he discovered and produced Charlie Pride, making 20 albums together and forever changing the face of country music.

But it was also his production ideas and techniques, in addition to his songwriting clout, that left his lasting impact on American music. It was Jack, for example, who created the great live studio vibe which led to Jerry Lee’s amazing performance of “Great Balls Of Fire.” It was also Jack who vividly painted another fire record in the studio when he arranged the famous horn riff on Cash’s signature “Ring Of Fire,” a sound which transformed country music.

He soon formed several publishing companies to contain his empire, started his own label, built his own studios, and even produced a cult horror film in 1975, Dear Dead Delilah, which marked the final performance of Agnes Moorehead.

In 1988 he was invited by a band he’d never head of – U2 – to produce classic tracks for Rattle And Hum, including “When Love Came To Town,” featuring B.B. King, “Angel of Harlem” and “Love Rescue Me,” with backing vocals by Bob Dylan.

These days he hosts a Sirius XM Radio show called Outlaw  Country. “I’ve got a bunch of people who say I’m a genius,” Cowboy says with a smile. “That don’t make me a genius. But you’ve got to be pretty smart to get all them people to say that on cue.”

When you ask him what the secret is to making music so good his whole life, he says it’s no secret at all – music is fun: “I’ve been a music bum all of my adult life,” he said. “Making music has always been my hobby and it still is. I’ve always said that we’re all in the fun business, and if we’re not having fun then we’re not doing our job.” 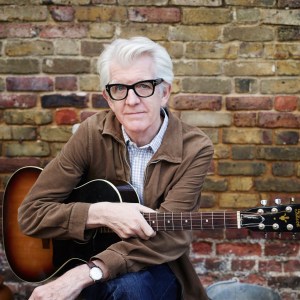 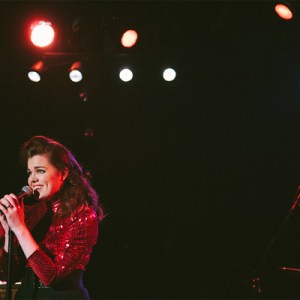