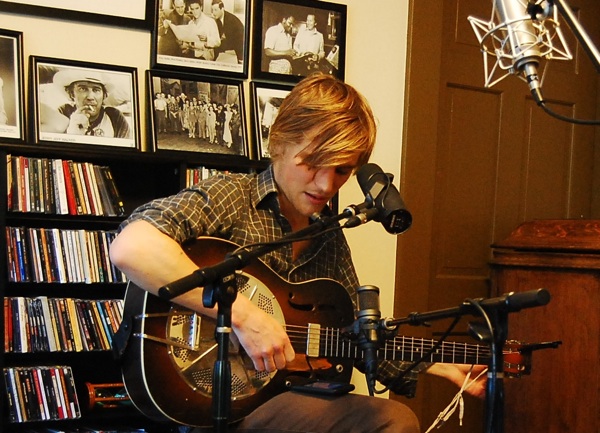 We were excited to have British folk sensation Johnny Flynn stop by and play us some songs from his brilliant new album, Been Listening. Listen as Flynn weaves a spell with just his golden voice and his resonator guitar.

“Lost and Found”-Johnny Flynn from Caine O’Rear on Vimeo.

Who were some of your early influences, and who are your influences now?

I feel like Dylan’s kind of a staple.  He was the first songwriter that I really got into, just for his songs and his self in the songs and his style of writing.  I went to New York when I was about 19 because my girlfriend was studying there, and I came across a few musicians playing there.  We’d go and see them play whenever I’d come.  A guy called Langhorne Slim, who’s since become a friend,  I thought he was the best performer, I’d never seen anyone do what he does.

Your work is very rooted in English culture, such as naming a song “Wayne Rooney” after the British football player. How do audiences in other countries react to that?

I think it’s definitely recognized that we’re English.  When I’ve played in America, on this tour and on the last tour, people come to the shows as if they’re old friends.  There’s such a lovely kind of warmth from people, and they seem really happy that we came all the way out.  It is like, we’re from another culture, everybody comes out to check out what’s going on and see what the other place is up to, and see these guys from London or wherever.  That’s really nice.  I mean, it happens when an American band come to England, like when Langhorne or Jeffrey Lewis or whoever, when they come out to London, me and all my friends go out and see them with the same kind of, “It’s cool that you’re here.”

I read this book by Joe Boyd, he’s a producer, he discovered the Fairport Convention and produced Pink Floyd and all this stuff.  Like, all sorts of cool stuff.  But he wrote a book called White Bicycles, which is his account of his early career in music and everything from running blues tours in Europe in 1963 to the mid-70s, when he was producing Nick Drake and that sort of stuff.  He was talking about Fairport Convention, because he was working with them in the years that their first few albums came out, and they were like, “Oh my God, that’s so distinctly American, it’s wonderful what they do.”  And it was a call to arms for them to go right into themselves and their own culture and record albums that were distinctly English, but not exclusively, also borrowed from different cultures, and I feel the same way.  Like, we are from the UK and can draw on that, but it’s so nice, learning from people, other places, and traveling and stuff.

What are some of the differences you’ve observed in the way that English and American people view music?

I made some kind of ironic joke the other day, I think I was kind of making a dig at something, but in my head I quite clearly wasn’t making a dig, and I solidly forgot that I was playing to an American crowd and they were a bit, “Whoa, he’s being negative about that person.”  It’s really normal to be incredibly sarcastic all the time in England.  There are slight mistranslations sometimes.

Generally, it’s pretty different, to be honest, the reaction.  I can’t describe how.  American crowds–this is a big generalization–but if they like the music, they’re into it, and there’s no other story attached to that.  They don’t have to pin anything on the person.  But in the UK, probably because of the way the British media operates, they’re always trying to attach things to people and stories to people and even dig stuff up from their past and misinterpret things about where they come from.  There’s that kind of thing in Britain that is not so helpful in terms of just putting out music and being passionate about making music.  Quite often, a whole album review will not be about about the music or the quality of the songwriting, but it’ll just be about what school the person went to or whom they’re friends with.  Sometimes, that makes me a bit depressed.  I don’t think it’s nearly as bad in America.  I’m sure you have your tabloid culture as well, but it’s so prevalent in Britain.  It’s a huge part of everyday life.

What inspires you to write songs?

I feel quite a compulsion to write, I actually get kind of depressed and anxious if I don’t.  It’s like a form of diary-taking that I find quite cathartic.  Just in words, usually, like when I’m on the bus or whatever, when I get home I feel like I ought to turn them into a song.  A new depth is added to them.  It’s like I do the sketch, and then I come back and paint it in.  I really enjoy it, and I don’t want to push anything there, but I don’t feel like I have to do it.  Well, I do feel like I have to do it, but not from anyone other than myself.  If I was sitting with a pen and a notebook, I would start doodling, and pretty soon I would start writing down words and thinking about it and just let that happen.

Have you seen your songwriting process evolve since the first album?

I feel like the craft of it has reined itself in a little bit more and musically, I’ve grown a bit, so I can have more tools to use.  I still feel totally the same, like the answer to “why do I write songs?”  You see things around you that you have to set down.  You have to join in with the cosmos, you have to relate to that somehow and try and understand it or not, or surrender to it.  Quite often, that for me is making a song about it.  That is still as raw and as powerful a compulsion as it ever was, but the technique has become a bit better. 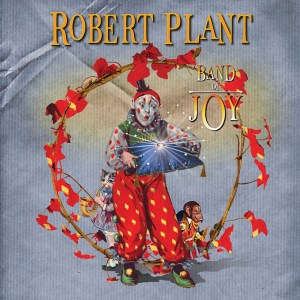 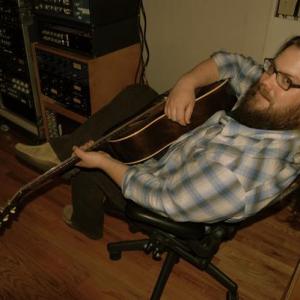