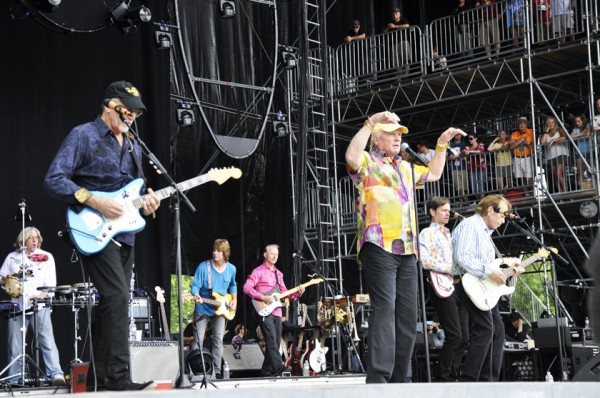 “As we used to say back in Southern California, that was bitchin’!” Mike Love exclaimed ten minutes into the Beach Boys’ set, after the band wrapped up a pitch-perfect version of “Surfin’ Safari” with the help of several thousand loud, screaming Bonnaroo fans.

With dark clouds looming overhead — a holdover from the rain that doused Bonnaroo all morning long — the Beach Boys had their work cut out for them. People were tired, having partied their way into oblivion during the previous evening, and the weather was dreary, a world away from the sun-streaked West Coast climate that populates most Beach Boys tunes. The boys of summer still delivered, though, running their way through a mammoth 31-song setlist that included two new songs, a few Smile-era deep cuts and about two dozen golden oldies.

Mike Love and Brian Wilson have always been the yin and yang of the Beach Boys’ sound, with Love gravitating toward simple pop songs and Wilson pushing for more complex, cerebral stuff. Both members are back in the lineup, along with three of their old-school bandmates (Al Jardine, David Marks, Bruce Johnston) and a seven-piece backup band, but this still felt like the Mike Love show. Wilson sat the piano, cataonic, while Love strutted his way around the stage like your drunk grandfather at the family Christmas party, making inappropriate comments to the women in the audience and miming the lyrics to every song with his hands. He rotated an imaginary steering wheel during “Little Deuce Coupe” and balanced himself on a pretend surfboard during “Surfing USA,” just to, you know, make sure we all understood what the songs were about.

The whole thing was purposely corny, but something changed mid-way through the set, once the guys grew bold enough to tackle Brian Wilson’s “Heroes and the Villains.” There were thirteen men onstage, and all of them sang together in perfect harmony, navigating their way through the song’s chromatic intervals and difficult a cappella sections like the captain of the Sloop John B. It wasn’t a perfect performance by any means, but it was the first highlight of a set dominated by family-friendly classics, not mention a helpful reminder that these guys can really, really sing.

The new material was a nice change of pace, too. “Isn’t It Time” occupied the middle ground between doo-wop and rock & roll, sounding like some forgotten B-side from the band’s early days, and “That’s Why God Made the Radio” proved that Wilson can still write a lush, cyclical pop opus while pushing 70. Bitchin, indeed.

By the time the Beach Boys returned to their familiar songs for the homestretch, the crowd had swelled to several times its original size, and people were eager to sing along. And sing we did, howling the words to “God Only Knows,” “Good Vibrations,” California Girls” and “Help Me Rhonda” as though we’d been transported back to the band’s Space Age heyday. The musicians were obviously touched by the response — Johnston made several laps around the stage’s lip, wide-eyed, mouthing “thank you” to people in the front row, while Wilson got up from the piano bench and strapped on an electric bass, shuffling back and forth during the last few numbers — and even Love’s stage antics became sort of awesome, the perfect addition to a show that walked a fine line between cheese and substantive, timeless pop/rock.

“America! Fuck yeah!” shouted the guy beside me, his fist raised in triumph, once the band had wrapped up its encore. You said it, buddy. 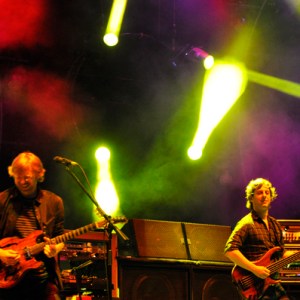 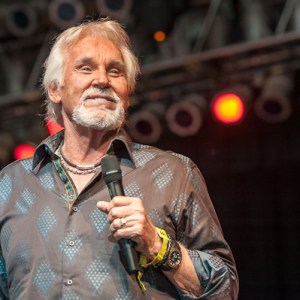