Following the deadly crowd surge at his own Astroworld festival last year, Travis Scott is set to play his first U.S. festival dates since the tragedy. Running from September 2 through 4, the rapper has clinched a headline billing at Day N Vegas taking place at the Las Vegas Festival Grounds.

Scott was previously booked to headline the festival last year but dropped out just days before his appearance in light of Astroworld. His headline billing was instead taken over by Billie Eilish.

Goldenvoice, the same promoter behind the Coachella and Stagecoach festivals, has not yet commented on the decision to book Scott less than a year after the Astroworld tragedy.

While Day N Vegas is the only U.S. festival that has booked Scott so far, it was previously announced that he would play several iterations of the Primavera Sound Festival in South America. The first show is slated for November 6 in Sao Paolo, Brazil with subsequent sets being held in Buenos Aires, Argentina, and Santiago Chili on November 12 and 13, respectively.

Slowly making his way back into the public eye, Scott appeared at a pre-Oscars party back in March. A video captures him rapping and DJing for a brief moment. He also reportedly performed 5 songs from the DJ booth at a late-night after-party at Coachella.

He made his first televised performance this year at the Billboard Music Awards, playing his 2021 single “MAFIA” amid a stark white room. Later he is joined by a model slowly fading into a trippy, distorted background. Find the full performance below.

As a result of the Astroworld tragedy, Scott was made a defendant in more than 380 lawsuits filed by the victims and attendees of the festival, all of which have been combined into one master case. The suits are seeking billions in damages from Scott, Live Nation, Contemporary Services Corp., Apple, and others alleging that Astroworld was negligently planned and staged.

Scott and other defendants have denied the allegations, with the rapper claiming he was not made aware of the situation until after he got off stage.

Along with Scott, the other headliners for Day N Vegas 2022 include SZA and J. Cole. The festival will also feature performances from Playboi Carti, 21 Savage, H.E.R., Summer Walker, Baby Keem, Trippie Redd, Pusha T, T-Pain, City Girls, Vince Staples, Freddie Gibbs, Syd and Jhené Aiko. Tickets will be on sale from this Friday, June 10 at 10 am PT, HERE. 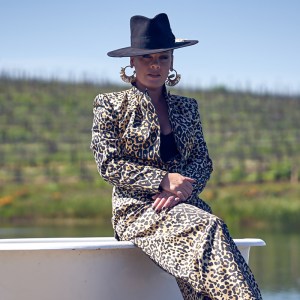