To celebrate the upcoming 20th anniversary of The Lord of the Rings trilogy, late-night host Stephen Colbert reunited a number of the cast members earlier this week and brought in rappers Killer Mike and Method Man to write an ode to “the No. 1 trilly” (or trilogy) of all time.

Check out the rap song, which includes a long preface from Colbert, a noted Lord of the Rings fan, below.

“It was 20 years ago this Sunday that this movie [The Fellowship of the Ring] kicked off my favorite film series of all time,” Colbert said. “What I want to know is: where the hell are the celebrations? How is it possible that we are not marking it as a people!?”

And then… they did!

Colbert himself followed up the segment by sharing the video on Twitter and writing simply, succinctly, “#1 Trilly!”

Elijah Wood, who starred in the trilogy as Frodo Baggins, also shared his thoughts on social media, writing on Twitter, “That really was such a blast! Thank you to everyone at The Late Show for providing all of us with the most special and hilarious way to celebrate the 20 year milestone! Still can’t believe we’re on a track with @methodman & @KillerMike#1Trilly!”

The first of the three movies came out 20 years ago (today) on December 19, 2002. That film, The Fellowship of the Ring, told the quest to take the Ring of Power back to where it was forged so that evil could be defeated and peace could resume in Middle Earth.

Following the first installment, The Two Towers and The Return of the King came next. The latter won the Oscar for best picture. Directed by Peter Jackson, the film won numerous Oscars and has lived on as one of—if not the—best movie trilogies of all time.

More recently, Jackson directed the now-infamous docu-series about the British-born band the Beatles, called The Beatles: Get Back. The movie has since helped the Mop Tops’ music get back onto the U.K. charts.

For more on our coverage of Get Back, click here. 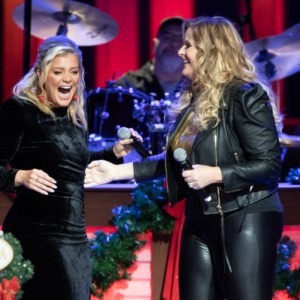