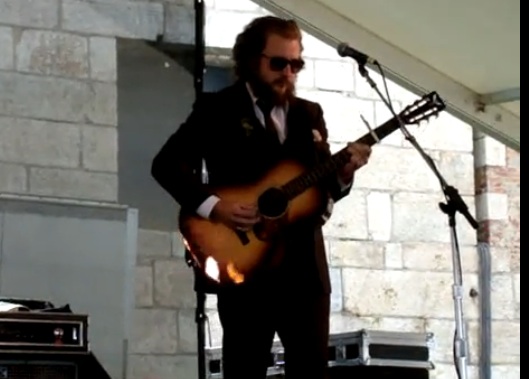 Fort Adams, a defunct decaying fortress on the western boot tip of Acquidnik Island, which recently hosted a Civil War reenactment, hosted a more peacenik crowd this weekend as the setting for Rhode Island’s 2010 Newport Folk Festival. The now for-profit festival which once claimed 20,000 patrons brought in 7,500 on Saturday and 8,500 on Sunday.

With free wine and beer in the media tent, three stages (Fort, Quad, Harbor), beautiful skin-bearing weather, and an excited crowd, my skull quaked with the hardest decision of the fest: Which stage should I go to next? This, followed by the even trickier query: How long should I stay before I check out the act at the next stage? The majesty of the main stage’s view was so absorbing that many artists were stopped in their tracks. “Wow,” said an ebullient Brandi Carlile as she gazed over the Aegean blue harbor, “I could do this all day!”

This past weekend’s hootenanny was a dizzying two day race-through contemporary “folk” tunes. Though, in reality music as disparate as Afrobeat, neo-soul, and progressive bluegrass was represented as well. The greatest success of the weekend was in its collaborations. Jim James, of My Morning Jacket, performed as “Yim Yames” with numerous artists including the venerable John Prine. James also played guitar in the weekend’s best folk set.

Along with Ben Solle and Daniel Martin Moore, James joined New Orleans’ Preservation Hall and Sarah Jarosz for a moving, strident song called “Dear Companion.” The lyrics were inspired by a letter from a miner to his beloved in Ron Eller’s book “Uneven Ground.” A sorrowful trumpet punctuated the evolving song as the rising melody was shot through with an upright bass, humming against Preservation Hall’s thumping drums.

The Low Anthem—like their varied second-hand instruments—was a precious find. The four-person Providence band was recycling garbage after past festivals and now, in 2010, its members found themselves on Newport’s main stage. They arrived equipped with instruments like the harmonica, drums, clarinets, the French horn, and crotales. Saturday’s softer songs flirted with an ambient style. In “This Goddamn House,” lead singer Ben Knox Miller used two cell phones and his own whistling to create an eerie echo. Meanwhile faster, raspier songs like “Home I’ll Never Be” illustrated the group’s impressive range and varied talents. The performers switched instruments throughout and Miller’s voice slid from a whispery falsetto in “Charlie Darwin” to a harsh soulful chantey about the march to Calvary.

Two groups skillfully channeled the power of the mandolin. Sam Bush scratched his way through several boot-clicking tunes, appearing to slice his finger near the end of an exciting set. The Punch Brothers, too, furiously fiddled and plucked their way through contemporary “progressive bluegrass.” The gobble of the banjo with the harpy strike of Chris Thile’s mandolin accelerated to a dizzying pace by the set’s end. The sound, in keeping with the festival’s theme, was a deft fusion of old and new. To wrap up, Thile played Radiohead’s “Kid A.” The tune was held together by a deep bass and sporadic strings which slowly and strangely unraveled into an old school bluegrass song about booze and love loss. Halfway through his set, Thile expressed the overall feel of the weekend, “It’s not often you go to a music festival where people want to hear the music.”

Both seasoned and green journalists backstage eagerly anticipated Doc Watson’s performance. The blind, semi-retired 87 year-old tarheel is a legend for those who follow folk. One willowy freelancer in a tie-dye shirt offered up a story to the imbibers in the media tent: “Doc Watson is a true Renaissance Man. One day years ago, a reporter unexpectedly arrived to Doc’s house to find him reading James Joyce’s Ulysses…in Braille!” Doc didn’t disappoint. Flanked by two fellow musicians (who doubled as the chatty old gent’s conversational guide dogs), the Dr. spun yarns and moved at a slow pace when tuning his strings. “I want it to sound good,” he admitted.

Perhaps the most outstanding performer of the weekend was Sharon Jones. Jones and the Dap Kings had Newport’s mellow audience vertical. Her beats had them shaking and grooving to ”How Do I Let A Good Man Down?,” “100 Days, 100 Nights” and “When I Come Home.” The fifty-four-year old former prison guard, her eyes streaked with yellow pollen eyeshadow, buzzed across the stage in her yellow and black dress like a Queen Bee. Jones winked and writhed through her songs, working the audience up for a rousing performance of her beautiful “I Learned the Hard Way.” Jones and her band are influenced by traditional soul and funk elements but transcend mere nostalgia. She cajoled like Patti LaBelle, belted out like Tina Turner, and directed her band like James Brown. By the conclusion, this small, middle-aged New Yorker proved to be the sexiest and most mesmerizing presence at the festival, commanding the attention of the audience on her own terms.

A cynic could complain about the diminished size and “for profit” status of the show. But the Festival was impressive. It spoke to the resonance and power of musicians who can play their own instruments and write their own songs; music which, sadly, often overlooked by the  mainstream public. How next year’s festival will be able to compete with such a talented line-up is anybody’s guess. But 2010 was a notable year in music in this usually not-so folksy city by the sea.

Brett Warnke is a freelance journalist who lives in Providence. 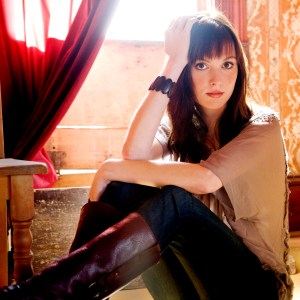