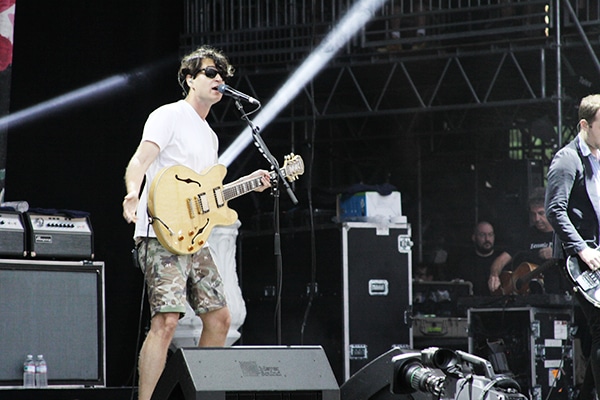 Vampire Weekend is the rare band whose every song sounds like a hit. By modern Top 40 standards, none of them are — but hearing the New York City group’s front-loaded set of radio-friendly jams being performed at sunset before of a Bonnaroo audience of thousands made their catalog feel within licking distance of legendary. Keeping to a simple four-man setup in front of a backdrop of Roman columns and floral patterns, Vampire Weekend began their set with an exclamation point, hammering out the high energy Modern Vampires of the City highlight “Diane Young” before transitioning into a stunning trifecta of “White Sky,” “Cape Cod Kwassa Kwassa” and “Unbelievers.” However humbly this band began, they’ve pretty much got the arena audience thing down at this point.

The downside to hitting the ground at a sprint, however, is that the energy level is hard to keep up for a full 75 minutes without interruption, and by the time the band launched into “Finger Back,” singer Ezra Koenig started to lose full command of his voice, a few bum notes creeping into his delivery and some exhaustion starting to set in.

As the sun disappeared over the horizon, that all changed. Koenig found his second wind, the lights onstage glimmered more brightly, and all of a sudden, what was a group of dudes playing songs turned into show-stopping entertainers. And while they allowed more space between the hits, the more interesting material started to take over. A stunning take on “Everlasting Arms” transitioned into the manic frenzy of “Cousins.” And the bouncy jangle of “A-Punk” gave way to the gorgeous Biblical allegory in “Ya Hey.” By “Giving Up the Gun,” however, Koenig’s hoarseness was back with a vengeance, fraying an otherwise solid performance of the song. He mostly regained his ground on the stunning “Hannah Hunt,” but such is the risk of giving your all in front of an ocean of bodies — by the end, you don’t have much left to give.