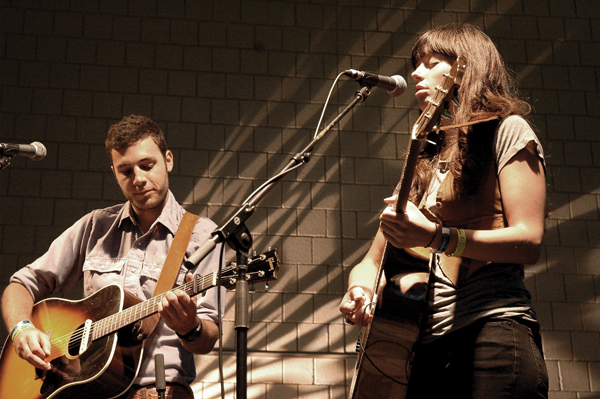 “That was written about my father,” Lera Lynn says of “Bobby, Baby,” which took top honors at the Chris Austin Songwriting Contest in the Country category at MerleFest 2011. “He was an alcoholic and meth addict who died at a young age.”

It’s a haunting, Appalachian-style folk ballad that tells the story of a man who can’t wrest himself from the family tradition of self-destruction. The singer revisits the grave (“a bump on the hill”), and pours whiskey over his resting place. Lynn delivers the song with brooding vocals reminiscent of a former Chris Austin winner who’s gone on to a successful career in roots music and also featured in these pages: Gillian Welch.

“Bobby, Baby” appears on Lynn’s debut solo album, Have You Met Lera Lynn?, released on the indie label Slow Records. Despite the morose nature of the song, the Athens, Georgia-based singer says the tune’s message is, ultimately, not so dark. “It is more about realizing that people don’t necessarily have bad intentions, and it’s about forgiveness.”

Since its inception, the Chris Austin Songwriting Contest has given aspiring songwriters the opportunity to have their songs judged by established songwriters and industry professionals. The man who lends his name to the contest hailed from nearby Boone, North Carolina, and was a sideman in Ricky Skaggs’s band. He died in a plane crash while on tour with Reba McEntire in 1991. Proceeds from the contest go toward the Wilkes Community College Chris Austin Memorial Scholarship.

Each of the first place winners received a performance slot on the Cabin Stage at MerleFest, a Big Baby Taylor guitar, a check for $300, a $75 gift card from Jackson’s Music, as well as a mentoring session with Jim Lauderdale.

The contest has four different categories: country, general, bluegrass, gospel/inspirational. Winning entrants get to attend MerleFest and meet like-minded musicians from hither and yon. Johnny Tanner, who took top honors for the Gospel/Inspirational category with his song “Wake Up, John,” said the contest and festival are about making friends. “We were all hugging in the halls waiting for them to call our names,” he said.

During the competition at MerleFest, Tanner performed his winning song with his wife, who played upright bass. “This is the coolest thing to be scared to death about,” he told the crowd before performing.

A resident of Florence, South Carolina, Tanner has been writing songs for years. He said his wife submitted the song to the competition. News of his victory arrived in unusual fashion. “About a month ago I heard her scream in the office,” he said. “It was a scream I had never heard before.”

The winners in the other two categories for this year’s contest were bands. The Troubadours (David Grindstaff, Benjamin Poteat, David Snider), from Marion, North Carolina, took first place in the Bluegrass division for their song “The Workingman,” a tribute to coal-miners.

Driftwood Fire (Charlotte D. Formichella and Lynn Scharf), a country-folk outfit from Fort Collins, Colorado, clinched the prize in the General category for their song “The Salty Sea,” which will appear on their forthcoming album, How To Untangle A Broken Heart.

“It was one of the first songs I wrote on the banjo,” Scharf said. “It’s a little bit of a love song. It’s kind of the idea that growing up to find yourself means leaving the place that you love.”