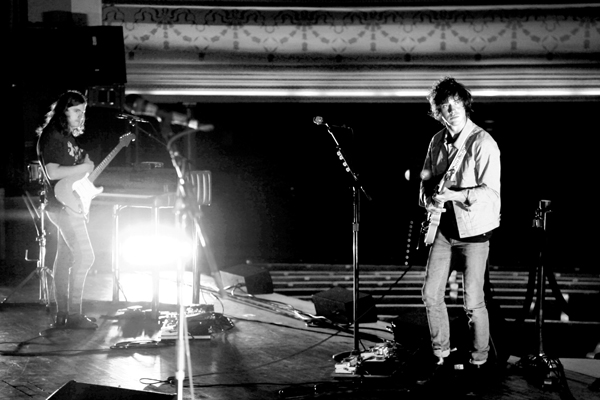 “Yeah, this is a big deal. ‘Cause we’re not joking,” says Andrew VanWyngarden, sipping yerba maté in a tiny teacup in one of the dressing rooms backstage at Nashville’s Ryman Auditorium.

“Yeah, we’re not joking,” adds Ben Goldwasser, the other principal of MGMT, sitting next to VanWyngarden on the couch.

Last week, MGMT played their first-ever show in Nashville, to a sold-out audience at the historic downtown Ryman, one-time home of the famed Grand Ole Opry.

The show was something of a homecoming for Andrew VanWyngarden, who grew up in nearby Memphis, but it was Ben Goldwasser’s first trip to Music City.

The band came to the stage to the roaring applause of 2,000 mostly-teenage fans, opening with the party anthem “Destrokk” from the Time To Pretend EP.

“The Youth,” another early electro-psychedelic sing-along, followed shortly after, to great fanfare.

A few hours earlier in the backstage dressing room, VanWyngarden explained the band’s marriage of their early party hits with the more complex and intricate songs off 2010’s Congratulations.

“We try with the setlist to have a new song next to an old song, but we think a lot about the energy of all the songs in the setlist. We usually play ‘Siberian Breaks’ and ‘Kids’ after.”

The band played 17 songs in all on Thursday, blowing out the Ryman’s PA system during “The Handshake,” one of three encores.

The band’s newer songs, which a week before at MoogFest had seemed at odds with Oracular Spectacular’s dancier material, sounded impeccable, housed within the walls of the Ryman’s world-class acoustics. 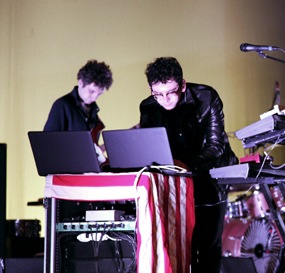 Earlier that afternoon, asked about the band’s next record, Goldwasser referred to his interest in having songs that would open up more on stage.

“Something that’d be fun to do is have a decent number of songs on the album that can easily be extended or have sections that could turn into a really trance-y, repetitive thing live,” he said. “Start off with something and take it somewhere different every time.”

The consensus around the MGMT camp seems to point in the direction of a third album that pulls from the best aspects of Oracular Spectacular and Congratulations.

VanWyngarden said the story in the Scottish Daily Record about the band’s third album was taken out of context and blown out of proportion.

“That’s just something that was picked up, unfortunately, that’s not true,” he said, about the story – re-quoted and intensified by Spin – that the record label was unhappy with Congratulations and would keep the band on a tighter leash for the third record.

Then, in a burst of energy, VanWyngarden says the duo has decided on a title for number three.

“It’s going to be self-titled!” the two say in unison, bursting into laughter, Goldwasser raising his arms in the air in mock-celebration.

The duo say they’d decided on the sophomore album title Congratulations before recording for Oracular Spectacular had concluded.

“Usually if we say something and it gets published, we stick to it. That’s what happened with Congratulations,” says VanWyngarden. 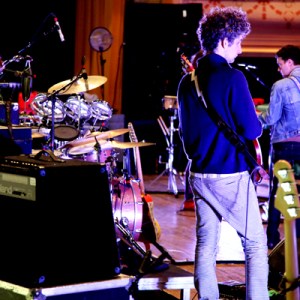 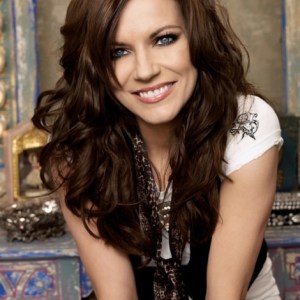