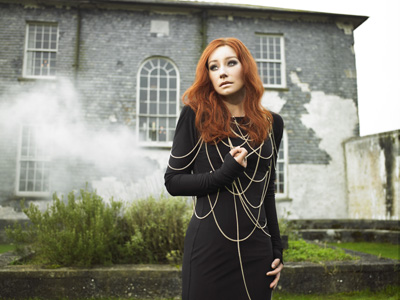 Grammy-nominated piano rocker Tori Amos kicked off the U.S. leg of her 2011 Night of Hunters Tour this week in Atlanta at the Cobb Energy Performing Arts Centre. In support of her first classical album Night of Hunters, Amos was accompanied by award-winning string quartet Apollon Musagète. The two-hour set included several songs from her new album, as well as re-worked versions of various songs from her illustrious body of work. Many of Amos’ most beloved favorites, including “Hey Jupiter,” “Spark” and “A Sorta Fairytale,” have been newly arranged specifically to include the string quartet for this tour.

As the curtain went up, the quartet began to play and Amos (dressed in a flowing teal dress and shiny gold stilettos) received thunderous applause as she joined in on piano. The 48-year-old, fire-haired chanteuse appeared as passionate as ever as she delighted and thrilled an entire theatre filled with nearly 3,000 long-time Amos die hards.“That is not my blood on the bedroom floor,” declared Amos as she began the show with “Shattering Sea,” the first track on Night of Hunters. Upon completion of her opening number, Amos remarked with appetence, “It’s good to be home baby” (a heartfelt reference to the tour’s first performance on American soil), before launching into a brilliant rendition of Fleetwood Mac’s “Landslide.”

Amos was in fine form and voice as she demonstrated her staggering vocal and playing skills throughout the spirited concert, which included ample interplay between the singer and string section. The inspiring set included multiple solo performances by Amos, which seemed to satisfy old-school Amos fans, who still long for the intimate ‘girl and her piano’ days when her career was in its infancy. She voraciously visited her impressive musical canon during the night’s set list, whetting the audience’s insatiable appetite and leaving little to be desired, even among the most devoted of fans. Among the numerous highlights was a heavily re-imagined string version of “Cruel” (from 1998’s From the Choirgirl Hotel), which resulted in the night’s first standing ovation, as well as an inspired and emotive version of Joni Mitchell’s Christmas-time classic “River.”

Amos’ electrically charged performance also included brief moments of humor as she broke into an improvised ditty about how her beloved Bösendorfer piano almost didn’t make it to the Atlanta show. Other times, the artist performed with the intensity of a woman possessed, who seemed to be a mere vessel which the songs commanded and bent to their musical will.

The evening finished with a pummeling climax as Amos returned to the stage to deliver an exhilarating four-song encore, which ultimately concluded with a collective sing-along to “Leather” and “Precious Things” (from Amos’ 1992 solo debut Little Earthquakes), which caused the theatre to erupt in a sea of ear-splitting screams. And finally, a bombastic version of “Big Wheel” (earning Amos her second standing ovation of the night) brought the adrenaline-charged musical affair to a close. Amos’ Night of Hunters Tour is a not to be missed experience for Tori-philes and music adherents alike. 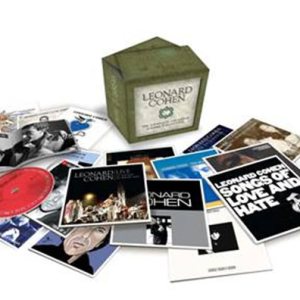 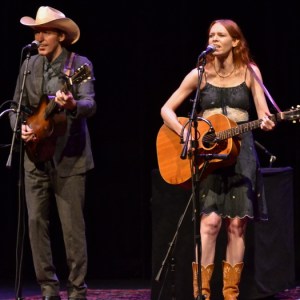