Guitarist Mike Dawes pays tribute to Eddie Van Halen in this jaw-dropping performance of the Van Halen classic “Jump,” complete with Dawes playing all parts on the acoustic guitar, including melody, chords, guitar and keyboard solo.

The UK-based guitarist notes that he hadn’t been inspired to play guitar much lately due to being depressed over “2020.” He was moved to pick the instrument up again “upon hearing the shocking news of Eddie’s passing,” and watching “a great video of Ed going around telling a young fan to ‘play music, just play music man’. I stayed up until 6am that night just playing.”

“When I was 14, I heard Eddie Van Halen play for the first time and his playing changed my world. From transcribing his iconic ‘Beat It’ solo at school to attempting his signature techniques on the acoustic guitar.”

Dawes’ playing is near effortless as he smoothly segues through all the complex parts of Van Halen’s #1 hit. In addition to his original music, Dawes is renowned for his inventive playing and interpretations of rock classics, including Metallica’s “One” and John Mayer’s “Slow Dancing In A Burning Room.

Dawes also focuses on Van Halen’s songwriting and composition skills, which take “Jump” and so many Van Halen classics beyond the usual guitar-focused tributes.

“The night after Ed passed I stayed up until 6am compelled to try and arrange this. Not for any kind of crass bandwagoning but because Eddie’s music IS the reason I play guitar, especially fingerstyle funnily enough. My first introduction to fingerstyle was seeing the late Eric Roche perform a version of Jump in the UK on a new website called ‘YouTube’.

I was moved to start this journey and sincerely hope that this tribute to Eddie’s legacy hits the right notes. It’s all up for free at http://mikedawes.bandcamp.com with no ads or anything. I just want people to know that the Van Halen guitar style transcends ‘that sound,’ and strikes chords with guitarists of all styles. Thanks to the Tonewood Amp for helping with the writing process. It always sounds boring without it.”

Dawes is playing a boutique guitar built by German luthier Andreas Cuntz Guitars, complete with added Van Halen style stripes. Some of the effects used for arranging and recording the song include:

Tonewood Amp: a reverb unit that attaches to the back of the guitar, which Mike used in his initial arrangements 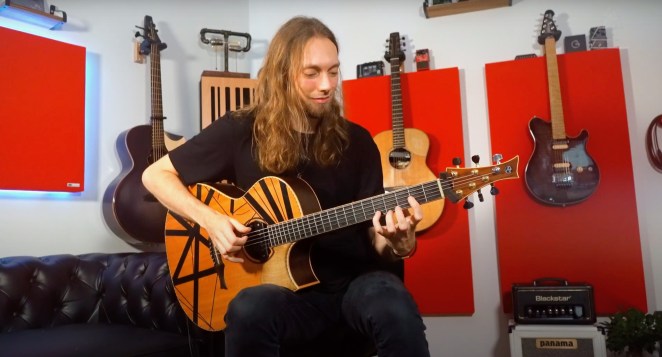