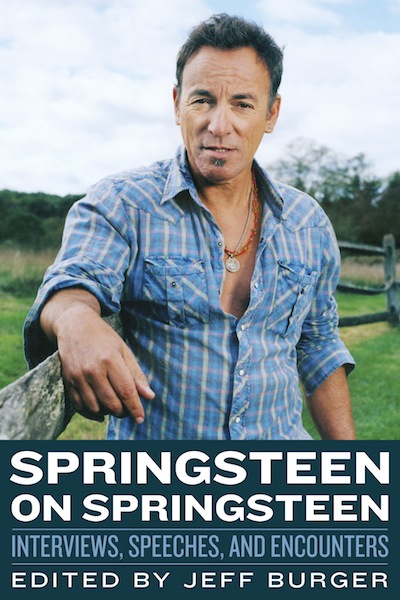 “There’s a time-bomb in the heart of every great rock band,” said Bruce Springsteen while inducting U2 into the Rock & Roll Hall of Fame, and it’s in the way that he’s controlled the combustible force of his own time bomb over the decades without imploding that’s at the heart of this collection of interviews, essays and speeches. Because at this moment in America,  Bruce Springsteen is more than a rock star; he’s a genuine American hero. At 64 he’s still out on the road, still in perfect shape, playing three hour straight shows with a band that just keeps expanding in many great directions (rather than replace the late great Big Man, Clarence Clemons, with another sax-man, for example, he got a whole horn section.) What was phenomenal when he was a young man is positive heroic these days, as he persists in being a great figure of hope for all of us.

His story is not your conventional rock tale of drugs, hedonism and other methods of self-destruction. Far from it. According to early interviews, Bruce never smoked even a joint, much less the harder stuff which took over the lives of so many of his peers. Nor did he ever drink.

Which is not to say that his road was an easy one. His primary challenge, as well-illuminated here, was to stay true in a world where truth is rare, and to remain grounded in the face of  unfathomable success,  as well as the relentless self-doubt, fueled by his father’s lack of faith in him, that he’s harbored his entire life.

This book is a must for any Springsteen lover as it has so much – not only a wide range of interviews in all media , here and overseas, but a collection of beautiful speeches written and delivered by the Boss over the years. Journalist-author Jeff Burger’s love of the subject comes across in this vast profusion of unexpected material he’s discovered, allowing the reader to view Springsteen from many angles, and over the decades. There’s the expected magazine Q&A  interviews, going all the way back to 1973, all of which are a joy to read, reflecting the evolution from brash but confident youth to world-weary acquired wisdom to folk hero.

But it’s those speeches which really show you the Lincoln-esque side of this guy, the eloquent, impassioned speaker who surely could have been a great politician if he weren’t a songwriting genius. Who can speak about America as beautifully as he did back when Obama was still a senator in 2008, and he went to Cleveland to urge America to vote for him with these words. It tells you a whole story about this man’s soul that doesn’t contradict the spirit of his songs, but confirms it:

“I’ve spent thirty-five years writing about America and its people.  About what does it mean to be an American, what is our duty, our responsibility, what are our reasonable expectations that we live in a free society. I never really saw myself as a partisan, but more o an advocate for a set of ideas: economic and social justice, America as a positive  influence around the world, truth, transparency and integrity in government, the right of every American to have a job, a living wage, to be educated in a decent school, and to have a life filled with the dignity of work, promise, and the sanctity of home. These are the things that make a life. These are the things that build and define a society. And I think that these are the things that we think of at the deepest level when we think about our freedom.”  – Bruce Springsteen, November 2, 2008.

His induction speech for Dylan into the Rock Hall is also a treasure. His first exposure to Dylan, he wrote, came from his mom’s car radio and sounded  “like somebody kicked open the door to your mind.” He wrote “Where great rock music is being made, there is the shadow of Bob Dylan over and over again,” showing all music scribes how it can be done.

There’s also a great Obama stump speech, and his beautiful eulogy for his fallen brother Clarence Clemons: “Big Man… thanks for the miracle… and for letting a little white boy slip through the side door of the Temple of Soul.”

In the interviews you have a real chance to look into the soul of this guy. And though he went through unfathomable success, it’s surprising and somewhat sad to see how unhappy he was. Lack of success was a mountain he had to surpass, and when he did his challenge shifted to how to stay grounded even when shot like a rocket into the stratosphere.

So many times in these talks Bruce returns to the subject of his dad, how much he wanted to impress him, and how many times he failed, that it’s pretty clear the old man’s indifference to his son’s talent impacted him so thoroughly he never recovered. It might be the reason that Bruce, even after enormous commercial success, felt there was somewhere farther to reach, something still to prove, new mountains yet to climb. Rather than ever rest on any laurels, his journey has always been about forward-momentum, never resting too long in the easy pocket of success so as not to get stuck there.

All the parts of the story – the Jersey phenomenon, the life and times of the E-Street Band, his decisions to go solo, his marriages – all of it is here. It’s a revealing  and redemptive journey, both harrowing and heroic, across the arc of this singular career.  There’s a wide range of interviews here conducted by interviewers of various skills, so that some are focused better than others. But regardless of the questions asked, the answers throughout reveal Springsteen’s prodigious  dedication through the decades to fully embrace what matters most for himself and his audience: to never lose sight of just how much this music matters, and to always offer an affordable ticket to that inspirational Land of Hopes and Dream of which he sings. If you’re hungry to learn about the true soul of this remarkable man,  look no further; it’s all here. 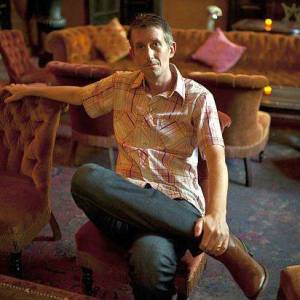