Brandi Carlile knows how to make an entrance.

The Grammy Award-winning songwriter and performer showed just that on Wednesday night (October 19) when she announced a couple new shows on Comedy Central’s The Daily Show with Trevor Noah.

Carlile’s forthcoming new dates, which will take place at The Gorge in Washington, will include a special guest: Joni Mitchell. The legend will be joining the up-and-coming legend on the road for the first time.

Also during the show, Carlile talked about her album, In the Canyon Haze, being a revision of music and the ultimate labor of love. She also performed the song, “You and Me on the Rock,” alongside her wife, Catherine Carlile.

Carlile tweeted about the occasion, noting that it was her wife’s first time performing on national television, writing to her swath of fans on Twitter, “Catherine Carlile made her Television debut last night! Also, we’re just going to embrace the whole couples turning into one another cliché by full-on twinning… Thank you @TheDailyShow and @Trevornoah for having us out and asking such brilliant questions”

The joint effort with Mitchell comes as the two have begun a burgeoning friendship over the years. In her memoir, Broken Horses, Carlile talked about her adoration of the legendary songwriter and how she has been playing with Mitchell in “secret” jam sessions, which have included other big-name musicians.

Mitchell, who recently suffered a stroke, has slowly recovered and, with the help of Carlile, has been embracing the public eye more and more, as a result.

Carlile has formed friendships with other legends of late, including Elton John and Dolly Parton, whom she brought out on stage at a recent Newport Folk Festival in extreme elegance.

Check out the clips below to see the entire interview, hear more about the tour, and watch the Carlile’s performance on The Daily Show with Trevor Noah. 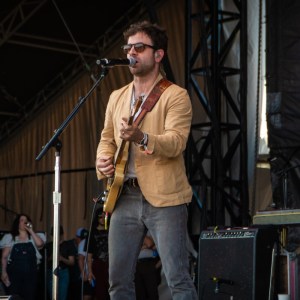