Around a decade ago, Gruff Rhys found a clever way to break out of his musical writer’s block: biographies.

“I found that writing a biographical record was a way out of a songwriting rut, so to speak,” the Welsh artist (of Super Furry Animals and the Cool Cymru cultural wave) told American Songwriter. “I was writing about someone else rather than writing about myself, which was very liberating. The songs seemed to write themselves.”

Starting with a 2008 release from his electro-pop duo, Neon Neon, Rhys began releasing a string of brilliant biographical concept albums that both illuminate history and offer a new perspective on the modern world. In the past, he’s taken on fascinating subjects such as the inventor John DeLorean, the Italian publishing giant Giangiacomo Feltrinelli and the Welsh explorer John Evans—now, on May 21, Rhys is set to release one of his most adventurous biographical works to date, one so adventurous that its subject isn’t even a human.

Now, before you start second-guessing the conceptual soundness of a biographical record focusing on an inanimate hunk of geology, give the record a spin. It doesn’t take too long to see that what Rhys is actually documenting is a far more poetic and beautifully human story than what might meet the eye.

“I actually have no idea how it’s pronounced,” Rhys said, referring to the name of the volcano. “But I was reading an associated book, and the volcano’s name came up in it. I sorta fell in love with the name in print, so I decided to look it up, geographically, and I found all of this mythology around the mountain. When I came across this mountain, I saw it as a way out of the new songwriting rut I had created for myself: a biographical rut. I could write a biography of a mountain—cultures and civilizations come and go, yet the mountain still remains, fairly stable. Even volcanoes can outlast an entire civilization. So, it struck me as something that would be interesting to write about.”

From there, Rhys started putting pen to paper, beginning an almost surprising journey of self-discovery in the process. “The first songs I wrote had a lot of historical facts and dates,” he said. “I was trying to write a more formal biography, I suppose… but, playing them back, it was pretty bad. They didn’t connect emotionally. Then I wrote a song called ‘Mausoleum of My Former Self’ where I was imagining being a volcano, trying to look back on my life as a volcano—how I used to look, maybe I became a crater where I once was a beautiful mountain. I found that really helpful. I was imagining myself as a volcano, but I was actually writing about aging in general. I didn’t try to tell a historical story so much as an emotional one, really. But, without that inspiration I never would’ve been able to write it.”

There is a sort of cosmic quality to the way Rhys and his band put together the songs on Seeking New Gods. From the long, jammy, psychedelic sections to the tender lyrical expressions to the colorful bursts of horns to the poppy hooks on songs like “Can’t Carry On,” there’s a liveliness and electricity gracing each track. In this regard, the emotional story that Rhys tells not only speaks to the head, but to the heart, playing with melodic themes and refrains to bring the tunes to a deeper level. Part of the organic chemistry jumping off the tape is thanks to where and how the record itself was recorded.

“I was very lucky—in 2018, I was touring my previous record called Babelsberg with some very creative musicians,” Rhys began. “I had this batch of new songs and on a three-week tour of the states, we rehearsed these songs at soundchecks and started to play them live. By the end of the tour, they were in really good shape, so I booked a studio for three days.”

Although technical difficulties stopped progress on one of the days, Rhys and his band managed to chug out seven complete tracks in just over 48 hours at the end of this three-week run. “We could only do that because the musicians were so good and we had rehearsed them live—the parts were already pretty dynamic,” Rhys explained. “It really didn’t need much work, in a way. We had all been in a van together for three weeks, listening to the same music, long jammy tracks. After the song would ‘finish,’ we’d carry on playing, jamming and having fun. So, we were all the same wave-link, musically. We didn’t really labor over anything in the studio, we did the laboring beforehand.”

After that, Rhys and the band returned to Europe. A few months later they did another string of shows, which gave them a chance to work up the last few songs. By the dawn of 2020, Seeking New Gods was just about complete. Then, the pandemic hit… which actually wasn’t too big of a blow to Rhys.

“I wasn’t engaging with the moment thematically or musically, so when the record company slowed everything down and suggested this shouldn’t be released yet, that felt okay,” he said. “I wasn’t too frustrated. That could’ve been different if I was making a record that was engaging with a political moment or a technological moment. If you’ve just created the world’s first NFT and have to wait two years before releasing it, maybe that would be a frustrating moment. But, weirdly, there are actually things that still resonate on this record.”

He’s right—while these songs were primarily written and created prior to outburst of the pandemic, there’s something about that whole “civilizations come and go while the volcano remains the same” thing that really strikes a chord in a moment like now. Whether it’s in reference to the undying human spirit or simply nature itself, there’s a strength and beauty in the message of Seeking New Gods.

Even the single, “Can’t Carry On,” hits that message home. While the song is incredibly musical—blending angelic vocal lines with a driving engine and Turkish-inspired percussive vocals—it’s theme is an apt message for today’s world.

“In terms of the way this song was constructed, a few years ago I got really into Turkish and Brazilian music, where often I couldn’t understand the lyrics, but I could connect to the song emotionally,” Rhys said. “Sometimes the lyrics became percussive. So, I think that the percussive nature of the “can’t carry on” mantra of the chorus was influenced by listening to stuff like that, trying to make a percussive thing that can work as emotional percussion or something. Thematically, it’s about an impending eruption. I was trying to convey the sense of scaling a mountain and that no one can do it alone, you need friends to help carry the weight.”

The latest biography in his canon, Seeking New Gods is one of Rhys’ most creative creations to date. Initially inspired by the romantic vision of an ancient volcano, the record soon became a story about something far larger. In a long career spanning 23 albums, tours around the world and a countless number of songs, Rhys’ ability to continuously push himself and explore new territory is a testament to his own resilience as an artist. While volcanoes might be around far longer than any human could ever dream of, Rhys’ career is a testament to the staying power of the human spirit itself.

Gruff Rhys’ new album Seeking New Gods is out on May 21. Watch the music video for the record’s latest single, “Can’t Carry On,” below: 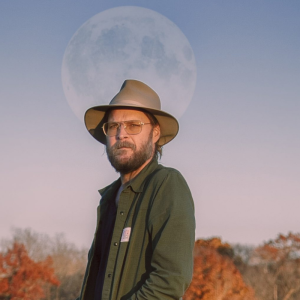 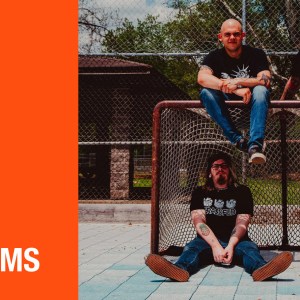