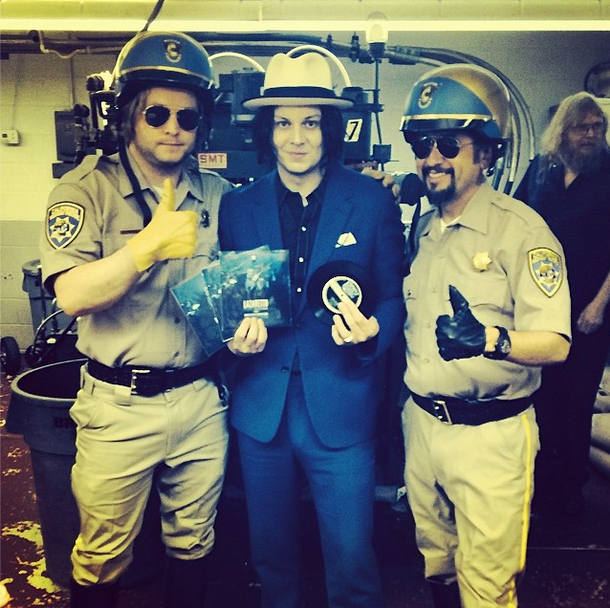 Just after 10 a.m. Saturday, Jack White took the stage in the Blue Room at the Nashville headquarters of his label, Third Man Records, flanked by a pair of escorts in full 1970s motorcycle cop regalia. “Thank you for joining us for breakfast,” he greeted us as he warmed up his band, many of whom performed on and toured behind his debut solo album, 2012’s Blunderbuss. Drummer Daru Jones and bassist Dominic Davis made up the rhythm section, Ikey Owens handled keys, while Fats Kaplin tripled on pedal steel, fiddle and mandolin, complemented by Lilli Mae Rische on fiddle and mandolin and newcomer Scout Paré-Phillips on vocals and autoharp.

First, they took a level-setting run through “High Ball Stepper,” the blistering electric blues instrumental released online April 1. The accompanying video left the unearthly whooping sound that punctuates the liquid piano and slide guitar groove a mystery, but this performance revealed the cooperative efforts of Rische and Paré-Phillips as the source. Then, Grammy-winning engineer Vance Powell and veteran vinyl mastering engineer George Ingram gave the all-clear from the control room, where the next two performances would be cut live to blank acetate templates on a 1955 Scully lathe, which once cut James Brown singles for Cincinnati’s King Records.

White and company tore into “Lazaretto,” the title track from their upcoming LP. With admirable cohesion, the tune drew from the panoply of American music White loves, mixing vintage country and blues riffs with a hip-hop-inflected delivery, garage-punk urgency, and fierce guitar licks fired from White’s blue Telecaster, customized with a TV Jones Filter’Tron pickup, an sanded neck, and hardware hand-painted white by Lin Crowson of Gruhn Guitars.

While Ingram swapped the acetate blank, Paré-Phillips left the stage to be replaced by guitarist Olivia Jean, who played tic-tac bass against Davis on the b-side of the single, Elvis Presley’s “The Power of My Love.” White later told a press conference that the band first used the menacing, propulsive soul stomp as a level-check song, after it was left on the table in pre-production for Wanda Jackson’s The Party Ain’t Over in 2011, but the song slowly made its way into their repertoire. 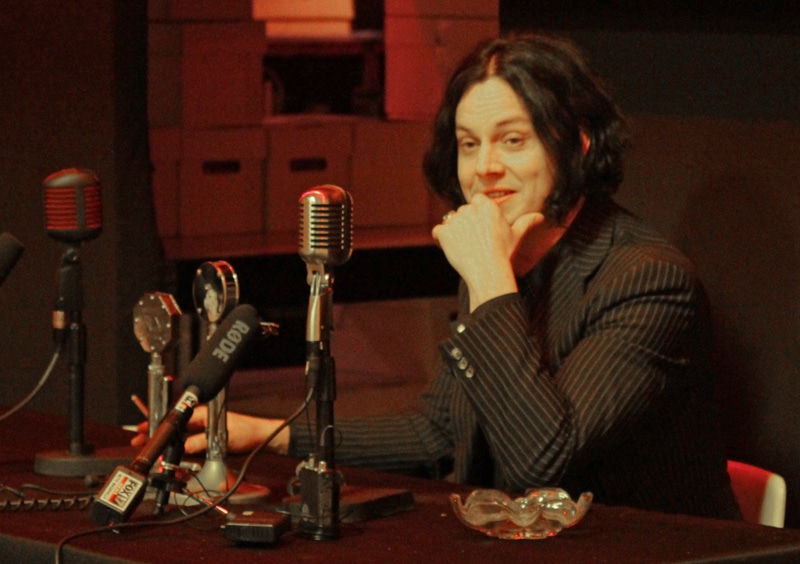 Once their thrashing rendition was over, the master acetates were rushed a few blocks south to the United Record Pressing plant, where they were electroplated to produce the stampers that would then turn molten vinyl and five thousand pounds of pressure into 7-inch 45 RPM records. Before taking off to supervise the production process personally, White and band performed another nine songs for the friends, superfans, and press in the Blue Room, featuring White Stripes classics (“Dead Leaves and The Dirty Ground,” “Hotel Yorba,” and a take on “Hello Operator” sung entirely by the audience), Blunderbuss tracks (“Freedom at 21,” “Love Interruption,” and “Weep Themselves to Sleep”), and even a few new songs (“Three Women,” “Just One Drink,” and “Would You Fight for My Love”).

Three hours, fifty-five minutes, and twenty-one seconds after the discs came off the lathe, White appeared at a special booth built outside Third Man’s store to sell the first copy of The World’s Fastest Record himself. At the head of the line were longtime White associates and early Third Man Records signees Whirlwind Heat, who were on hand to play their first set of synthesizer-infused hardcore punk in six years (“likely their last ever,” according to press releases) and commemorate the re-release of their debut album Do Rabbits Wonder?, recorded by White in 2003.

The record-setting, limited-edition first pressing of “Lazaretto” b/w “The Power of My Love” was available throughout the day to fans and collectors who joined a line stretching down the block. The live-to-acetate single is slated to remain in print on black vinyl in perpetuity, while a studio recording is due April 22, and the full-length record is slated for release June 10.

There were plenty of challenges on the road to breaking the record (previously held by Swiss polka trio Vollgas Kompanie), not the least of which was that, during a test run at 11 p.m. the night before, the stereo cutting stylus was overloaded and rendered unusable. Luckily, a mono replacement was available, to which White quipped with a grin, “Phil Spector would approve.”

Besides being an iridescent feather in Third Man’s cap, the project helps to highlight the struggles as well as the strengths in the evolving vinyl marketplace. It took two years of planning and organization to make the single a reality, including wedging the rush pressing into URP’s consistently busy schedule. During a tour of TMR and URP facilities on Friday, Third Man co-chief Ben Blackwell highlighted capacity at pressing plants as one of the major limiting to growth, noting that the last new record presses were built around 1980.

With vinyl sales continuing to climb and homebrew lathes like the Vinylrecorder T-560 gaining steam, the next phase of growth is likely to involve a solution to the supply-side bottleneck. Running a vinyl pressing plant isn’t easy, and as Blackwell pointed out, choosing not to put a press under their own roof was a wise choice for Third Man, despite the DIY cool of the idea: “I’m not zoned industrial, I have no experience with heavy machinery,” he explained.

Despite potential long wait times and limited availability, patrons showed up in droves to celebrate Record Store Day in Nashville, keeping independently-owned vinyl outlets bustling from dawn til well past dusk. “The thousands of people you see at all the record stores around Nashville – not just Third Man, but Grimey’s [and others] – you can see how popular it is and how important it is to people,” commented White. “Every neighborhood wants to have one.” 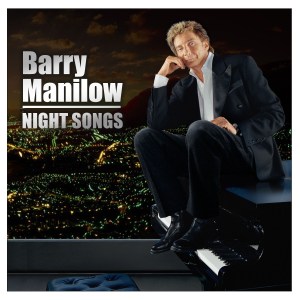 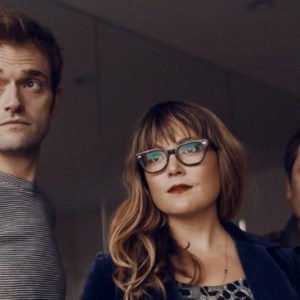