What do you get when you combine one of the best and biggest voices of modern times with some of the biggest names in music history?

In this week’s installments, the Grammy Award-winner covered big names from Soundgarden and Peter Frampton to Trisha Yearwood, Jimmy Eat World, and more. Let’s dive into each.

While she may not be able to make her guitar talk like Frampton, Clarkson doesn’t need to with a crisp, clear golden voice like the one she boasts. Here, she covers Frampton’s famed track, “Baby, I Love Your Way,” the breezy, summery, island-feeling tune he made famous with his soothing tones. Of course, Clarkson knocks the song out of the park. Check out her cover of the song below.

Following that performance, Clarkson offered more throughout the week. On Tuesday (Oct. 25), the singer performed a cover of “How Do I Live” by the beloved country star, Trisha Yearwood. The song is fit for a prom or a night at home with a cup of tea and your favorite cat (or spouse)! Check it out below.

Next up in the week for Clarkson was a cover of “My Boo” by Ghost Town DJs. The rollicking song offers a jolt to your eardrums while also getting your heart pumping for more. It’s a nostalgic track and done supremely well by Clarkson.

Finishing out the week, Clarkson gave fans a taste of two more songs by big-name artists. On Thursday (Oct. 27), she performed the racing track, “The Middle,” by Jimmy Eat World. One of the biggest tunes from the early 2000s, the song was a hit then and one now off Clarkson’s tongue.

Finally, the singer performed the legendary grunge song, “Black Hole Sun,” from Soundgarden. Eerie, hard-hitting and an all-timer, Clarkson dominated the song. Check it out below. And as always, check back with American Songwriter for more “Kellyoke” coverage each week.

Kelly Clarkson at the Kennedy Center Honors (Photo: via CBS) 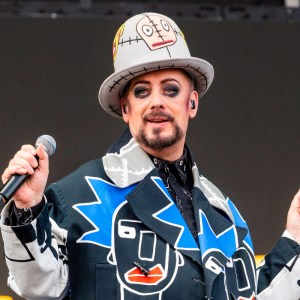