Country stars Miranda Lambert and Elle King brought the audience to their feet while performing their hit collaboration “Drunk (And I Don’t Wanna Go Home)” at the 2022 Billboard Music Awards.

Since releasing the indulgent song in early 2021, “Drunk” clinched a historic No. 1 on the Country Airplay chart, marking the first time a female duet has topped the charts since Reba McEntire and Linda Davis’ “Does He Love You” in 1993.

The duo took the stage in Las Vegas to perform their hit, wearing matching jumpsuits with colorful embellishments unique to each artist. King’s outfit featured a green corset and horseshoes complete with her son’s name, Lucky, while Lambert’s blue fringed number was complemented by a bolo tie and flared pants.

They seemed to be having the time of their lives, dancing around the stage as they sang about drunken nights and unbridled fun. Watch the full performance below.

Along with the No.1 spot, “Drunk” also peaked at No. 37 on the Billboard Hot 100 last month and saw crossover appeal with a nomination for Top Rock Song at the ceremony. Lambert also received a nomination for Top Country Female Artist, but ultimately lost out to Taylor Swift.

Lambert is hot off the release of her latest studio album, Palomino, which saw her create a stunning concept album about the American road. “If I Was a Cowboy” from the LP, scored her another chart-topping hit. Meanwhile, King is solidifying her stance in the country world, putting out yet another duet with Dierks Bentley called, “Worth a Shot.” 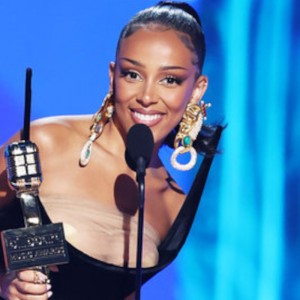