The new Stranger Things Season 4 finale trailer dropped on Tuesday (June 21), and singer Kate Bush has a lot to say about it.

“The track is being responded to in so many positive ways,” she wrote in a statement on her website. “I’ve never experienced anything quite like this before!”

Nearly 40 years later, the record has resurfaced to the top of Billboard charts. “It’s the first time I’ve had a top ten single over there and now it’s in the top 5!” she announced. “Thank you so much again to the Duffer Brothers – because of their latest, extraordinary series of Stranger Things, the track is being discovered by a whole new audience.”

The teaser for Volume 2 features an intense remix of Bush’s “Running Up That Hill,” previously heavily involved in Volume 1 of the Netflix series. The remix is spliced with the show’s theme song by Kyle Dixon and Michael Stein and presents just how important the song is to the season.

But Bush’s track is just as valued by the fans of Stranger Things as by the show. The popular science fiction series brought “Running Up That Hill” to the top of the charts. In fact, the Duffer Brothers have caused the song to break records. The tune entered the U.S. Top 5 and topped the Billboard Global 200 as it reached No. 1 in the U.K. and Australia.

The track is part of Bush’s fifth studio album, Hounds of Love, released in 1985. This is the English singer’s first time ever making the U.S. Top 5 and Billboard Global 200 charts.

You can watch the trailer and listen to the remixed song below. 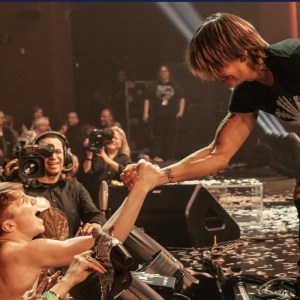