Sam Smith is spreading holiday cheer through the gift of music.

For fans who weren’t able to attend Smith’s show at Royal Albert Hall in London in October 2022, now they can with Live From The Royal Albert Hall, an EP that captures the magic of the night through six songs selected by Smith. The project sees Smith stripping down some of their biggest hits, including a piano-led version of “Stay With Me” backed by a choir and a jazz-leaning rendition of “I’m Not the Only One.” They add a cinematic flair to “How Do You Sleep?” with the presence of an orchestra, in addition to an acoustic version of “Too Good at Goodbyes.” Smith gives a rock edge to “Dancing With a Stranger” before closing out the EP with a live performance of their current hit, “Unholy,” featuring an appearance by duet partner, Kim Petras.

“I definitely wanted this to be different to my other shows,” Smith shares with Apple Music. “I come from a theatre background and really missed that feeling on my last tour. It takes a village of talent to put on my shows, and it’s important for me now to showcase and celebrate the artists around me.”

Live From The Royal Albert Hall is part of the From Apple Music With Love series that gives listeners special gifts from participating artists through Wednesday (Nov. 30). The EP also arrives ahead of Smith’s upcoming 2023 album, Gloria, which drops on January 27.

“With this show, it was about adding a little Gloria to all my songs,” Smith adds. “I always want to change all the songs a little to fit the mood and the tones of whatever project I’m currently releasing. But I am also passionate about playing the songs the way people love them.”

“Unholy” has hit No. 1 on the Billboard Hot 100 and is nominated for Best Pop Duo/Group Performance at the 2023 Grammy Awards. 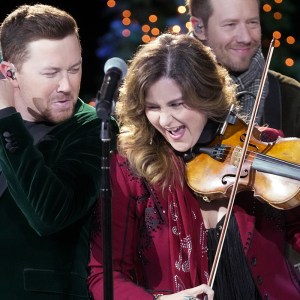